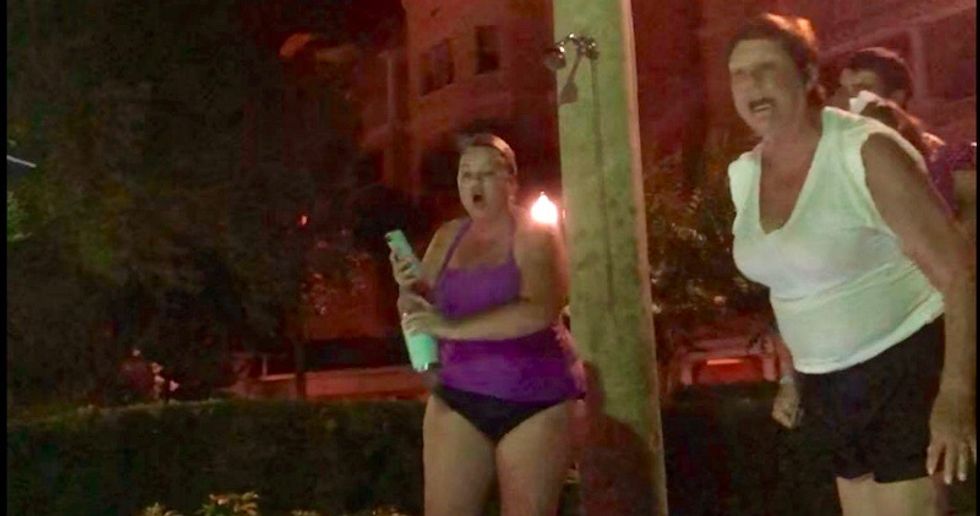 The racist family who attacked Dr. Covey Banks and her family/Screenshot

Dr. Covey Banks, a physician, and her family were vacationing in Florida when they were attacked in a hotel pool.

In a Facebook post with video of the family yelling and calling her a "black b*tch" and "n*gger," Banks described an encounter that started because she dared point the direction of the restroom to a woman who wanted a child to simply pee in the pool at the Omni luxury hotel.

The family came back and became belligerent—in the video, a man holding a can of Miller Lite and slurring his speech tells her to "get back in the pool" and "don't come to Florida" as she shoots video of the women attacking her—splashing Banks and her family and then finally escalating into intense verbal abuse.

What's worse, when Banks asked hotel security to act they refused to immediately remove the family from the hotel.

"My niece saw them going into their room, which was in the same building and on the same floor as ours and my kids were frightened when we seen them at the pool later Sunday evening," Banks writes.

Banks then called the police, who were also unhelpful in her telling, telling her that if she wanted to press charges they would both be charged.

"She screams, curses, yells racial slurs, obviously under the influence, swings at my niece but she got a scratch on her arm for being stopped and we’ll BOTH be charged?!" Banks wrote.

After she posted about the incident on Facebook, Banks was initially censored because of the other family's language though that was changed and her story has now been covered by Splinter News and Atlanta Black Star.