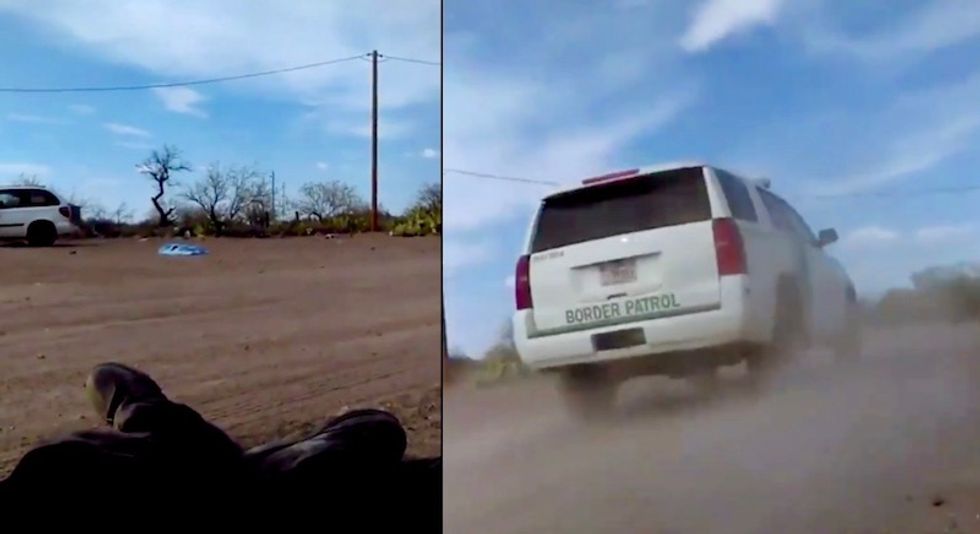 Officials from U.S. Customs and Border Protection are investigating an agent video who ran down a native American protestor with his SUV and drove away, reports BuzzFeed News.

In a video posted to Twitter by a Twitter account associated with the Tohono O’odham Nation, a man named Paulo Remes is hit by the vehicle. The driver doesn't stop, simply driving away as Remes lays on the ground.

"They just ran me over, bro," Remes says.

The Tohono O’odham Nation has land on the border with Mexico in southern Arizona, and opposes Trump's plan to build a wall.

Border Patrol told BuzzFeed that they are "actively investigating " and "fully cooperating with the Tohono O’odham Police Department as they investigate."

However, the agency would not reveal the driver's identity yet as the matter "is still under investigation."

Watch the shocking video and read a statement from the Tohono O’odham Nation below.

U.S Border Patrol ran over an O’odham man today on the Tohono O’odham Nation. This is an example of the fear O’odh… https://t.co/ZTeCpkz5eq
— Indivisible Tohono (@Indivisible Tohono)1529045802.0

Official press release from Paulo Remes & his family. Remes is the victim of violence in the video above. They ask… https://t.co/OmzkSvTml8
— Indivisible Tohono (@Indivisible Tohono)1529114097.0

Although QAnon isn't a religious movement per se, the far-right conspiracy theorists have enjoyed some of their strongest support from White evangelicals — who share their adoration of former President Donald Trump. And polling research from The Economist and YouGov shows that among those who are religious, White evangelicals are the most QAnon-friendly.

The Economist explains, "One prominent theory is that Americans who have no religious affiliation find themselves attracted to other causes, such as the Q craze. Another, posited by Ben Sasse, a Republican senator from Nebraska, is that modern strains of Christian evangelicalism which 'run on dopey apocalypse-mongering' do not entirely satisfy all worshippers — and so, they go on to find community and salvation in other groups, such as QAnon. Using The Economist's polling with YouGov, an online pollster, we can test both of these theories."