A calamity is now upon us -- especially if you're a woman 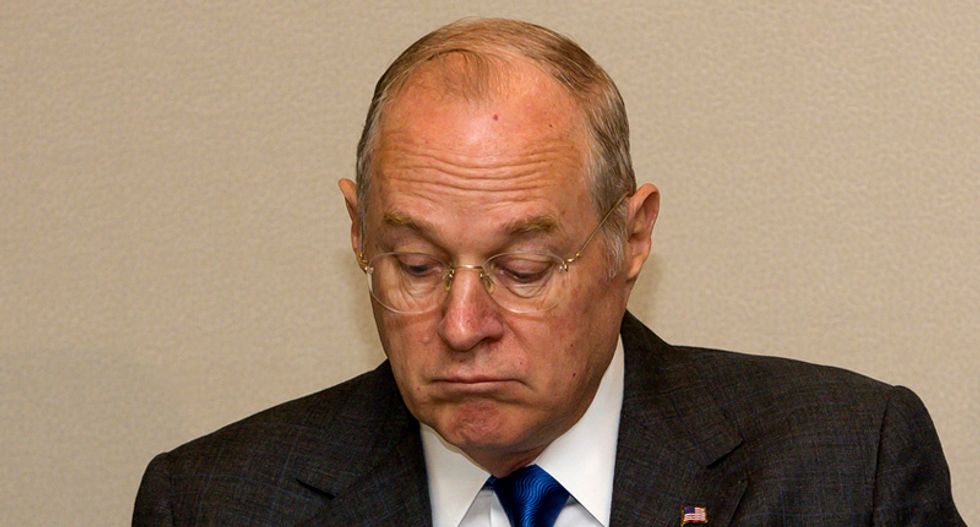 You can mark this date on your calendar. A calamity is now upon us.

Justice Anthony Kennedy, the last conservative on a 5-4 Supreme Court who could reasonably be persuaded to sometimes vote with the court’s liberals, has retired. You can read in many places what this could mean — for gay rights, for civil rights, for affirmative action, for the imposition of the death penalty, in easing the way for Trump to do his Trump-like worst, but let’s get down to the main issue.

If Donald Trump makes a Trump-like pick — which he almost certainly will — that could mean the end of Roe v. Wade. CNN and New Yorker court analyst Jeffrey Toobin tweeted that in 18 months, 20 states will have banned abortion. It would take five votes, and another Trump pick could make it five, depending, the experts say, on whether Chief Justice John Roberts would cast the precedent-shattering fifth vote.

It’s shocking, I know. Democrats have been warning for years that if Republicans get to appoint enough Supreme Court justices, this is where we’d be. Many Republicans, meanwhile, have been worried for quite a different reason — the concern that many of their suburban women voters would desert the party if Roe were killed.

For Democrats, who are powerless to stop any Trump appointment by themselves, despair isn’t too strong a word. A solid 5-4 Trump court means a solid 5-4 far-right Trump court, even more hardcore than the court of today which just upheld Trump’s Muslim ban and slammed public unions. Senate Republicans have sold their souls to Trump in order to get these Supreme Court picks.

Which is why Harvard law professor Jack Goldsmith, who clerked for Kennedy, said Kennedy’s retirement is the most consequential event in American jurisprudence since at least Bush v. Gore in 2000 and probably since Roe v. Wade in 1973.

Kennedy was the ultimate swing vote, a conservative Reagan appointee who, for 30 years, was persuadable on a court in which justice’s opinions are increasingly predictable long before a case arrives on the docket. He has been the justice lawyers knew they couldn’t win without.  If you’re into Supreme Court statistics, Kennedy was most often the deciding vote in 5-4 decisions in 20 of his 31 sessions on the court.

He wrote the opinion establishing same-sex marriage, striking down the death penalty for juveniles, upholding abortion rights. He also wrote the Citizens United opinion, voted against Obamacare, voted to reframe the 2nd Amendment’s right to bear arms and voted with the Colorado anti-gay-marriage baker.

Certainly, he was no liberal. He was also no anti-liberal ideologue. And now he’s gone, and it looks as Roberts, who is far to Kennedy’s right, would be the most moderate conservative.

And so, we’re being reminded again how we got to this place — how Senate Majority Leader Mitch McConnell didn’t allow Barack Obama pick Merrick Garland to get a vote. And how, after Trump’s victory, Neil Gorsuch was approved by the Senate only after McConnell put in the place the nuclear option, ending the filibuster for Supreme Court picks.

Gorsuch, who famously said there are no Republican judges and no Democratic judges, has been a Republican dream pick. So, sure blame McConnell’s hardball politics or blame a country that would select Trump as its president.

But as bad as things look, there might be a way out of this predicament. The only exit door would be through Roe v. Wade. Republicans hold what is for practical purposes a 50-49 Senate majority. John McCain is home in Arizona battling brain cancer. That means that one Republican could sink any Trump pick.

Two Republicans, Maine’s Susan Collins and Alaska’s Lisa Murkowski, are pro-choice and would be loath to cast the vote that ends Roe. And yet. There are at least two red-state Democrats and maybe more — we’ll start with West Virginia’s Joe Manchin and Indiana’s Joe Donnelly — who might well vote for the Trump pick even if Roe is at stake.

Sometime Trump critics — Arizona’s Jeff Flake and Tennessee’s Bob Corker, who are both retiring after this session — could possibly vote along with the Democrats, pushing for a more moderate Kennedy-like successor for Kennedy. Flake was already promising to hold up Trump judicial picks if the president didn’t moderate on tariffs. Problem is, no one really expects Flake, when the moment comes, to stand up to Trump. It’s not what he does.

If there’s any hope to stop the process, it will depend in large part on the public reaction to whomever Trump picks. It will be a fight, but we don’t know what kind of fight. McConnell says he will push the nomination for a vote by the fall, meaning before the midterm elections. Democrats are already calling him a hypocrite, noting that he wouldn’t let Garland’s nomination come to vote because, McConnell claimed, of the upcoming presidential elections.

But that’s just inside baseball. Many Republican senators won’t just be looking at this vote as it affects the Supreme Court.They’ll be looking to the midterms and how this battle could affect the Democrats’ long-shot chance to regain the Senate majority. Certainly most Democrats will be running in opposition to Trump’s eventual pick. For Republicans, losing the Senate would be a disaster, particularly if Democrats, as many expect, win back the House.

In other words, yes, a calamity is upon us. But as devastating as Kennedy’s retirement will be for those who think both sides should get a reasonable hearing, it’s not altogether clear where this calamity will land.