'How can we believe what you're saying?' Reporter steamrolls Sarah Sanders for lying about Trump Tower meeting 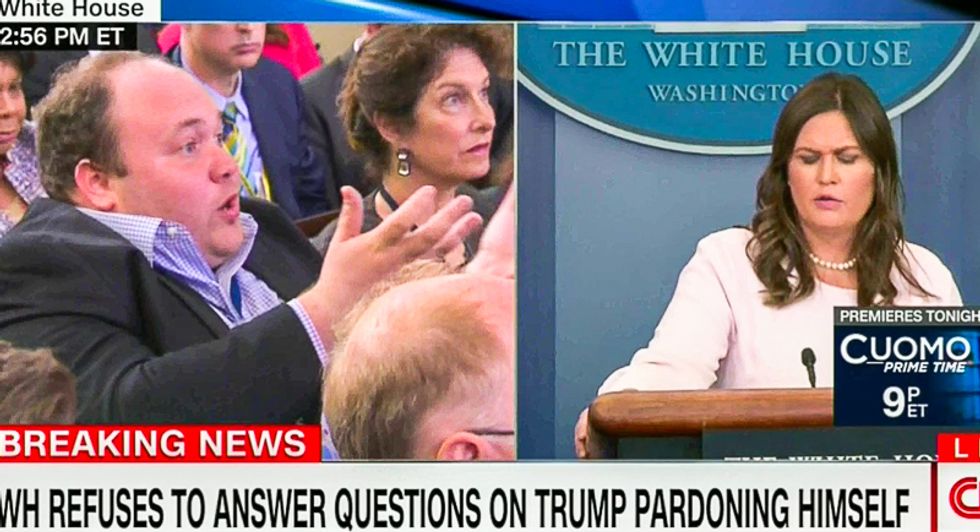 White House Press Secretary Sarah Sanders on Monday refused to say why she misled the American people when she claimed President Donald Trump did not "dictate" a letter in an attempt to absolve his son, Donald Trump Jr., after it was revealed members of the Trump campaign held a meeting with Russians to get dirt on Hillary Clinton.

At Monday's White House press briefing, one correspondent noted that a leaked letter from Trump's legal team revealed that Sanders had falsely claimed to reporters in 2017 that Trump did not "dictate" the letter.

"If you say one thing from the podium, that it wasn't dictated by the president," Washington Post reporter Josh Dawsey asked, "as long as you are saying something entirely different and contradicting, how are we supposed to know what to believe? How can we believe what you're saying from the podium if his lawyers are saying it's entirely inaccurate."

Sanders, however, declined to answer the question, instead referring it to Trump's outside attorneys.

But Dawsey pressed: "You literally said, 'He did not dictate.' The lawyers say he did. What is it?"

"I'm not going to respond to the letter from the president's outside counsel," Sanders stated robotically. "I would refer you to them for comment."