'That was a cheap shot': Fight breaks out on The View as Whoopi Goldberg schools Meghan McCain on poverty 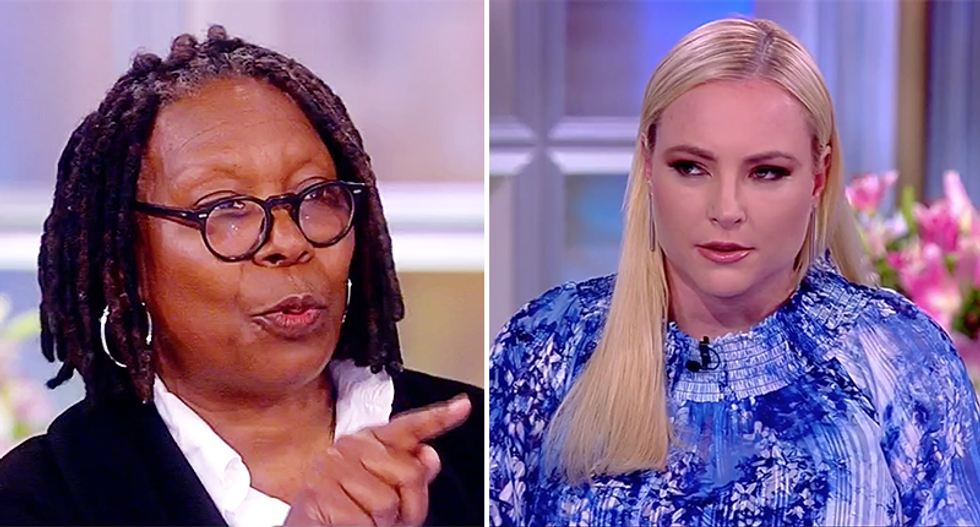 While the Civil War of the 1800s was about race and slavery, a full one-third of Americans believe that the United States is on the brink of another Civil War.

"They see that we're going backwards and it's about otherism," said co-host Sunny Hostin. "It's now about immigrants and Muslims. We're very much in that culture war."

She cited Jon Meacham's latest book about American history and noted that it isn't the first time children are being separated from their families.

"Black children were separated from their families throughout centuries," she continued. "Let's face it, a second Civil War, we are in the grasp of a Civil War now. A culture war."

Joy Behar said that she believes white elites and their supporters are fearful black and brown people will be the majority.

"It's getting to be more and more, and this is the fear that is -- they are stoking the fear of these supporters, that racist fear," she continued. "Your white privilege is going to be taken away. It's all fear-based. We live in New York City, OK? In New York City, every color of the rainbow gets along just fine."

She went on to say there is a great fear of this happening in Europe, particularly Italy.

"It's so upsetting to see it happening there. There's fear-mongering going on at the top. They're telling people, 'Oh they're coming from Africa, and they are going to take over your country.' It's so sickening to see this happen, and this is what is driving it. It's fear, fear, fear. So, remember that."

Meghan McCain cut in to say that she's glad to hear that people on the panel believe in the culture war now, because they didn't before. Whoopi Goldberg maintained that she doesn't agree.

"It sounds like black people, you know? I don't mean that in a crazy way" Goldberg cut in.

"I adore you as you know," McCain said. "But that was a cheap shot. I'm trying to explain."

"Oh, no, no, no. I know what you were trying to do. I get it. That's why I said it with a smile because people -- poor people are everywhere," Goldberg said back. "It's not just whites."

"I'm trying to explain. I have been to these places," McCain said.

"So have I, Meghan," said Goldberg, who came from poverty. "We have both been there. We know."

McCain cited Jon Meacham's comments from a previous episode warning that Trump will be reelected in 2020 if there are no lessons learned from Democrats.

"What I would like to know, is why do people think that the Republican Party with Trump in charge, is going to help them out of their poverty when they give tax breaks to the very wealthy of this country?" Behar closed.

Watch the argument below: