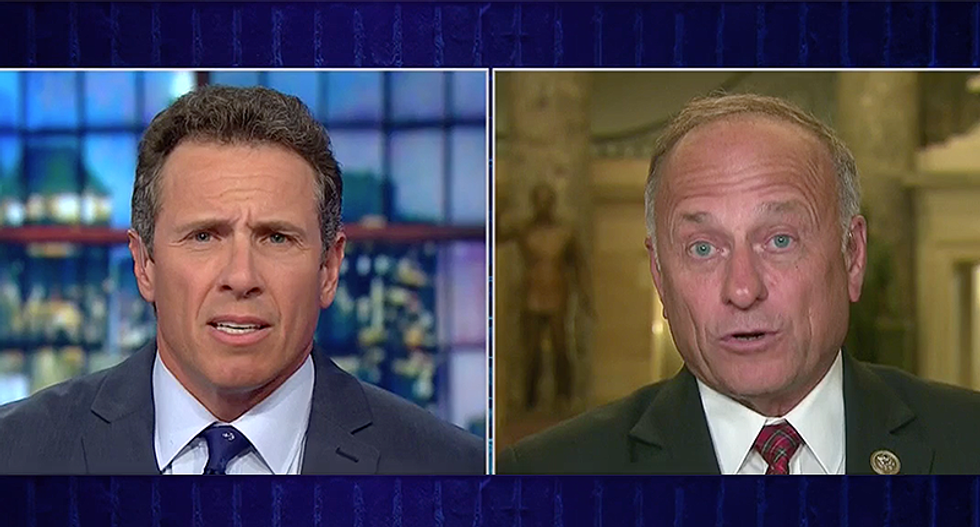 When Donald Trump talked about MS-13 and then pivoted to talk about immigrants coming from Latino countries he then followed the comment by saying "they're animals." While Trump may have meant MS-13 are animals, it isn't what he said. Democrats were quick to denounce the idea that immigrants were animals and Republican Steve King is now turning that into the claim that Democrats support MS-13.

"No. It's what you made it about. But go ahead," Cuomo fact checked.

"I didn't get involved in that dialogue myself," King replied. "I believe, I recall President Trump saying Chuck Schumer withdraw that offer, and --"

"No. He rejected the offer. They put the wall on the table," Cuomo corrected. "Then it became about money. Schumer says, 'You guys,' not you, you're in the House, but Republicans in the Senate wouldn't give him more money to earmark for the wall than the $25 billion that was for. Whether it's true or not, saying they're for open borders is selling a lie that's making them look like an enemy."

"You can define open borders differently," King reasoned. "They're promising citizenship to nearly everybody that can get into America unless they're the kind of criminals that cause them to be political criminals. I stood near the capitol building in 2005 or so when Kennedy went out to the west lawn, stood at the podium. The lawn was full of bussed in people. He said to them, he had an interpreter, I heard it in English, he said, 'Some say report to be deported. I say report to become an American citizen.'"

"Even that wouldn't be an open border," Cuomo corrected.

It ultimately devolved into a shouting match.