Is Donald Trump a liar? Maybe not — and that’s when things really get scary

There was and is no law requiring the children of undocumented immigrants to be taken away from their parents at the border. There is no crime wave caused by immigrants in Germany. (That nation’s historically low crime rate has fallen recently, and as in the United States immigrants are less likely to commit crimes than native-born citizens.) There was no measurable number of illegal votes cast in the 2016 election. Donald Trump’s inauguration did not draw the largest crowds in history, and in his first year he did not sign more legislation than any other president. (Indeed, he ranked last among post-World War II presidents.)

Do you want me to go on? I definitely don’t. But how are we to categorize Trump as an unquenchable fount of untruth, who by the Washington Post’s count passed 3,000 “false or misleading statements” as president more than a month ago? Is he a liar, a bullshitter, a gaslighter, a prevaricator, an ignoramus or a delusional sociopath whose relationship to the world of observable reality and established fact is at best “transactional”? I see two viable answers to this question:

The second answer is correct because Trump uses all those tactics and more, sometimes in ways that seem calculated and sometimes on what looks like pure instinct. Clear back to his first intervention in what could loosely be called politics, when he was a New York tabloid celebrity who took out full-page ads in four daily newspapers calling for the execution of the five young men accused in the “Central Park jogger case” of 1989, Trump has displayed little or no concern for the truth. 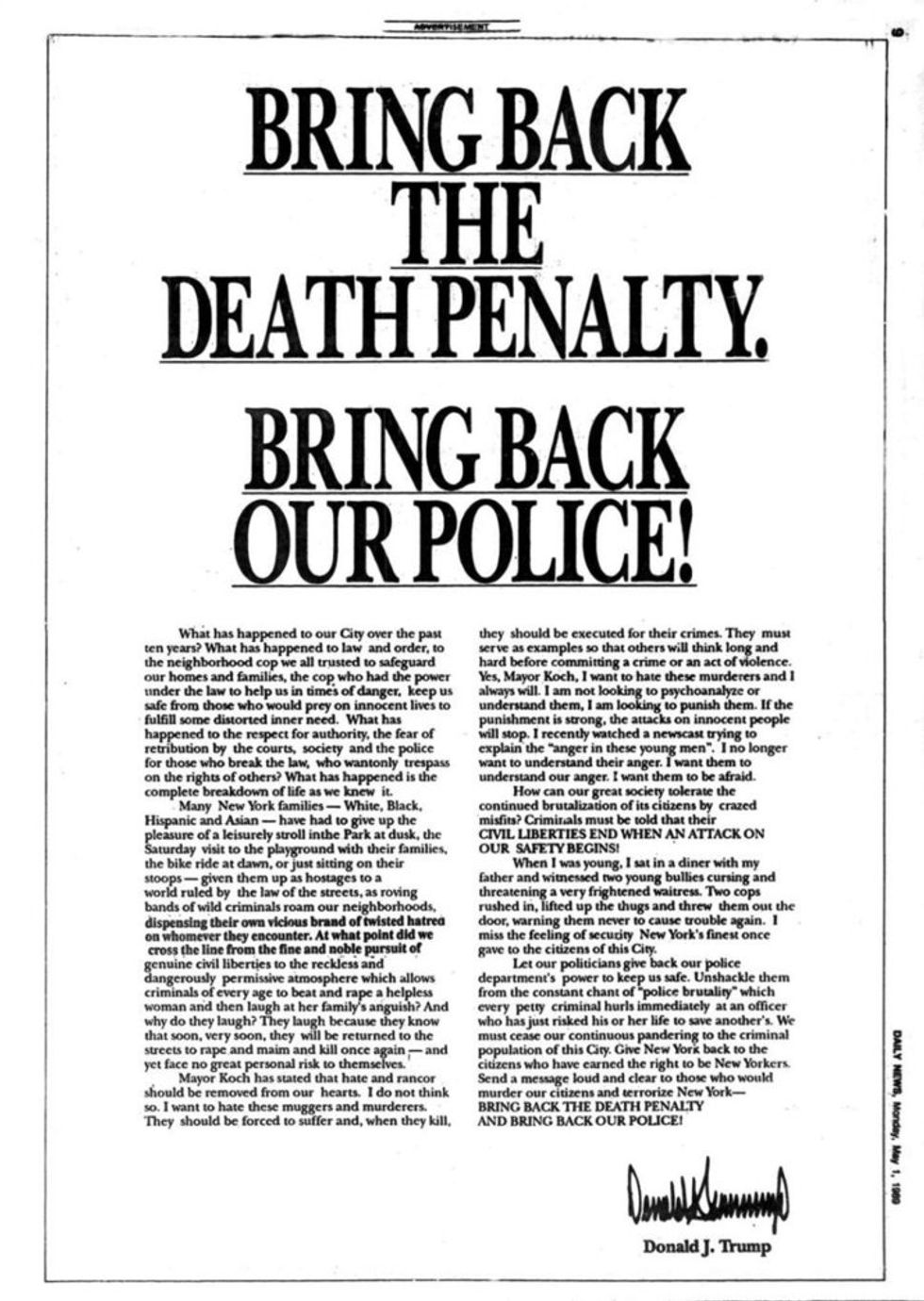 In fairness, Trump had no way of knowing that the Central Park Five, who spent years in prison for that horrific rape, would later be proven innocent. Everyone else thought they were guilty too. If their conviction was the most infamous miscarriage of justice produced by the overlapping racial panic and crime panic of that era, it certainly wasn’t the only one. (A remarkable data point, one the president likely views as fake news: There were roughly 2,000 murders a year in New York City between 1988 and 1993. Last year there were 290, the lowest recorded total since 1951.)

What’s far more important is that Trump didn’t care whether those five young black and Latino men were guilty or innocent. The facts of the case were beside the point; their lives were beside the point. (Black lives quite literally did not matter.) Those men were no more than sinister extras in a psychodrama fueled by pure emotion — fear, rage, bitterness, confusion — in which questions of law or fact were irrelevant.

For many white New Yorkers and white Americans of Trump’s generation, the Central Park rape case seemed to symbolize a moment of societal collapse, and to epitomize a racial, generational and existential threat. Their city, and their country, were being taken from them by roving bands of dark-skinned criminals: It’s precisely the anarchic, hellish social vision Trump repeatedly laid out during his presidential campaign and during his “American carnage” inaugural address.

I think it’s clear that the Central Park rape case -- and the climate of high crime, an uncontrolled drug epidemic and extreme racial tension that produced it — was a massively important event to Donald Trump, one that remains crucial to his understanding of the world. It’s worth observing that none of those things was imaginary, and that the urban environment was far more threatening than it is now.

But while most American cities, and New York in particular, have recovered from the traumas of that period, Donald Trump has not. He often appears to believe that nothing has changed since that era, or that it revealed truths about American society that today, out of “political correctness,” we avoid or ignore. His obsession with gruesome, violent crimes — with rape in particular — and his nightmarish fantasies about hordes of animalistic invaders bent on destroying America all echo the semi-mythical tabloid coverage surrounding the Central Park case.

I suspect that was also the moment when Trump clearly understood that he possessed a certain dark gift: He could tap into a deep current of popular rage and discord — at least in a certain proportion of the population — and channel it for his own purposes. The vicious attack on Trisha Meili, and the victimization of five young men who didn’t do it, began the process that made Donald Trump president. Along the way, of course, he also orchestrated the cynical hunt for Barack Obama’s birth certificate, endearing himself to the paranoid right. Correctly understood, I think that’s a later chapter in the same narrative.

That history also provides an invaluable key that helps unlock the nature, meaning and purpose of Trump’s ceaseless torrent of lies, which brings us back around to my original question about whether or not to call them lies. And to my first answer: It isn’t an interesting or useful question.

Sanctimoniously declaring that the president lies all the time and that it’s shocking and scandalous, although accurate, isn’t going to convince anyone of anything or make good things happen. There is literally no one in the United States of America who is likely to change their minds about Donald Trump on that basis.

To some degree that’s even following Trump down the troll-hole: His followers either believe that everything Trump says is true and everything the media says is fake news, or understand that he’s a blowhard and bullshitter who gets the libtards’ undies in a bundle and love him for it. In either case, standing there with a ledger counting up all the things he says that are false or misleading or simply not nice is playing an assigned role of schoolmarm in a drama Trump is directing.

But it’s also useless to slice and dice the degrees of prevarication in a way that sort of, kind of, almost shoehorns Trump into the admittedly debased tradition of democratic discourse. (I feel like I need scare-quotes around several of those words.) I recently hosted a Salon Talks conversation with ABC News legal affairs correspondent Dan Abrams, who offered an articulate, lawyerly defense of why certain Trumpian falsehoods qualify as lies while others don’t. Here's part of that exchange.

Abrams: I think it has to be on a case-by-case basis, right? It can't be every time the president says something that is not accurate, it's a lie. Because I think to say it's a lie, there has to be -- I don't want to say proof, but, you have to believe that he knows it's not true. He knows it's not true and he's saying it. In some of these cases, it's possible that people around him told him something that isn't accurate, right?

Did he believe that there was a law that required the separation of children from their parents at the border? Maybe Jeff Sessions told him that there was.

Well, yes. It is a more complex issue than people are sort of portraying it, right? As a result, on that issue, I wouldn't necessarily call it a lie. I would say that it's not true that there had to be legislation, or there had to be an executive order.

Or when he says, as he did the other day, that crime is way up in Germany and it's because of immigrants. That's two things that are false.

You can use Google and get the statistics.

That's true. He's wrong. But does that mean he's intentionally lying about it? Or is he just winging it and doesn't know what he was talking about? I don't mean to play lawyer here, but your question suggests, and I think rightly, that words matter. Whether we're going to use the word “lie” matters. I don't think just because he says that crime is up in Germany and crime is not in up in Germany, that means he knows crime is not up in Germany. I mean, all the examples ... it seems odd. Who knows? He may be lying. But regardless, we know that he's wrong.