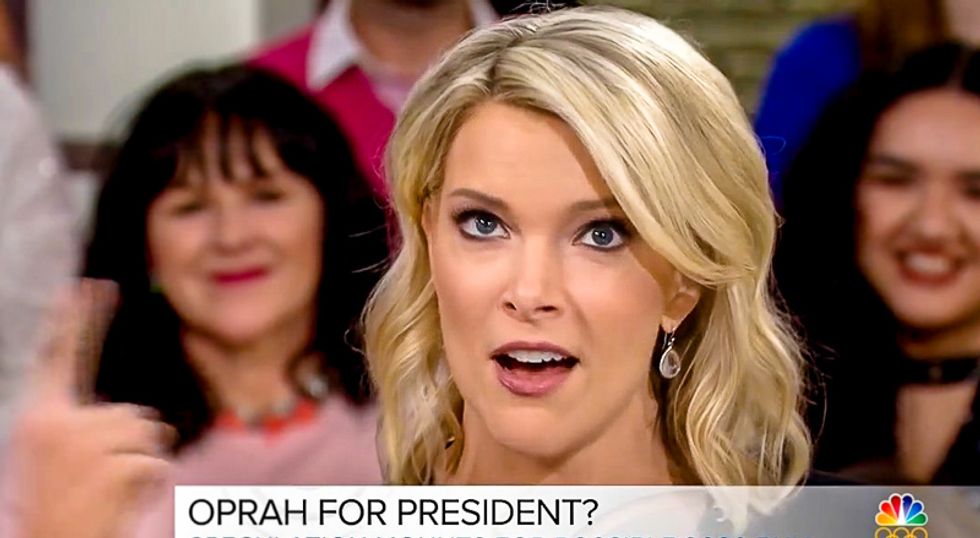 Megyn Kelly (NBC/screen grab)
As she transitioned from the highly-rated Fox News primetime line-up to mornings at NBC News, Megyn Kelly made many not-so-subtle attempts to re-brand herself as a hard-hitting journalist who was above the fray of partisan politics. “The truth is, I am kind of done with politics for now,” the political commentator infamously said on the premiere episode of "Megyn Kelly TODAY" back in September.Nearly one year later, the talking head who once stirred up racial tensions by declaring that Jesus and Santa were white on Fox News still struggles to instill this image upon a skeptical daytime television audience, where authenticity is everything.More evidence of this strife came as recently as Monday, when Kelly refused to call Republican President Donald Trump a liar in an awkward exchange with Dan Pfeffier, a former Obama administration official who now hosts the popular podcast "Pod Save America."In case you forgot, Trump is the presidential candidate who attacked Kelly as a "lightweight," a "highly-overrated" media professional and someone who had "blood coming out of her wherever" after the then-Fox News star grilled the business mogul about his gnarly history of misogyny during a debate of 2016 Republican primary contenders.In other words, Kelly has no reason to support a man who so blatantly used his power to attack her. But, her odd choice of words following an exchange with Pfeffier about White House Press Secretary Sarah Huckabee Sanders seemingly revealed that, despite switching networks, partisanship is still one value that Kelly holds dear.

When asked his opinion, Pfeffier, who served as a director of communications at the Obama White House, made it clear that Sanders knows exactly what she is doing.

"I think that she has made a decision to sacrifice her integrity for this position," he declared to big applause from audience members.

"It is the choice you essentially have to make to work for Donald Trump, which is you have to be willing to lie," he continued. "Because he is a liar. It is a proven fact."

Kelly broke in to share her preferred — or more saccharine, daytime TV-friendly — label for Trump.

"I prefer to say he does not have an adult relationship with the truth," she said.

But Pfieffer was not having it, and he called Kelly out on her own show.

"We can use whatever euphemism we want, but he is unwilling to tell the truth," Pfieffer said of the current president. "And we see that this weekend around blaming Democrats for a policy decision he made, when everyone knows that is not the case."

What Pfieffer was referring to was the bold-face lie that Trump made during an impromptu appearance on "Fox & Friends," which was broadcasting live from the White House lawn on Friday morning. Trump falsely claimed that Democrats had passed legislation requiring migrant children to be ripped apart from their parents when caught crossing the border.

“Democrats forced that law on the nation,” Trump vowed. (But it was his Attorney General Jeff Sessions who actually made this an official policy of the federal government, and he even cited the Bible to support his not-so-Christian actions.)

Out of nowhere, Kelly swooped in with a tried-and-true Fox News tactic: shifting (indirect) blame on Obama and his alleged record of dishonesty.

"I covered the Obama White House every night, and the biggest one was the Politifact 'Lie of the Year': 'If you like your plan, you can keep your plan.' So dishonesty happens in all administrations," she said, invoking Obamacare. "But, you're not wrong to call out this president on his constant lack of adult relationship with the truth. I've got to leave it at that."

To be clear, Kelly has a duty as a journalist to uncover the truth. It does not make her biased in any way whatsoever if she corrects falsehoods, especially ones as blatant and repetitive as Trump's. As of May 1, the president had told more than 3,000 false or misleading claims since assuming the Oval Office, according to Washington Post fact-checkers. (That averages out to about 6.5 untruths each day.)

Instead, Kelly continues to peddle "alternative facts" which support her political beliefs — just as she did for years on Fox News. If you are a Republican, it sure sounds a lot better when "lack of adult relationship with the truth" roles off of your tongue instead of the word "liar." And, for this journalist, it sure seems hard to admit the truth.

The segment only got more awkward as it came to a close. As Kelly said goodbye, she begged Pfeiffer not to generate any more bad publicity for her embattled third hour of "TODAY."

"Dan, I'm going to listen to the podcast. I haven't heard it, but it's very buzzy," Kelly said, showering her guest with praise. "And, I'm just going to hope I'm not going to hear anything negative about myself."

That strange request raises a question: Are Kelly's ratings so dismal that she has actually decided to openly ask her peers in the media not to generate any more negative publicity about her embattled show? Is this a last-ditch effort to save it?

On April 25, the Wall Street Journal published an explosive article about the return on investment the executive Andy Lack has so far received for the big bet he placed when he wooed Kelly away to his more-mainstream news outlet. The article, titled "NBC bet $69 million on Megyn Kelly – then viewers vanished," reads:

Since joining “Today,” Ms. Kelly is averaging 2.4 million viewers an episode, 18% below what the hour was pulling in last season, according to data from Nielsen. The ratings have declined sharply for the past two months, dipping to a low of 1.9 million, after getting a lift from the network’s coverage of the Winter Olympics in February.

Among adults aged 25 to 54, the key demographic that the show targets, ratings are down 28% since last season.

Ms. Kelly’s ratings are also hurting the 10 a.m. hour of “Today” with Hoda Kotb and Kathie Lee Gifford, according to Nielsen data. That hour of the show, which focuses on lighthearted lifestyle and celebrity news, is down 6% in viewers and 19% among adults 25-54.

The performance of “Megyn Kelly Today” has allowed its chief rival, Walt Disney Co.’s syndicated chat show “Live with Kelly & Ryan,” to more than double its lead over NBC in that hour to 747,000 viewers.

Last week, rumors that Kelly would swap time slots with Gifford and Kotb's powerhouse fourth hour in an effort to "limit the damage done" by her show to the lucrative NBC News franchise's ratings were first published by the gossip column "Page Six."

Separately, Kelly's Sunday night news magazine – which has generated plenty of controversy for its soft-ball interviews with Russian President Vladimir Putin, whose country attempted to thwart the results of the 2016 U.S. presidential election, and conspiracy theorist Alex Jones, who claimed the Newton mass shooting "pretty much didn't happen" – now only airs "periodically."

Does Kelly also "not have an adult relationship with the truth" when it comes to how the American public perceives her role as a journalist?