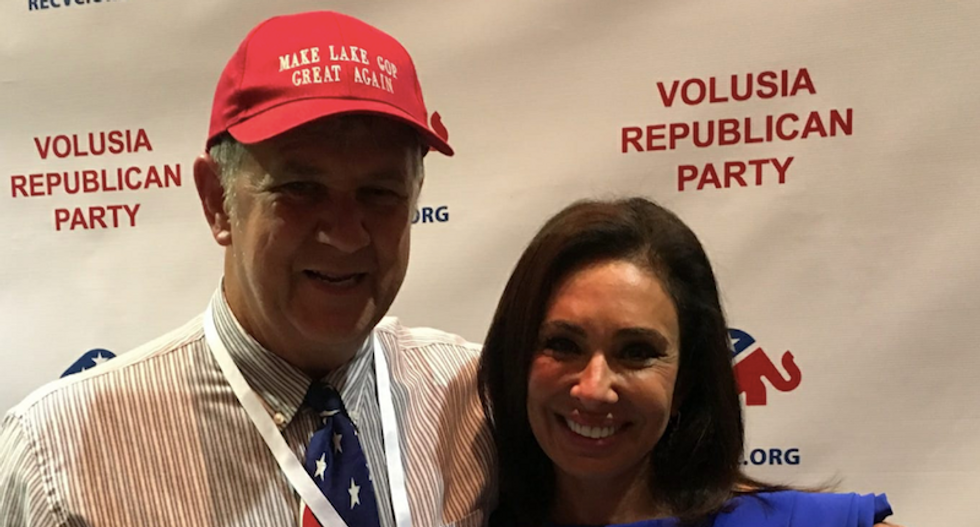 A Lake County Republican Committee man issued a very "sorry, but ... " style apology on Facebook to his "scores" of black friends.

"For those who were offended in anyway about my comment on FB regarding the Rosanne Barr tweet about Valerie Jarrett, I apologize that my attempt at humor was crass and inappropriate, at the least." Ralph Smith, pictured here in his Make America Great Again-inspired hat, swiftly switched gears.

"With that said, those who wish to paint me as racist or bigoted can kiss off. My knowledge of Valerie Jarrett, as a black woman, was only understood yesterday. My understanding was that she was of Iranian descent, a darker than average Caucasian, much like myself. Had no idea of her ancestry," he claimed.

Smith then doubled down on the right-wing talking point that paints a false equivalency between conservatives calling Valerie Jarrett an ape and liberals calling President Trump an orangutan.

"Once again, such does not excuse my juvenile attempt at humor, but acknowledging the obvious similarities in appearance makes one no more bigoted or racist than champions of the left, like Jimmy Kimmel, Bill Maher or Wanda Sykes and others who characterize our President as an orangutan," he said.

"So to my scores of black friends, if my adolescent attempt at humor offended you in anyway, I ask your forgiveness. And to all my friends, of all pigmentations, I will be more intentional in my attempts at humor, sarcasm and satire and supporting or sharing things that are tasteless or hurtful to others. May God Bless all of you and forgive us our trespasses as we forgive others!"

Smith originally posted an image of Valerie Jarrett and a character from Planet of the Apes on Facebook with the caption, “And the issue with Roseanne is?”

He told the Daily Commercial that he thought Roseanne's joke was funny and that he didn't see what the big deal was.