Here's how Comey, Mueller and Christopher Steele are connected to the FIFA World Cup in Russia 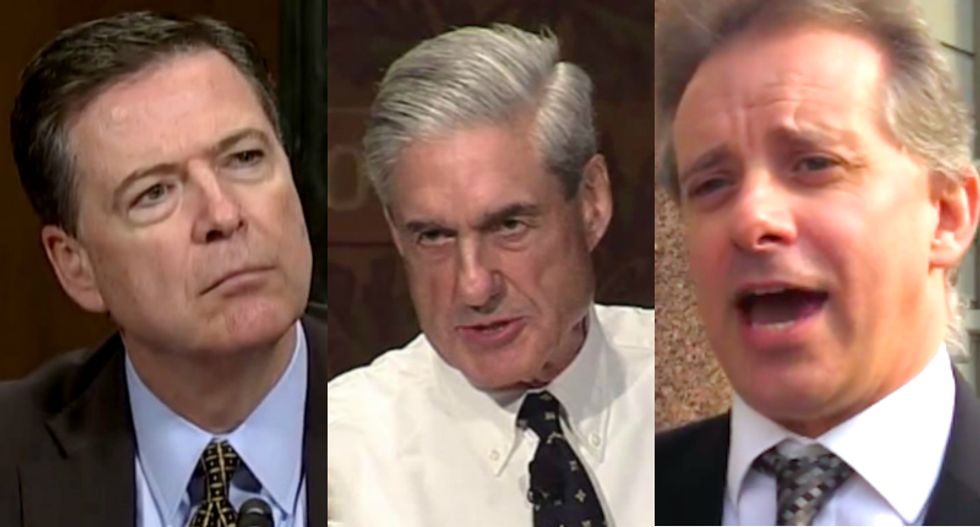 Though they're best-known for their important connections to President Donald Trump and his alleged ties to the Kremlin, former FBI director James Comey, current special counsel Robert Mueller and ex-British spy Christopher Steele all have something else in common — investigations into the corruption surrounding FIFA's decision to hold the 2018 World Cup in Russia.

In Friday's edition of "The Daily," a New York Times podcast, host Michael Barbaro outlined the ways each of the three men participated in unraveling the FIFA corruption scandal in their pre-Trump lives. Barbaro interviewed BuzzFeed News reporter Ken Bensinger, the author of a forthcoming book on the subject, about their roles.

Like the Olympics, the location selection for the World Cup is often a competition of world prestige and power. Russia, Bensinger noted, was barely considered a black sheep candidate against England, viewed as the frontrunner by the time it submitted its bid in 2009. By December 2010, however, FIFA shocked the world when it announced that Russia was to host the 2018 tournament.

It was "a mystery" that Russia beat out the UK and the other countries bidding to host the games — except to Steele, the former MI6 spy who penned the infamous "golden showers" dossier about Trump and Russia. His role as a spy, the BuzzFeed reporter continued, gained him "contacts throughout Russia" who supplied him with information about the country's feat.

After quitting his role at MI6, Steele opened a private intelligence firm called Orbis — "and one of his first clients," Bensinger said, was the forces behind the British bid to host the 2018 World Cup. In essence, he did opposition research for the UK in the same way he did for various Republican candidates and the Democratic Party on Trump.

In the spring of 2010, Steele discovered that "funny things" began happening with FIFA, including "untoward behavior on the behalf of Russia," the report continued. FIFA voters were allegedly bribed with paintings that may have been from St. Petersburg, Russia's Hermitage Museum — including, one unconfirmed accusation claimed, a Picasso. There were also rumors of a "vote-swapping" deal between Russia and Qatar that involved a proposed gas pipeline in the Arab country, as well as the normally-private Russian owner of London's Chelsea soccer club becoming "very vocal" in support of his homeland's bid.

Along with informing his client about Russia's World Cup bid maneuvers, Steele also told a friend who worked as a Brooklyn, NY FBI agent "specializing in organized crime." The FBI in that era was, Bensinger noted, particularly interested in "trans-national crime" — and the initiative investigating it was spearheaded by none other than Mueller.

Though the English did nearly nothing out of fear of offending FIFA, the United States took a different approach. The Brooklyn FBI agent convinced a prosecutor to secretly open a case investigating the suspected organized crime surrounding the Russians' FIFA bid the summer of 2010, but didn't make any breaks until late 2011 when they flipped an American millionaire tax-dodger involved in the scheme. The investigation continued for years with the assistance of the Justice Department as they continued to flip informants.

Listen below, via Stitcher and the Times.