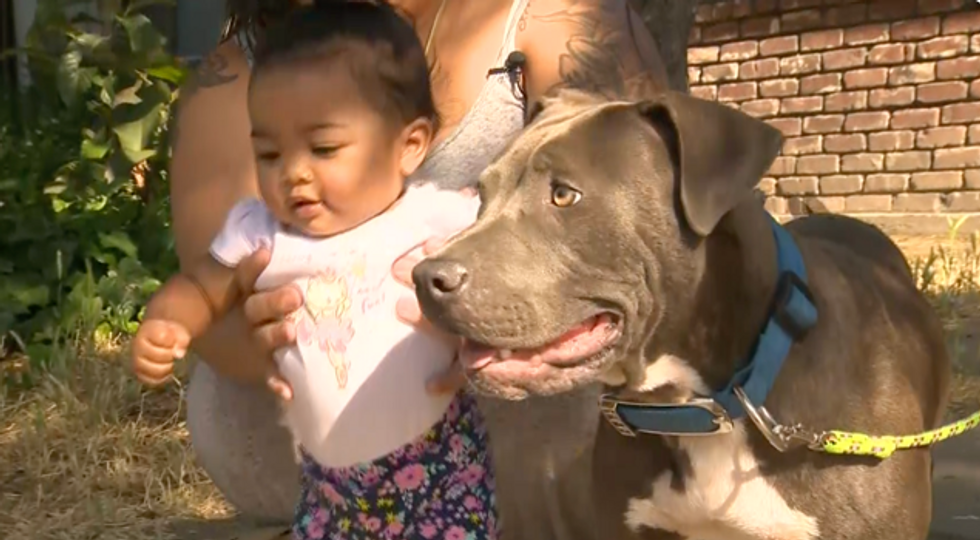 An eight-month-old pit bull puppy is credited with saving her family's life after she barked to alert them to a fire and attempted to drag a seven-month-old baby to safety by the diaper.

Latana Chai told Sacramento's KCRA that Sasha, her pit bull puppy, barked and threw herself against the door of their Stockton, California fourplex early on the morning of June 3. When Chai went outside to investigate, she saw that a fire from the nearest unit had spread to hers'.

When she ran back inside, she saw Sasha trying to drag Masailah, her seven-month-old infant, by the diaper off of the bed.

"I grab my baby. I grab Sasha. And, I grabbed my phone and I called 911," Chai told KCRA, describing what happened next.

"(Sasha) saved everybody," the mother continued. "Because if it wasn’t for her, I don’t think that any of us in this complex would have known anything... If she wasn’t barking or really going at the door like that, I probably wouldn’t have known nothing."

Chai's home and her neighbor's apartment have been condemned since the fire. Her cousin Christina White set up a GoFundMe page to pay to replace items lost in the fire and find a new home — and has reached more than half her $6,000 goal.

"[Sasha] saved us all," a statement on the crowdfunding page reads. "She is our hero. Without her, we probably would've never made it out."