House GOP leader defends Republicans who ignore Trump's political pardons: 'This is what checks and balances are' 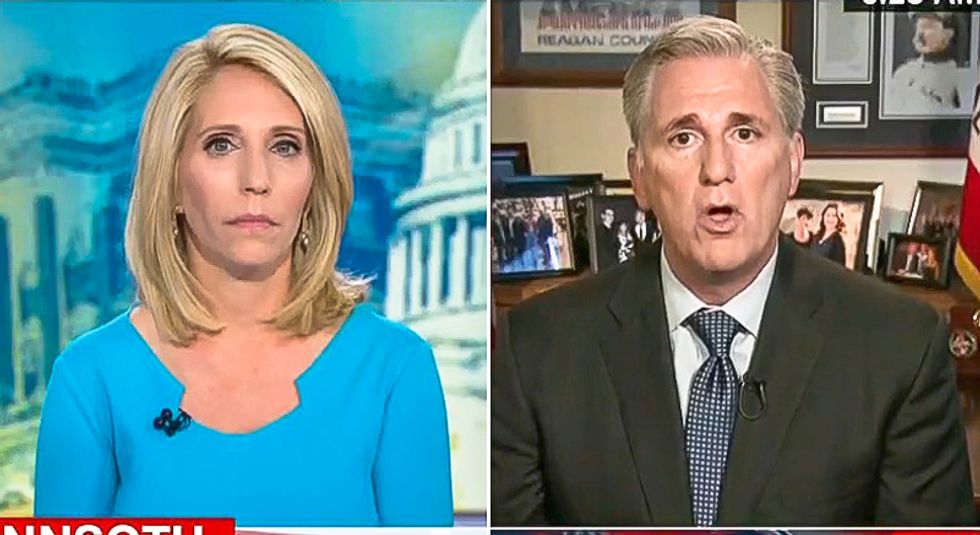 During an interview with CNN's Dana Bash, McCarthy repeatedly dodged questions about lies Trump attorney Jay Sekulow told in an attempt to clear the president of wrongdoing with regard to a meeting with Russians at Trump Tower.

McCarthy insisted that the matter had been exhaustively investigated by House committees.

"The Constitution vests incredible oversight responsibility in you and the House of Representatives," Bash noted. "Does the president, any president have the sweeping powers [to fire former FBI Director James Comey and pardon political allies] that his legal team argues he has?"

McCarty insisted that House investigations have "found no collusion" with Russia, but he declined to answer the question.

"Take the name Donald Trump out of this, put the name Hillary Clinton in," the CNN host suggested. "If a Democratic president started pardoning his political allies, you'd go bonkers. And we're hearing crickets from Republicans now. What happened to checks and balances?"

"This is exactly what checks and balances are," McCarthy chuckled. "The president has the power of the pardon, just as his pardoned a boxer because he was African-American was put [in jail] illegally because he married a white woman. Did you talk about that?"

"The president has the power to pardon," McCarthy continued. "That is part of the process of checks and balances... That is why the House looked at, was there any collusion in the process. We've gone on for more than a year."

"This is separate," Bash explained. "This is about pardoning his political allies."

"That would be a question for the president," McCarthy insisted.