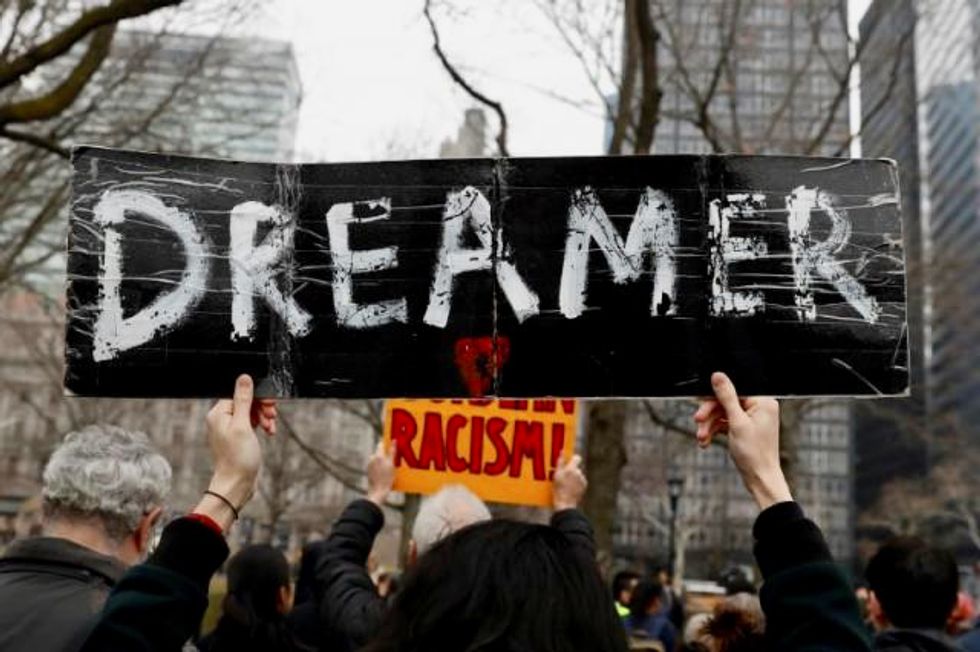 Activists and DACA recipients march up Broadway during the start of their 'Walk to Stay Home,' a five-day 250-mile walk from New York to Washington D.C., to demand that Congress pass a Clean Dream Act, in Manhattan, New York, U.S., February 15, 2018. REUTERS/Shannon Stapleton

An effort in the U.S. House of Representatives aimed at forcing a debate on bipartisan legislation protecting “Dreamer” immigrants from deportation edged closer to success on Tuesday when two more Democrats joined the effort.

A petition was launched last month by centrist Republicans who say they are tired of inaction on immigration in the Republican-controlled Congress.

They want the House to debate and vote on several bills including a bipartisan one to protect the Dreamers, immigrants who were brought illegally as children to the United States.

The issue has bitterly divided Republicans, but nearly all Democrats favor holding the debate and had signed the petition as of late last month. However, there were three Democratic holdouts from the Texas border region.

On Tuesday, two of these holdouts, Representatives Vicente Gonzalez and Filemon Vela, said they will sign, leaving the effort just three names short of the 218 required to force a debate and votes on the House floor.

The sponsors have said they expect to have enough signatures, but House Republican leaders oppose the effort and have called a party meeting for Thursday to discuss the issue.

Gonzalez said in a statement that he had been hesitant to sign the petition because of “concerns that it could open the flood gates for members across the aisle to hold Dreamers hostage in exchange for a border wall” that President Donald Trump wants along the southwest border with Mexico.

Gonzalez said he was signing with the intent of helping the Dreamers, but added, “I will not accept” a fix “that includes funding for a border wall.”

Vela wrote a similar statement on Twitter, saying he would vote to help the Dreamers “but not for any measure that includes border wall funding.”

Several House Republicans also oppose the construction of a wall and instead favor more high-tech solutions to border security.

One other Texas Democrat, Representative Henry Cuellar, still has not signed the petition, as well as a large number of Republicans.

Representative Steny Hoyer, the No. 2 House Democrat, said the goal was to have all 193 Democratic lawmakers sign the petition. It calls for debate and votes on four different bills to replace the Deferred Action for Childhood Arrivals (DACA) program, which Trump ended on March 5.

Several of the Republicans who favor allowing Dreamers to study and work legally in the United States and get on a path to citizenship represent districts with large Hispanic populations and fear a backlash if Congress fails to act.