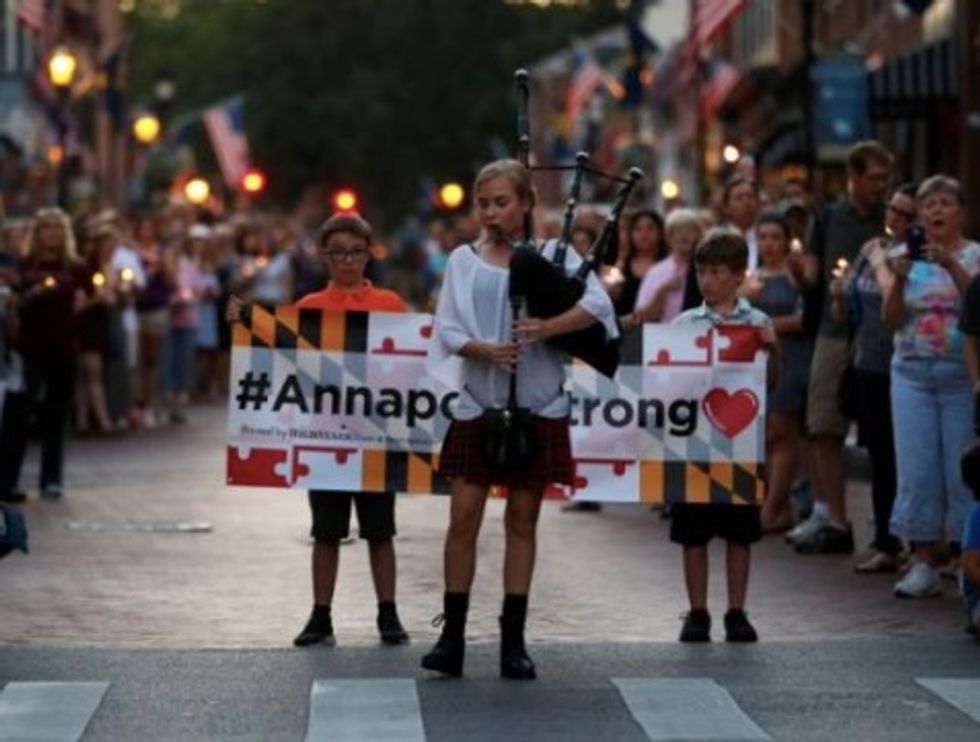 People line the street as a woman plays "Amazing Grace" on a bagpipe during a candlelight vigil in downtown Annapolis to honor the five people who were killed inside the Capital Gazette newspaper the day before in Annapolis, Maryland, U.S. June 29, 2018. REUTERS/Leah Millis

Hundreds of people gathered on Friday evening to remember the five people gunned down at a community newspaper office in Annapolis, Maryland, one of the deadliest attacks on journalists in U.S. history.

The vigil came hours after accused gunman Jarrod Ramos was denied bail during a brief hearing in Anne Arundel County criminal court. Ramos, 38, appeared by video link from jail and did not speak during the proceedings.

More than 300 mourners, many of them carrying candles, walked slowly through the streets of Annapolis, the state capital, near the capitol dome, which was lit up, its flags flown at half staff in honor of the shooting victims.

All five of those slain worked at the Capital Gazette newspaper. Ramos is accused of opening fire on Thursday over a longstanding grudge against the paper.

He is accused of entering the Capital Gazette office, firing through a glass door with a 12-gauge shotgun, hunting for victims and spraying the newsroom with gunfire as reporters hid under desks and begged for help on social media.

Prosecutors said Ramos barricaded a back door to prevent people from fleeing.

“The fellow was there to kill as many people as he could,” Anne Arundel County Police Chief Timothy Altomare told a news conference, adding that the suspect was identified with facial-recognition technology.

Altomare said evidence found at Ramos’ home, in Laurel, Maryland, showed that he planned the attack and that the pump-action 12 gauge shotgun used was legally purchased about a year ago.

The five killed were Rob Hiaasen, 59; Wendi Winters, 65; Rebecca Smith, 34; Gerald Fischman, 61; and John McNamara. All were journalists except for Smith, who was a sales assistant, police said. Hiaasen was the brother of best-selling author Carl Hiaasen.

The Capital newspaper, part of the Gazette group, published an edition on Friday with photographs of the victims and a headline “5 shot dead at The Capital” on its front page. The editorial page was left blank but for a note saying the editors were speechless.

Photographs widely shared on social media showed staffers working on laptops in a parking garage to produce Friday’s edition while they waited to learn the fate of their colleagues.

Annapolis Mayor Gavin Buckley said he was proud of the journalists who had “soldiered on” in the face of the tragedy.

“These guys, they don’t make a lot of money. They do journalism because they love what they do. And they got a newspaper out today,” Buckley told Fox News.

U.S. President Donald Trump, who has had a combative relationship with the media since his 2016 election, was asked by reporters traveling with him on Air Force One whether he was reconsidering calling journalists “enemies of the people.”

“Obviously the press has treated me very badly, but in the meantime I’m president ... I guess they didn’t treat me badly enough,” Trump said, calling the shooting rampage a “disgrace.”

Ramos in 2012 sued Eric Hartley, a columnist with Capital Gazette, and Thomas Marquardt, then its editor and publisher, court filings showed.

A column by Hartley contended that Ramos had harassed a former high school classmate on Facebook and that he had pleaded guilty to criminal harassment, according to a legal document.

The court agreed the article was accurate and based on public records, the document showed. In 2015 Maryland’s second-highest court upheld the ruling, rejecting Ramos’ suit.

According to a WBAL-TV reporter who said she spoke with the woman who was harassed, Ramos became “fixated” with her for no apparent reason, causing her to move three times, change her name, and sleep with a gun.

Neither Hartley nor Marquardt is still employed by the paper and neither was at its offices on Thursday.

Ramos tweeted at the time of the lawsuit that he had set up a Twitter account to defend himself, and wrote in his biographical notes that he was “making corpses of corrupt careers and corporate entities.”

Phil Davis, a Capital Gazette crime reporter, recounted how he was hiding under his desk along with other newspaper employees when the shooter stopped firing, the Capital Gazette reported on its website.

The newsroom looked “like a war zone,” he told the Baltimore Sun. “I don’t know why he stopped.”

Authorities responded to the scene within a minute of the shooting, and Ramos was arrested while hiding under a desk, the shotgun on the floor nearby, police said. He will face either a preliminary court hearing or grand jury indictment within the next 30 days. Maryland does not have the death penalty.

Capital Gazette runs several newspapers out of its Annapolis office. They include one of the oldest newspapers in the United States, The Gazette, which traces its origins back to 1727.