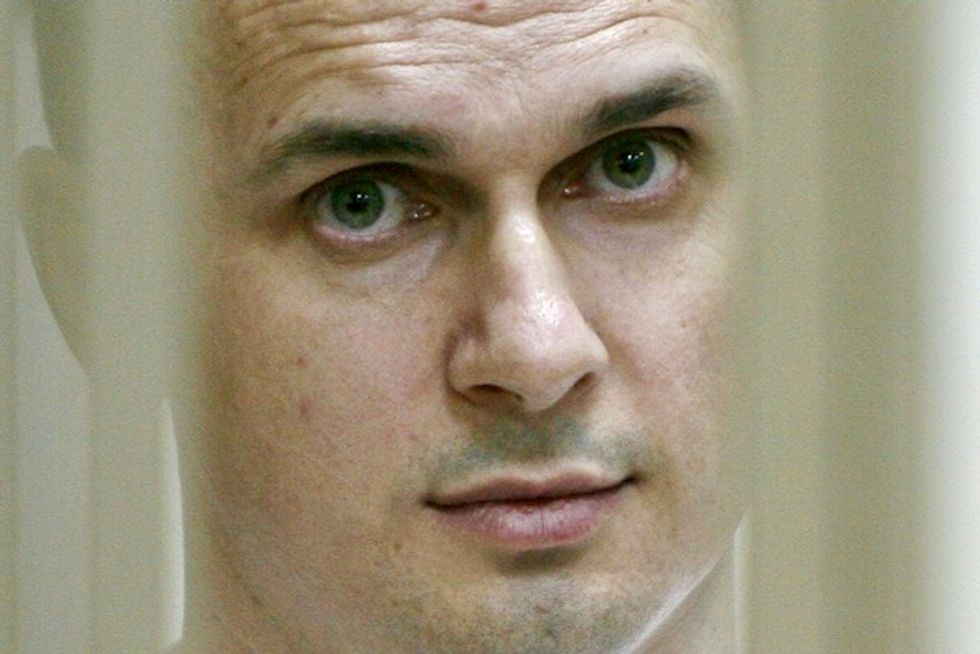 When the World Cup kicks off in Russia on Thursday Ukrainian film director Oleg Sentsov, who is serving a 20-year prison sentence in Russia, will have spent a month without food.

Sentsov says he is ready to die and the worst effects of his high-profile hunger strike are expected to kick in just as the month-long football extravaganza gets into high gear.

He is demanding Moscow release dozens of Ukrainian political prisoners and timed his protest to exert maximum pressure during Russia's chance to shine on the world stage.

President Vladimir Putin has recently hinted that backdoor talks to exchange prisoners with Kiev were apparently under way, raising hopes for the release of the 41-year-old filmmaker and others languishing in Russian jails.

But details remain scarce and it is still anyone's guess whether Ukraine and Russia will agree on a swap -- and even if they do, whether it will be in time to save Sentsov's life.

"It would be really bad for Putin if these negative things that could become top world news happened during the tournament," said Andrei Kolesnikov of the Carnegie Moscow Center.

Sentsov has carefully prepared for the protest, which he began on May 14, reducing his food intake over several weeks in the high-security prison in Russia's far north.

"I will not back down," he said in a letter published on Saturday.

Doctors have warned him that his kidneys may soon fail as the irreversible consequences of the hunger strike begin.

Sentsov -- who has agreed to be administered a glucose drip -- has already lost around eight kilogrammes (17 pounds).

However doctors have also threatened to start force-feeding him through a stomach tube, a procedure many activists describe as a form of torture.

The director is best known for his film "Gamer", which screened to critical acclaim at the Rotterdam Film Festival in 2012.

A vocal Kremlin critic, Sentsov was detained in Crimea in 2014 after Russia annexed the peninsula from Ukraine.

Supporters say Russia wanted to make an example of him with the stiff sentence on charges of masterminding arson attacks, which the filmmaker denies.

His cousin Natalya Kaplan has urged the West to intervene to save the father of two children, one of whom suffers from autism.

She said Sentsov has struggled with health problems since childhood but has always been a man of true grit.

Supporters have launched a global campaign to secure his release, staging protests in dozens of cities in Europe, the United States and the Middle East.

Several activists fasted in solidarity with him but quickly stopped, admitting they were not strong enough.

In a letter to Putin ahead of the World Cup, dozens of prominent authors including Margaret Atwood and Ian McEwan called for his release "in the spirit of this unifying global event".

But many are sceptical that the Kremlin was ready to release all Ukrainian political prisoners, with one supporter suggesting Sentsov could be just flown out of Russia.

But whether or not the filmmaker is released, a crackdown on dissenters continues unabated, critics say.

Campaigners have called on FIFA to use its leverage with the Kremlin to address Russia's rights abuses.

With global attention on Russia, Moscow "must decide what they want the legacy of this World Cup to be," said Amnesty International.

Human Rights Watch added: "The FIFA World Cup starting on June 14, 2018, will take place during the worst human rights crisis in Russia since the Soviet era."

In a sign that world football's governing body sought to address at least some of these concerns, FIFA criticised the detention of Oyub Titiyev, head of rights group Memorial's Chechnya office, on drug possession charges.

Some have called for a boycott of the World Cup, such as Ukrainian artist Andriy Yermolenko.

To draw Western attention to Moscow's role in the four-year conflict in eastern Ukraine, Yermolenko made a series of graphic drawings that have become popular on Facebook.

One depicts a man playing football in a cemetery; another shows Zabivaka the wolf, the World Cup mascot, about to kick a human skull, clutching a human hand in his teeth.

"They are killing my country but many cannot understand this," Yermolenko told AFP.

"At the same time there is this celebration of football and we are being told that sport is outside politics. These things make me hurt."

What you need to know about the Supreme Court case that could overturn Roe v. Wade

The Supreme Court will hear arguments on Wednesday in a case that could end almost 50 years of guaranteed abortion rights. Audio from the arguments will be streamed on the Supreme Court’s website, beginning at 10 a.m.

"The grand jury subpoena, issued in September by the U.S. attorney’s office for the District of Columbia, sought communications and other records related to fundraising and accounting by groups including Defending the Republic, a Texas-based organization claiming 501(c) 4 nonprofit status, and a PAC by the same name, according to the documents and a person familiar with the investigation who spoke on the condition of anonymity to share details of the probe," the newspaper reported. "The subpoena reviewed by The Post was signed by Assistant U.S. Attorney Molly Gaston, who is also handling politically charged matters related to the Jan. 6 attack on the Capitol, including contempt of Congress charges brought against former Trump adviser Stephen K. Bannon for refusing to testify in front of the House committee investigating the pro-Trump riot."