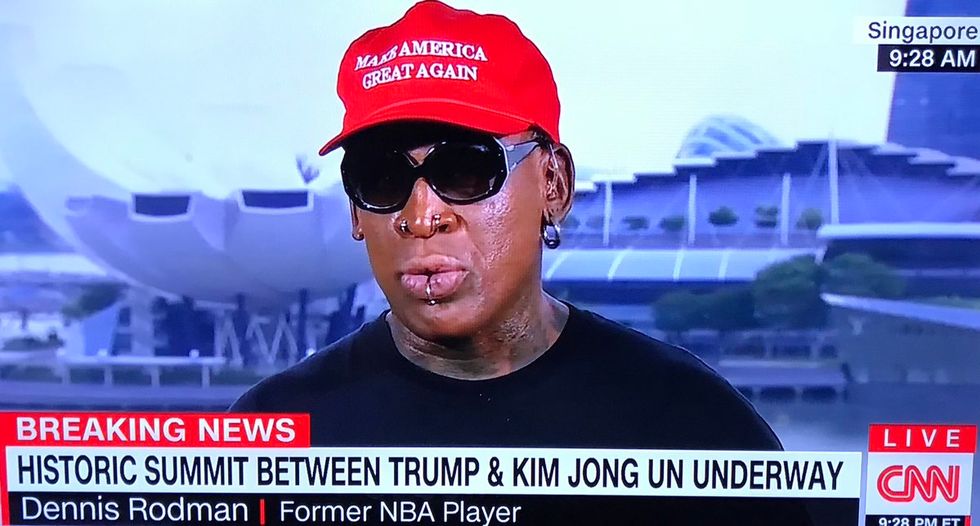 It's a surreal image: Dennis Rodman, standing in Singapore, wearing a "Make America Great Again" hat and sunglasses, giving an interview through tears as he cheers for President Donald Trump.

But it happened, and there's video to prove it.

In the interview, Rodman bawls while telling CNN host Chris Cuomo about the death threats he received when he first came back from meeting with Kim Jong-un in 2013. He developed a relationship of sorts with the dictator, despite much criticism that he was being used for PR by the Kim regime and that he was, at best, showing kindness to a murderous autocrat, and, at worst, being developed as a North Korea intelligence asset.

He also spoke of how happy he was that Trump had agreed to meeting with Kim, which no U.S. president has done before.

"It's amazing, it's amazing," Rodman said. "I believed in North Korea."

He added: "But I kept my head up high, brother. I knew things were going to change. I knew it!"

Near the end of the interview clip, he tells Cuomo — through tears — "I'm so happy!"

Yet the optimism about the summit — for which Trump seemed completely unprepared — is hardly warranted. North Korean observers have noted that the country's dictatorial ruling family has always wanted to meet with a U.S. president for the symbolism and recognition inherent in such a summit. That, it seems, Kim has now received, and given nothing in return.