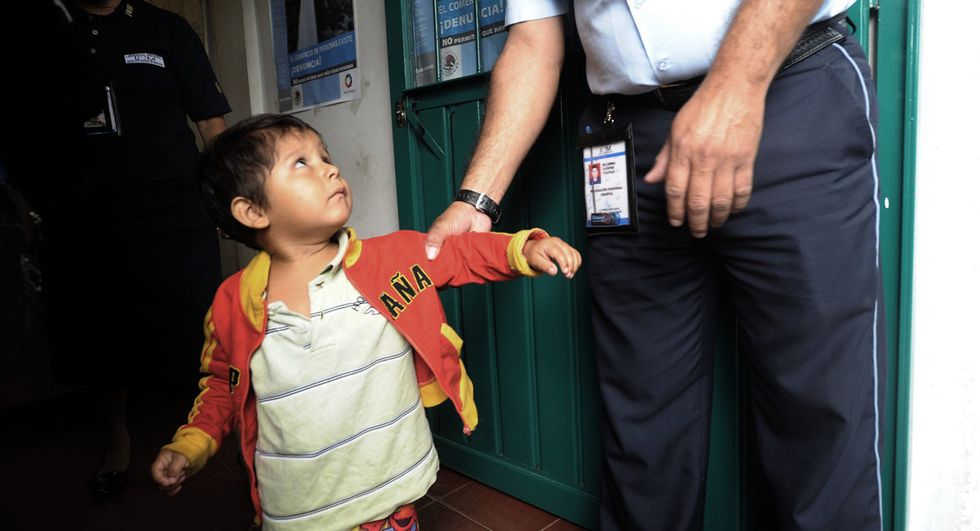 A Mexican immigration officer holds a child by his arm. Image via AFP.

In a new lawsuit, immigrant children detained at a government-funded facility in Texas described being forcibly drugged with psychotropic medicines that made them dizzy and unable to walk.

Reveal reported Wednesday that minors held at the Shiloh Treatment Center in Manvel, Texas — described in its Google+ listing as a "baby gulag" — were physically abused and given shots of  "powerful" psychiatric medications that "rendered them unable to walk, afraid of people and wanting to sleep constantly."

In the affidavits, the children and their parents said workers at the facility told them they would not be allowed to leave or see their parents if they didn't take the medicine, which was administered via shots. The children were allegedly told the shots were "vitamins."

“The supervisor told me I was going to get a medication injection to calm me down,” one girl said. “Two staff grabbed me, and the doctor gave me the injection despite my objection and left me there on the bed.”

According to one mother, her child "fell repeatedly, hitting her head, and ended up in a wheelchair." Another "described trying to open a window and being hurled against a door by a Shiloh supervisor, who then choked her until she fainted."

"One child was prescribed 10 different shots and pills including the antipsychotic drugs Latuda, Geodon and Olanzapine, the Parkinson’s medication Benztropin, the seizure medications Clonazepam and Divalproex, the nerve pain medication and antidepressant Duloxetine, and the cognition enhancer Guanfacine," the report noted.

Hundreds of pages of medical records were filed in the U.S. District Court in California in April. They were filed as part of an ongoing class action lawsuit against the government that alleges mistreatment of immigrant children in U.S. custody.

Forensic psychiatrist Mark. J. Mills assessed the records at Reveal's requests, and found that Shiloh orderlies were given an "unusually wide berth" with dosage recommendations for the children in their care.

Maribel Hernandez, a Honduran asylum-seeker whose son was held at Shiloh after being referred for "psychological issues" at another facility, told Reveal her case worker sent her a video of the boy in which he appeared "completely hypnotized and lethargic." She said she repeatedly objected to the medication, and never signed consent forms.

Shiloh received $19 million in federal funding after repeated allegations of abuse at the facility. In 2014, the Reveal report noted, Rep. Sheila Jackson Lee (D-TX) called for it to be shut down after a Houston Chronicle investigation revealed allegations of "physical violence, unreasonable and excessive use of physical restraints, administering emergency medications without notice to governmental authorities, and several deaths of minor children while in custody."