Ivanka lied: Donald Trump is the most anti-LGBT president in history 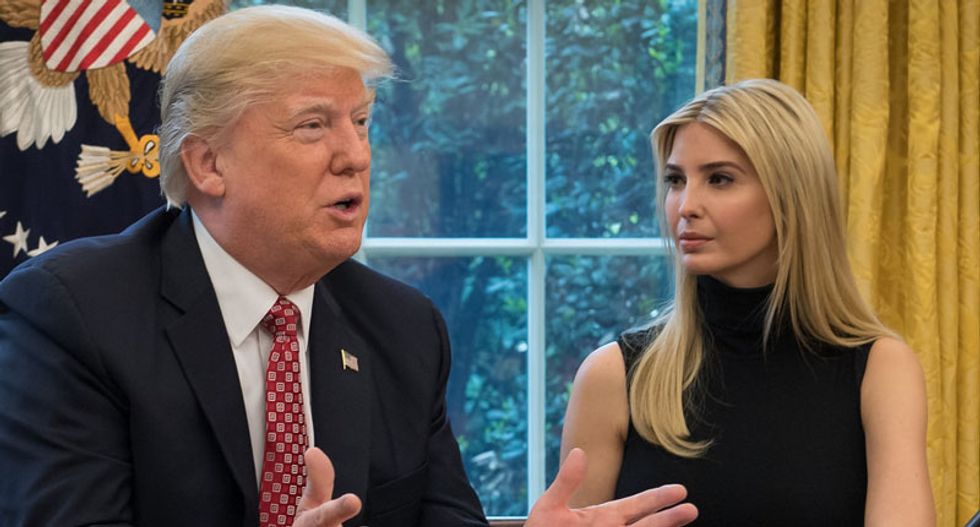 "I will fight for you," then-candidate Donald Trump infamously promised the LGBT community during the 2016 election.

When a reporter, a lesbian, asked candidate Trump if LGBT people can "look for more forward motion on equality for gays and lesbians," he responded, "Well, you can," and promised "to bring people together."

And after the Pulse nightclub massacre in Orlando, Trump even proclaimed that "who we are as a nation," our "heart and soul," is being pro-LGBT.

Those were just words – which all turned out to be lies. There were more. But Trump's actions have been far, far worse and far more damaging than many ever imagined.

President Trump also instituted an extraordinary policy reversal, prioritizing the rights of people of faith over the rights of LGBT people.

Those are just a few. There are countless other ways President Trump has actively or passively been the most anti-LGBT president in history.

He rejected a rule proposed by the Obama administration requiring "that same-sex spouses are recognized and afforded equal rights in certain Medicare and Medicaid-participating facilities." He has placed a virulently anti-LGBT justice on the U.S. Supreme Court, and flooded the federal courts with equally (or worse) anti-LGBT judges. One Trump nominee for a lifetime position as a U.S. District Court judge proudly admitted he discriminates against gay people, because they're gay.

Trump has endorsed several of the most anti-LGBT candidates modern America has ever known.

In October of 2017 a reporter told President Trump that Alabama Republican Roy Moore, who ultimately lost his Senate bid despite Trump's endorsement, "has said that homosexuality should be illegal and Muslims should be barred from serving in the U.S. Congress." The President refused to denounce those positions. Instead, he told the reporter that the people of Alabama "like Roy."

Trump's administration has argued in court against LGBT rights. And reversed Obama-era DOJ positions and policies that protected and supported LGBT people.

Despite claims from his more moderate supporters who try to market him as the most LGBT-supportive Republican to enter the White House, President Trump in fact does not support same-sex marriage, nor the right of transgender people to use restroom that correspond with their gender identity. But those positions, as offensive and antagonistic as they are, pale in comparison to this president's actions targeting LGBT people of all ages.

Under Trump, the Dept. of Justice filed an amicus brief arguing that it is acceptable to discriminate against LGBT people in the workplace, stating that the Civil Rights Act of 1964 does not protect "homosexuals" from discrimination. (The appeals court did not agree with the Trump administration's position that anti-gay discrimination is not sex discrimination, ruling that it is.)

Let's not forget the Trump administration is supporting the religious right by submitting an amicus brief arguing in favor of anti-gay discrimination in a U.S. Supreme Court casedue to be decided on this month. That case will determine if people and businesses can actively discriminate against LGBT people and same-sex couples merely by claiming their religious beliefs require them to do so. In response, the Trump administration is actually, as one LGBT editor puts it, telling the Supreme Court "that anti-gay discrimination isn't as bad as racial discrimination."

There is so much more.

Trump's policy of refusing and deporting people coming to America to seek asylum is a direct assault on LGBT people, many of whom make the arduous trip from countries in Central America where gay, lesbian, bisexual, and especially transgender people are frequently victims of hate violence and murder just for being LGBT. Their governments do little to nothing to protect them.

Late last month a 33-year old transgender woman, Roxana Hernandez (also spelled "Roxsana"), who had been gang-raped, finally reached the U.S. after traveling for nearly two months from Honduras. She died in ICE custody after being locked up for five daysin what is commonly referred to as an "icebox" – named, surprisingly enough, not for the Immigration and Customs Enforcement agency, but because it is an intentionally cold or near-freezing room designed to punish immigrants caught by ICE and the Border Patrol.

"Trans people in my neighborhood are killed and chopped into pieces, then dumped inside potato bags," Hernandez had told Buzzfeed in April. "They kill trans people in Honduras. I'm scared of that."

Again, these are just a few of the examples of Trump and the Trump administration's decidedly antagonistic and offensively discriminatory use of the executive branch – and the judicial branch, via nominations – to literally harm LGBT people.

President Trump in fact has embraced Christian evangelicals and his presidency has been a gift for their enduring support.

Trump signed an executive order effectively instructing the IRS to ignore the six-decades old Johnson Amendment, which bans churches and other tax-exempt religious organizations from campaigning for and donating to candidates – effectively allowing them to become Super PACs. That will certainly help the anti-gay Christian Right support candidates who want to further marginalize LGBT people.

His State Dept., starting in May of 2017, began denying visas to the gay men attempting to flee Chechnya's government-sponsored concentration camps. The authoritarian ruler Ramzan Kadyro, closely tied to Russian President Vladimir Putin, allowed gay men to be kidnapped, tortured, and murdered in the camps, which he and the Russian government denied even existed.

He nominated now-former Kansas Governor Sam Brownback to become his U.S. Ambassador-at-Large for International Religious Freedom. Brownback, a right wing religious extremist, is tied tightly to anti-gay hate groups including the Family Research Council and the American Family Association. he also has ties to the secretive anti-LGBT organization known as "The Family," that helped promote Uganda's "Kill the Gays" bill.

As governor, Brownback actually revoked an executive order made years earlier by his predecessor which made it illegal to discriminate against LGBT state employees.

Despite, or because of, his record on LGBT issues, the GOP-led Senate confirmed Brownback's nomination.

(It should also be noted that Republican Senate Majority Leader Mitch McConnell also, just last month, appointed longtime anti-gay hate group leader Tony Perkins of the Family Research Council to a two-year term on a federal government commission tasked with investigating and reporting on international religious freedoms violations. Perkins will now sit on the United States Commission on International Religious Freedom, an independent body that has a history of advancing the agenda of America's Evangelical Christian movement.)

In October of last year, America learned that their president had "joked" that Vice President Mike Pence "want to hang" all gay people.

Candidate Donald Trump's choice of Pence to become his VP was not just a slap in the face to the LGBT community and allies, it was a harbinger of the attacks on the LGBT community to come. Pence, rightly, is viewed as even more anti-LGBT than Trump. While the U.S. President clearly has few strong personal beliefs, his Vice President has been described as a religious anti-gay "zealot" by those who know him.

Trump has encouraged Pence's religious beliefs to not just be accepted into the White House, but embraced in the Oval Office. Trump has literally prayed while sitting at the historic Resolute Desk with some of the most powerful professional anti-gay peddlers and hucksters of hate. 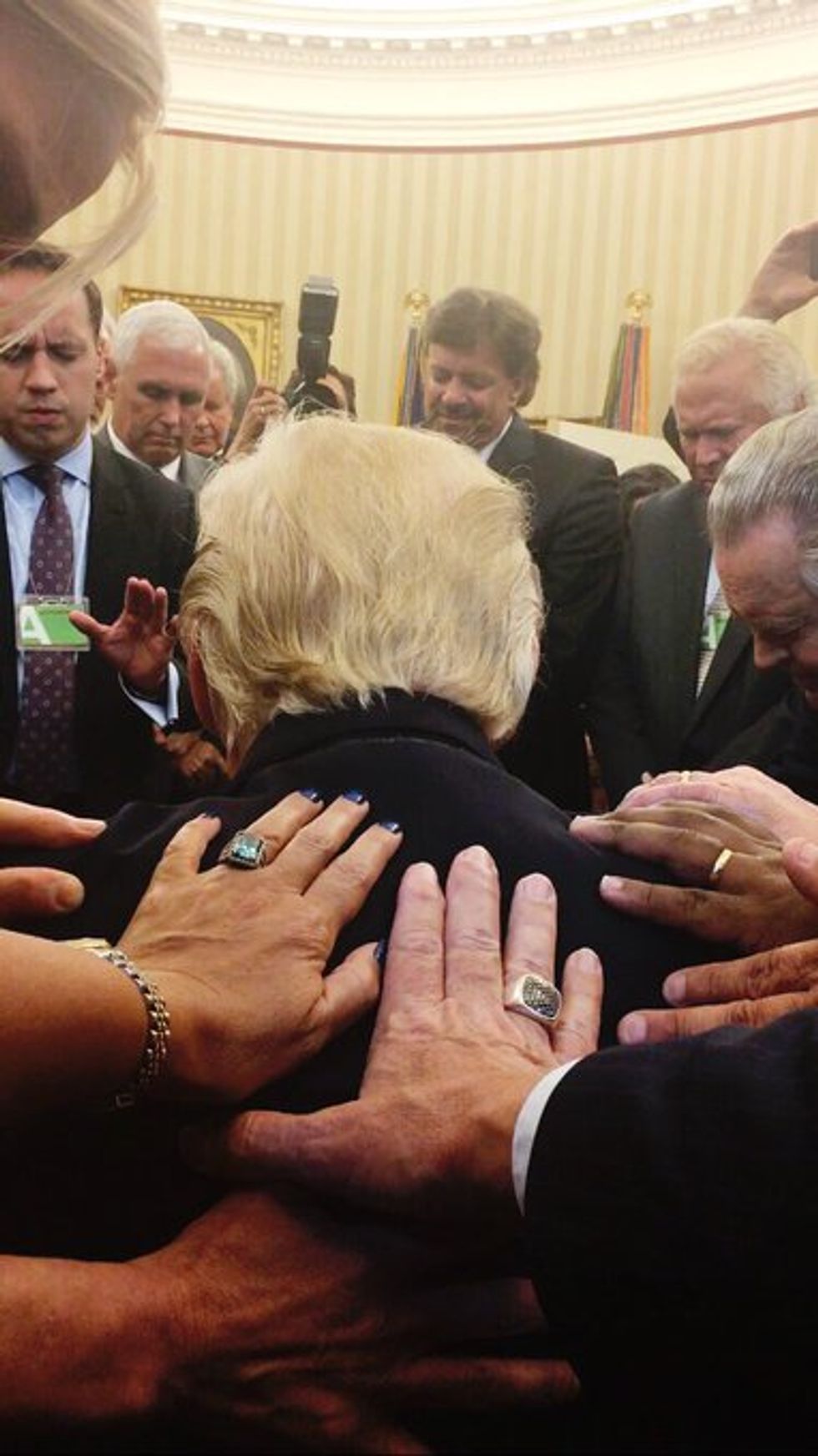 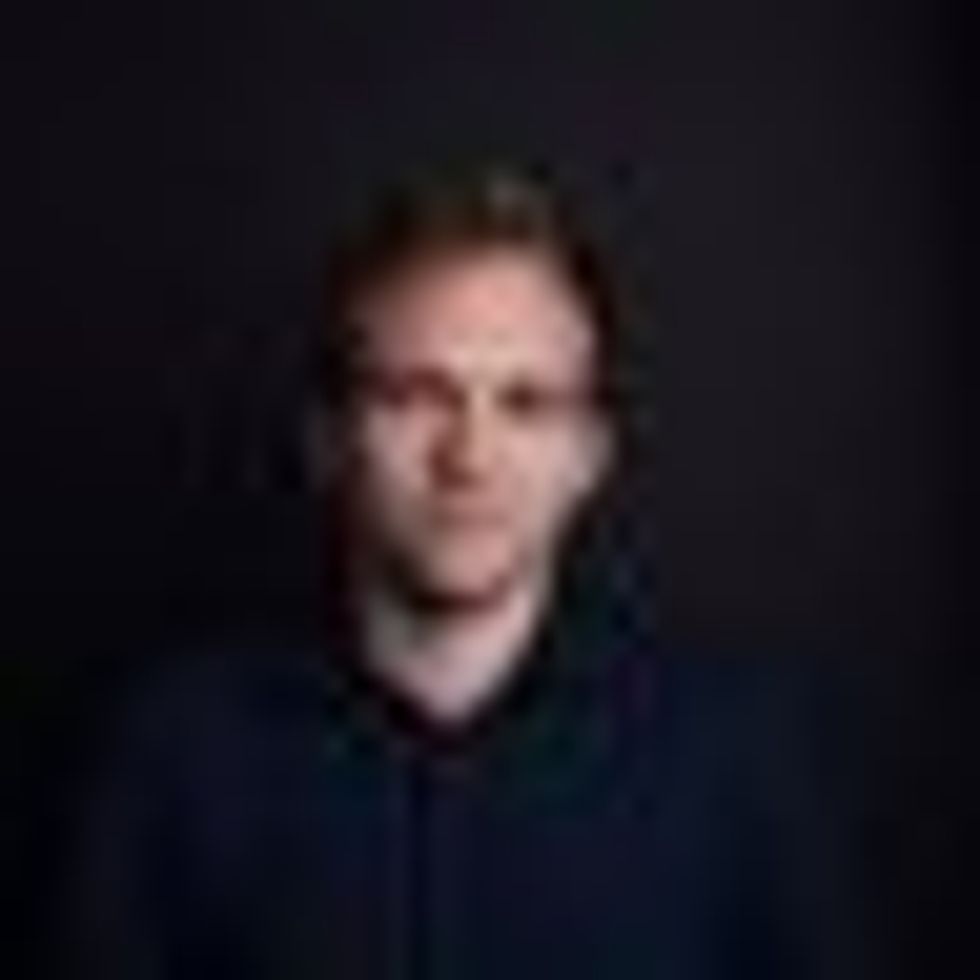 Such an honor to pray within the Oval Office for @POTUS & @VP . 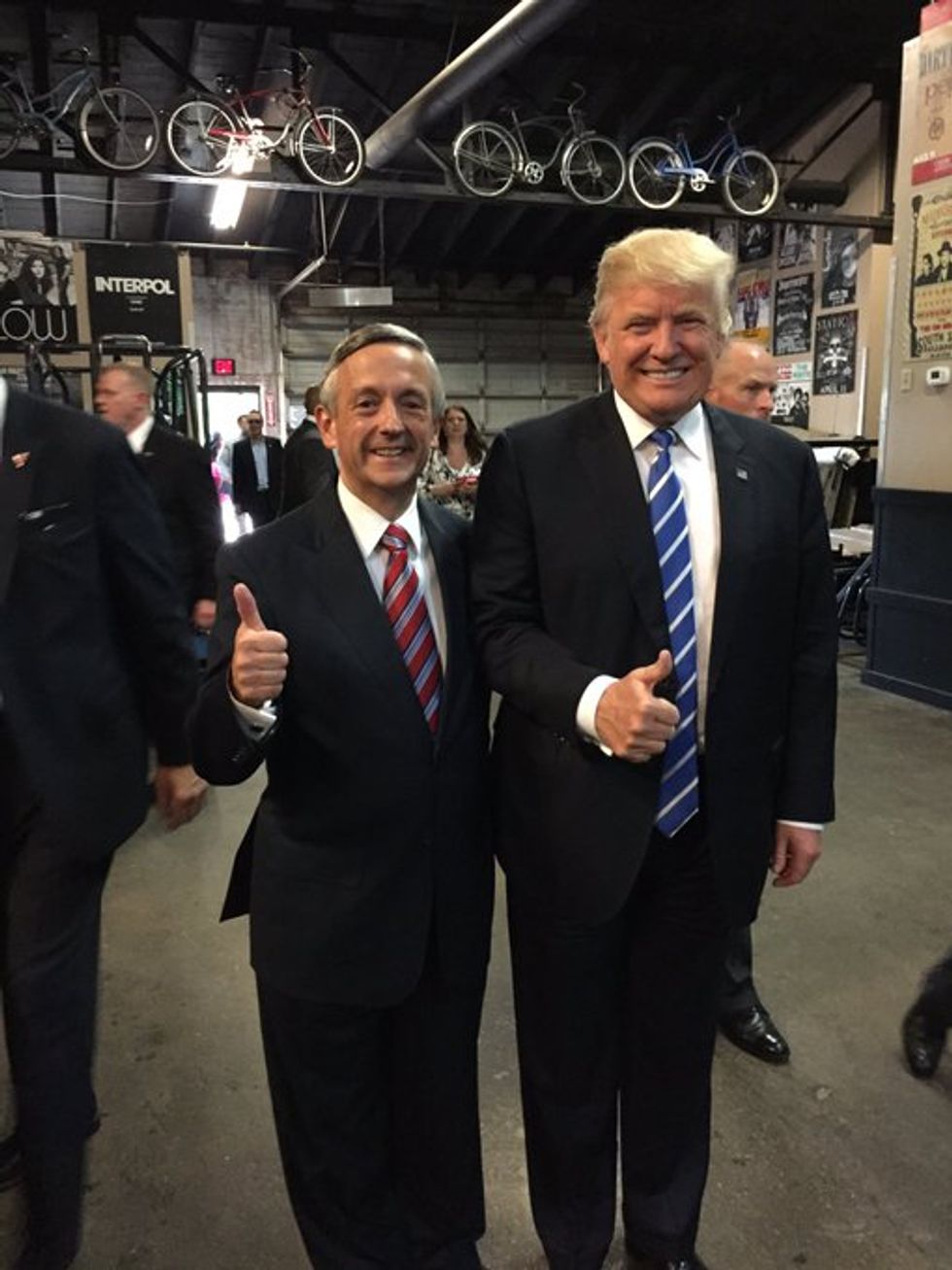 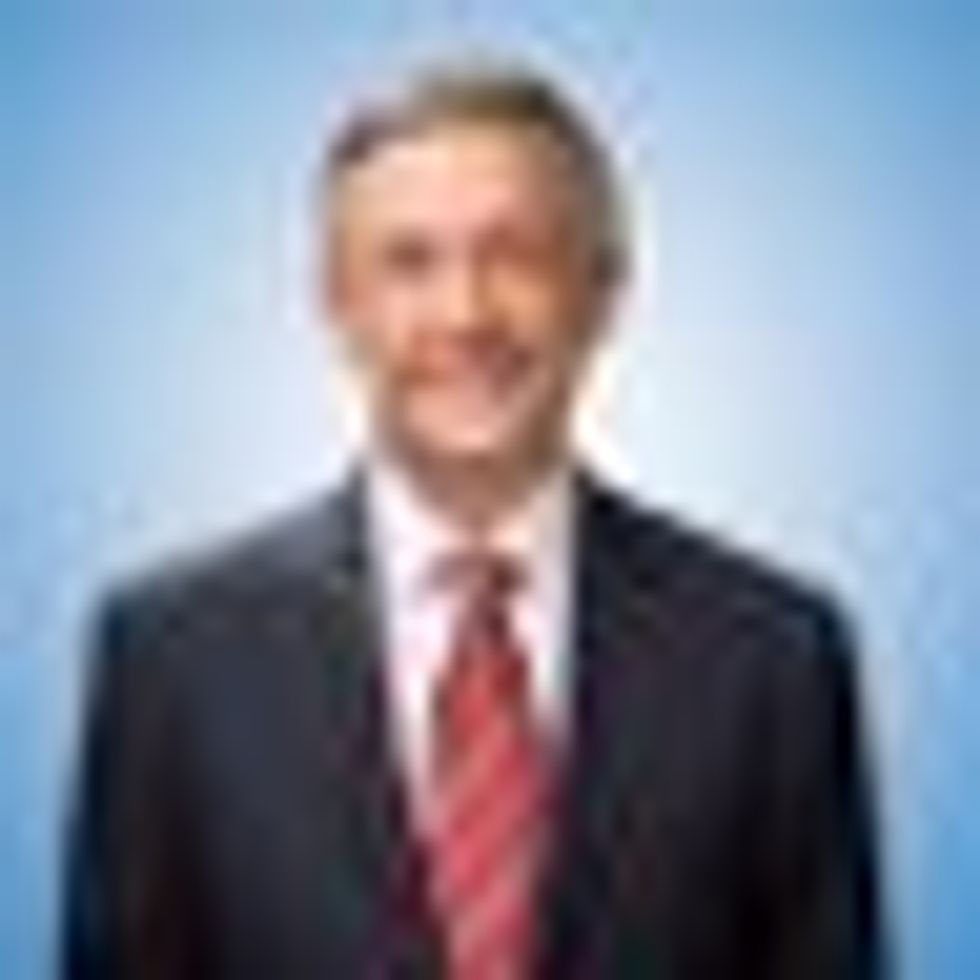 Last month Pastor Jeffress delivered a prayer at the opening ceremony of the new U.S. Embassy in Jerusalem. The White House has refused to comment on how that came to pass.

One of the attendees, Pastor Johnnie Moore, noted then the group had spent that entire July day in the White House. "We enjoy an open door," he said, "in the West Wing."