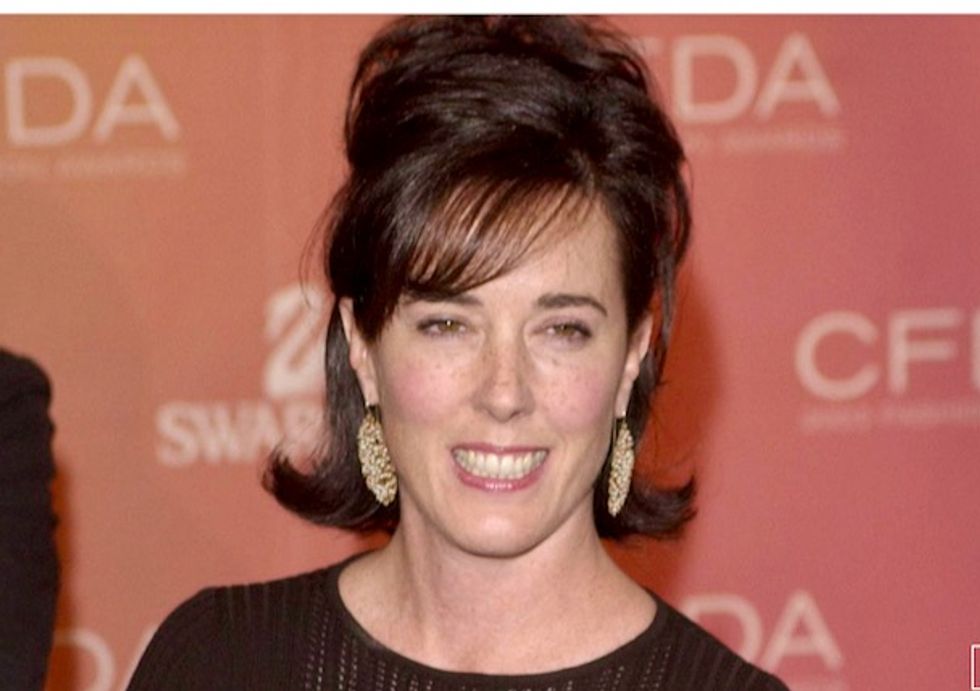 Designer Kate Spade, who committed suicide in New York, suffered for years from mental illness but had refused treatment, her sister said Wednesday.

The death of the 55-year-old star designer, whose body was found Wednesday in her Park Avenue apartment, "was not unexpected by me," Spade's older sister Reta Saffo told The Kansas City Star from her home in Santa Fe, New Mexico.

"Sometimes you simply cannot SAVE people from themselves!" Saffo wrote, adding that Spade was concerned hospitalization for treatment would hurt the light-hearted image of her eponymous brand.

"I'd flown out to Napa and NYC several times in the past 3-4 years to help her to get the treatment she needed (inpatient hospitalization)," Saffo added.

"She was always a very excitable little girl and I felt all the stress/pressure of her brand (KS) may have flipped the switch where she eventually became full-on manic depressive."

Spade -- a Missouri native who first worked as a journalist, including a stint as accessories editor at Mademoiselle magazine -- launched her Kate Spade fashion label in 1993 with her husband Andy and the help of outside investors.

Her cheerful use of bright colors and prints proved a hit with career women.

AFP / Bryan R. SmithMedia and onlookers gather outside the New York apartment of fashion designer Kate Spade after she was found dead at age 55 on June 5, 2018

Saffo said she had come "very" close to getting her sister into a treatment facility.

""She was all set to go -— but then chickened out by morning. I even said I (would) go with her and be a 'patient' too (she liked that idea) I said we could talk about it all -- our childhood, etc. That I could help her fill in any blanks she might have," Saffo added.

"That seemed to make her more comfortable, and we'd get sooo close to packing her bags, but -- in the end, the 'image' of her brand (happy-go-lucky Kate Spade) was more important for her to keep up. She was definitely worried about what people would say if they found out."

Saffo, who said Spade's husband also helped to try to get his wife into treatment, eventually stopped trying after "numerous" attempts.

"One of the last things she said to me was, 'Reta, I know you hate funerals and don't attend them, but for me would you PLEASE come to MINE, at least. Please!' I know she perhaps had a plan, but she insisted she did not," Saffo added.

Celebrity news website TMZ cited police sources as saying Spade had fallen into depression in recent weeks after her husband left her and was seeking divorce.

Grieving her sister's death, Saffo recalled "she was a dear little person. So dear -- so kind, so funny. I'll miss our 6-7-hr-long phone conversations between NY and NM.

Anna Wintour, the grand priestess of fashion and editor-in-chief of Vogue magazine, hailed Spade as a woman who "defined" authenticity.

"There was a moment when you couldn't walk a block in New York without seeing one of her bags, which were just like her; colorful and unpretentious," Wintour said in a statement.

"Kate designed with great charm and humor, and built a global empire that reflected exactly who she was and how she lived. Long before we talked about 'authenticity,' she defined it."

Several admirers like First Daughter Ivanka Trump highlighted the importance of suicide helplines and seeing the signs of depression.

"Kate Spade's tragic passing is a painful reminder that we never truly know another's pain or the burden they carry. If you are struggling with depression and contemplating suicide, please, please seek help," Trump tweeted.