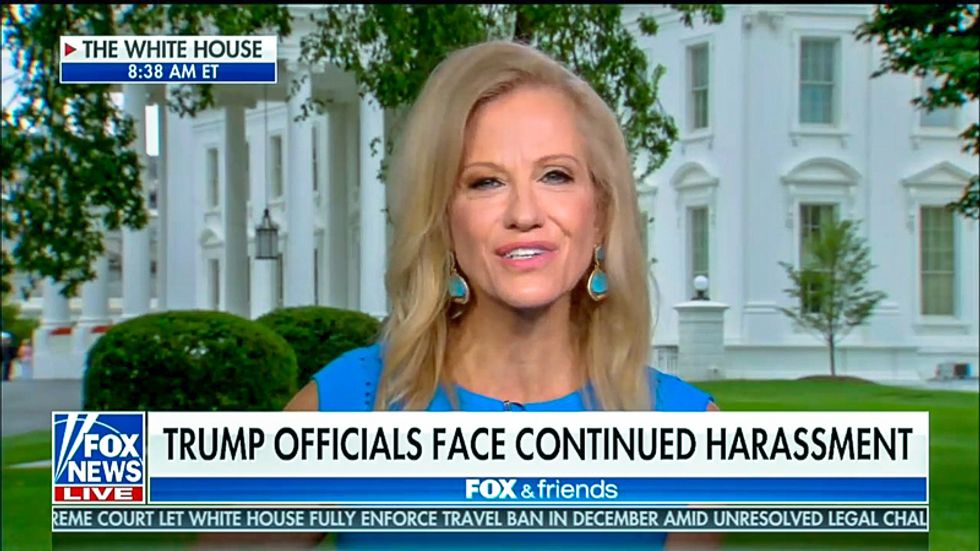 White House counselor Kellyanne Conway on Wednesday became the latest official to call for civility in politics -- and she insisted that it is not fair to compare President Donald Trump's rhetoric to that of liberals.

"It's really hitting a fever pitch," Earhardt said. "And now we learn this morning that Sarah Sanders is going to get Secret Service protection at her house."

"There's a difference between rhetoric and the social media muscle and cable news cojones that some people have and crimes," Conway replied. "People are inciting or asking for crimes or violence."

Conway noted that actor Peter Fonda recently had to apologize after tweeting that he would like see Sanders' children kidnapped and put in "a cage with pedophiles."

"This is not insulting or all the stuff we're used to around here," she continued. "Insulting what somebody said or how they looked or where they work or what they wear. This is calling for something much deeper."

Conway asserted that media executives should pay "very close attention to what's being said by some of their commentators and some of their writers, people who are print reporters now, have cable news contracts are obviously on social media all day."

"They get away with saying things there that you would not be able to get past and editor's desk," the president's counselor complained.

Conway pointed to a congressional intern who was suspended after cursing at Trump.

After divulging the intern's name, Conway claimed that the suspended staffer was being "deified on the left, the socialist left."

"I talked to the president this morning -- he says hello -- I can promise you on his behalf, that if a White House intern here this summer ever said anything like that so an elected official, let alone the president of the United States -- the F-word followed by the name... I guarantee you that person would be gone," Conway remarked. "And so we're not even sending the right message by having the punishments fit the, not just rhetoric."

Conway concluded by insisting that there "is no moral equivalence" between Trump calling for violence at campaign rallies and liberals -- like Rep. Waters -- who use violent imagery to protest Trump.

The Pentagon, meanwhile, just got more money than it knows what to do with.

According to a report from Politico, "Hillbilly Elegy" author J.D. Vance's attempt to win the GOP nomination for an open U.S. Senate seat representing Ohio is running into major headwinds due to his previous attacks on Donald Trump.

Vance is battling former state Treasurer Josh Mandel for the nomination and the two have been trying to one-up each other with Trumpian-like comments in an effort to court the former president's hardcore base.