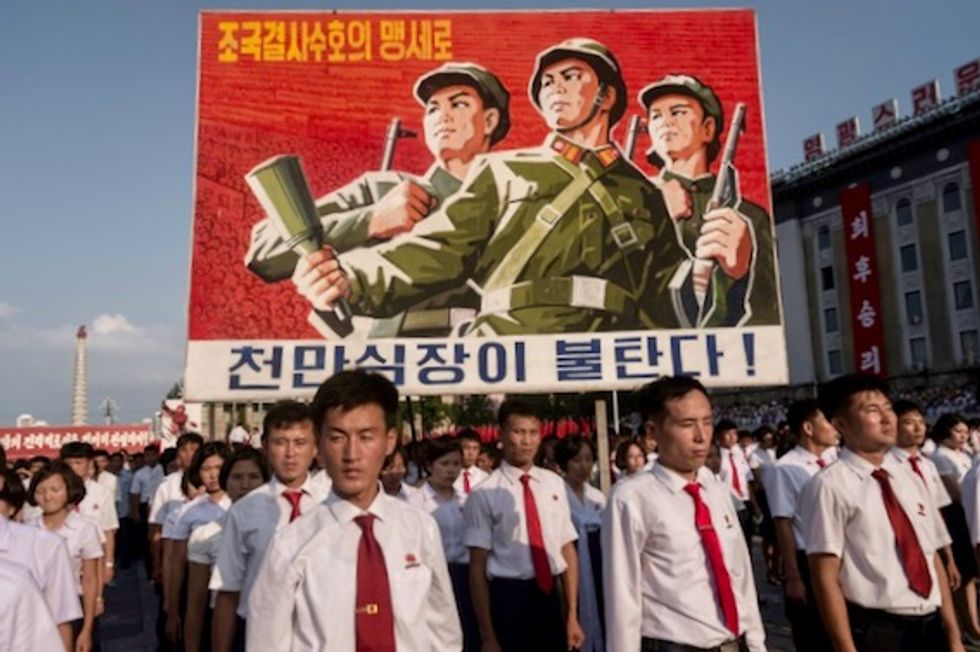 Less than a year ago, Pyongyang hosted this rally in support of North Korea's stance against the US AFP/File / KIM Won-Jin

The two Koreas Monday marked their war anniversary in a mood of detente, with Pyongyang dropping its customary anti-US rhetoric and Seoul saying talks have begun on moving the North's artillery back from the tense border.

Pyongyang's tightly controlled official media are normally packed with anti-American invective on June 25, when the North launched a mass invasion of the South in 1950.

But this year proved to be a marked exception in the wake of the historic Singapore summit.

In the South, Prime Minister Lee Nak-yon said discussions were taking place about relocating Pyongyang's long-range artillery away from their border.

North Korea is estimated to have around 1,000 artillery pieces along the frontier, threatening much of the South's capital Seoul only 50 kilometres (30 miles) away.

The North has long accused the US of provoking the 1950-53 Korean War as part of a plan for global domination and blames it for the division of the peninsula, agreed between Moscow and Washington in the closing days of World War II.

A US-led 16-country United Nations force supported the South in the conflict while China backed the North.

"Every year on this day, our army and people row the boat of memories, full of creed and determination to defend the nation," read a report in the North's state-run Rodong Sinmun.

"What surprised the world even more was... our people's solidarity to annihilate the enemy," it added -- without identifying the enemy by name in any of its coverage.

In stark contrast, all six pages of the newspaper last year were filled with colourful criticisms of the "US imperialists", blaming Americans for "a holocaust in which they massacred countless Koreans in the most brutal and barbarous way".

More virulent forms of anti-US propaganda have been disappearing from the streets of Pyongyang, while images of missile launches and military formations on a prominent site outside the city train station have been replaced with visuals of industry and agriculture.

Analysts say the rare omission of the US in North Korean media coverage of the anniversary may be part of the regime's efforts to maintain the current diplomatic momentum.

"It's remarkable," said Peter Ward, a North Korea researcher at Seoul National University. "On this day of all days it's nowhere to be found."

"North Korean anti-Americanism may have popular roots (nourished by decades of agitprop), but what we see is what the state wants us to," he added.

Across the border at a war anniversary ceremony in Seoul, Prime Minister Lee acknowledged that the conflict began "due to North Korea's invasion".

But Lee noted the diplomatic rapprochement on the peninsula, with two inter-Korean summits preceding the meeting in Singapore -- after which Trump announced the suspension of joint military exercises with the South, the US's security ally.

In Singapore Kim and Trump signed a joint statement in which Pyongyang committed to "work toward complete denuclearisation of the Korean Peninsula".

But critics have said the encounter between the two mercurial leaders was more style than substance, producing a document short on details about the key issue of the North's atomic weapons.