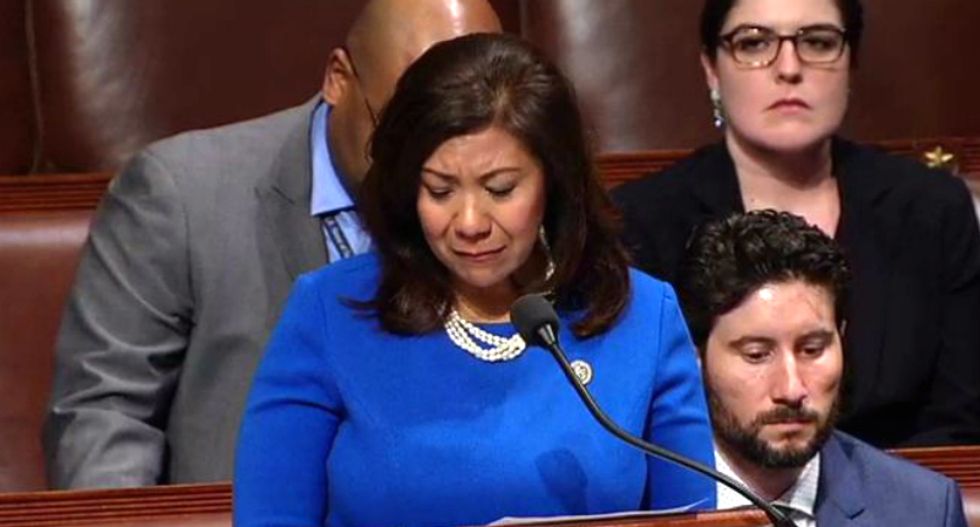 Rep. Norma Torres (D-CA) gets emotional during an impassioned speech on the House floor. Image via screengrab.

Though President Donald Trump vowed to keep families together in an order reversing his controversial family separation policy yesterday, the Congressional fix he and the GOP are pushing is considered by many Democrats to be much worse.

House Referendum 4760, sponsored by Rep. Bob Goodlatte (R-VA) and named the "Securing America's Future Act," includes language that an analyst described as "a laundry list of enforcement provisions that [White House Senior Policy Adviser] Stephen Miller puts under his pillow each night." The bill would, among other provisions, criminalize all undocumented immigrants, make protections for asylum-seekers nil and authorize $25 billion for Trump's border wall.

The "Securing America's Future Act" is one of the bills the GOP is offering up in exchange for the end of the family separation policy. In protest of it, Rep. Norma Torres (D-CA) — herself a Guatemalan immigrant who crossed the US-Mexico border as a child before becoming a naturalized citizen — gave a moving speech on the House floor about her experiences and the way they relate to the conservative bill.

"In 1970, a Guatemalan couple decided to send their daughter to the US," the California congresswoman said, her voice already breaking with emotion. "That young girl was me. I was welcomed here in a loving home. I was not put in a freezing cell."

"My parents had no choice," she continued. "My mother died a couple of years later. These parents are making a choice that frankly I could not make today for my children."

"A few months ago, I was away from home for so long, for four weeks, that my grandson, a 3-year-old, felt he had to reintroduce himself to me because he had not seen me for four weeks," Torres continued. "He didn't think that I would remember him. Imagine an infant, when that infant is returned to their parent, they will be introduced to a total stranger."

"I urge my colleagues to oppose this rule and this cruel legislation," she implored, "and let's help those who can't help themselves in these very corrupt countries of the northern triangle. They are not s-holes, as the president has referred to them. Let's give them an opportunity to live another day."