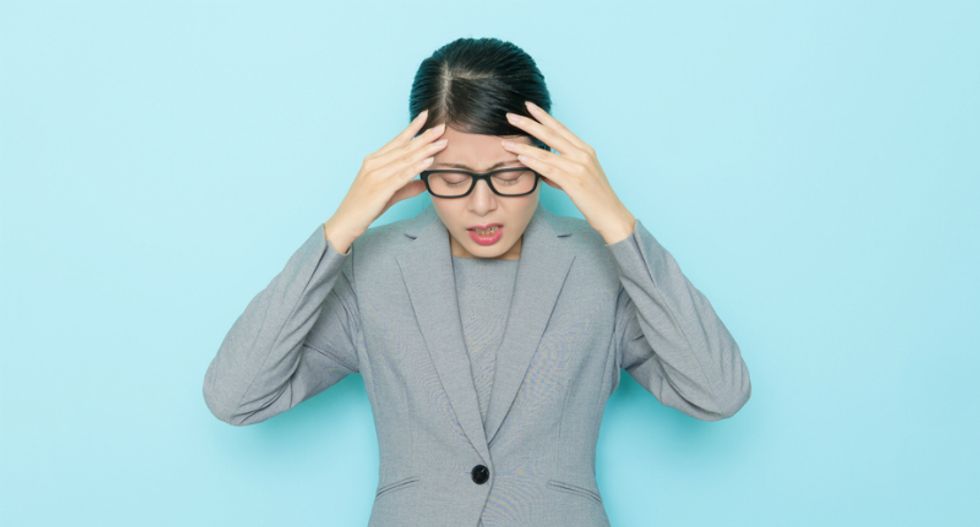 A professional woman holds her head in her hands. Image via Shutterstock.

While cross-examining a woman raped by her father, a defense attorney asked the incest victim why she didn't clench her legs to prevent the assault.

The Canadian Broadcasting Company reported that Calgary lawyer Krysia Przepiorka's comments earned her admonishment from the judge presiding over the case.

"You would agree with me then," the attorney told the victim on Monday, "all you had to do was clench your legs together and your pants would have been unable to move."

Court of Queen's Bench Justice Gillian Marriot ultimately found the line of questioning to be "founded on rape myths."

On Tuesday, Przepiorka filed for a mistrial after claiming Judge Marriot "inappropriately entered the fray and improperly limited cross-examination." The attorney claimed the questions were permissible because she was attempting to establish the witness' credibility and prove the timing of the alleged incest was "impossible."

"Przepiorka's question is eerily similar to the comments made by controversial former judge Robin Camp," the CBC reported, "who asked why a woman didn't keep her knees together to prevent an alleged rape, during a 2014 sexual assault trial."

Camp resigned after the Canadian Judicial Council recommended his removal from the bench — "but not before fighting to keep his job and trying to have the council ruling overturned."

He has recently been reinstated into the Law Society of Alberta, but must apply to preside once again over any cases.