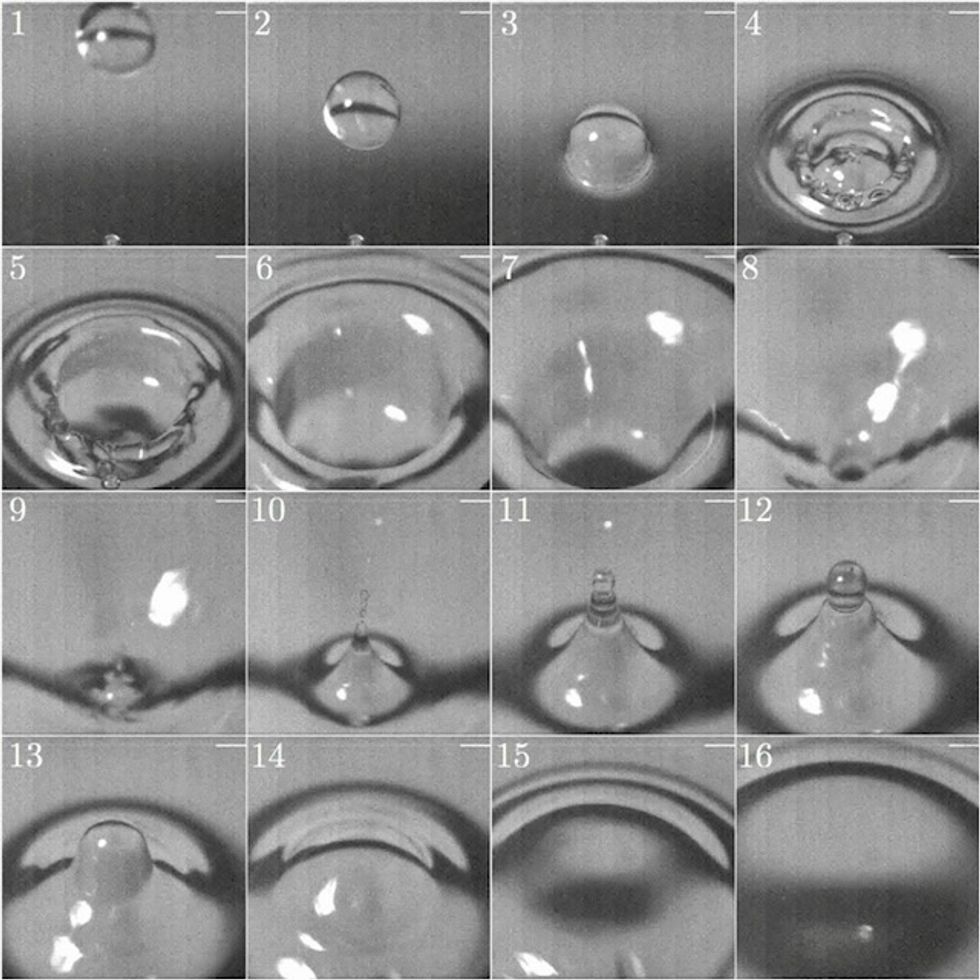 Scientists said Friday that they had finally cracked the "dripping tap" enigma and know exactly how the sound is generated.

In 1908, Arthur Mason Worthington published a treatise, "A Study of Splashes", featuring the first known photograph in a scientific journal of a drop as it punctures a body of water's still surface.

The image clearly shows the formation of a cavity -- like a thimble turned upside down -- on the water's surface upon impact, followed by a narrow column of water rising as the cavity recoils.

But if the fluid mechanics of drops-in-liquid have been understood for a century, the signature noise they make remained harder to grasp.

Around 1920, a team of researchers in England decided that resonance inside the tiny water cavity was the likely mechanism behind the sound.

A decade later, another group discovered that a minimum height was required to generate a "plink."

Finally, in 1955, scientists noticed the formation of a tiny bubble of air briefly trapped beneath the cavity as it took shape, speculating that when it burst sound waves rose to the surface and escaped into the air.

Over the following decades, dozens of published experiments with increasingly precise instruments backed up this idea.

AFP / FRANCK FIFEIf the fluid mechanics of drops-in-liquid have been understood for a century, the signature noise they make remained harder to grasp

"Until now, everyone thought these sound waves just passed through the water surface and that's how we heard the sound, much like if you hear someone speaking through a wall," said Samuel Phillips, an undergraduate student at the University of Cambridge and lead author of a study in Scientific Reports.

The idea to probe further came to Phillips' professor, Anurag Agarwal, while he was visiting a friend who had a small leak in the roof of his house.

"I was being kept awake by the sound of water falling in a bucket," he recalled.

"The next day I discussed it with my friend and another visiting academic and we were all surprised that no one had actually answered the question of what causes the sound."

To find out, the researchers set up an experiment making full use of cutting-edge video and audio recording technology.

Using ultra-slow-motion video, a microphone and a hydrophone, they were able to perceive details that had previously gone unnoticed.

The trapped air bubble, it turned out, began to vibrate as the cavity deepened.

"Sound waves emitted by the vibrating air bubble don't simply pass through the water surface into the air, as previously thought," Phillips explained.

"Rather, the oscillating bubble causes the water surface itself to vibrate at the bottom of the cavity, acting like a piston to drive sound waves into the air."

Not only did the researched crack the enigma, they also found a way to neutralise the "plink" for those leaky-roof rainy days.

Adding a little dish-soap will do the trick, they said.

"It changes the surface tension of the water, and so prevents the bubble from being trapped under the water," Phillips said.

"No bubble means no sound, hence no 'plink'!"