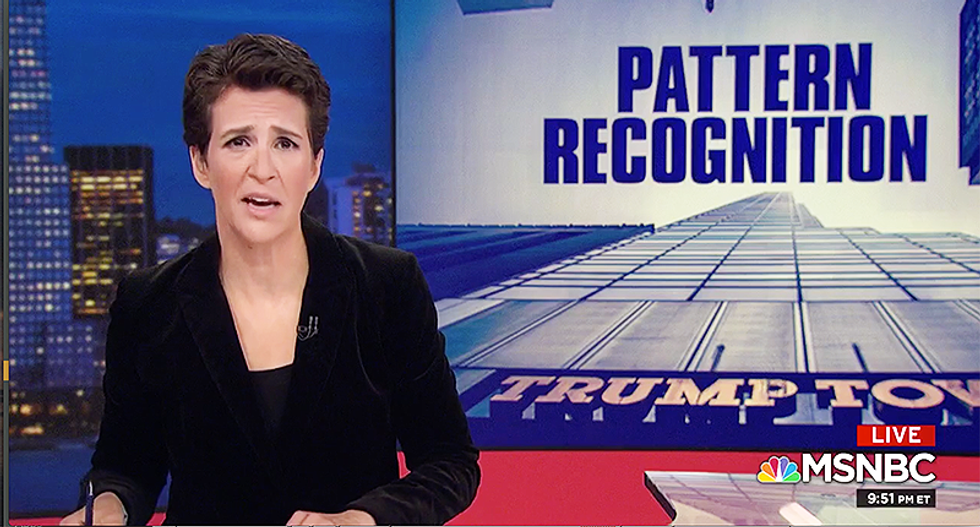 Nestled in a New York Times report about President Donald Trump's billionaire buddy Tom Barrack and his close ties to leaders in the Middle East, is a nugget of information that MSNBC host Rachel Maddow latched onto Wednesday evening.

The report on Barrack details the ways in which he liaised with former campaign manager Paul Manafort and those leaders.

Maddow cited the first report of an indication of the investigation, which detailed a "previously unknown meeting that happened in Trump Tower in August 2016 ahead of the election. In that meeting Donald Trump Jr. reportedly met with somebody who's now a cooperating witness in the special counsel investigation, someone who's been granted immunity reportedly for his cooperation."

George Nader told Don Jr. that the Saudis and UAE were eager to help his father win the 2016 election. Nader was then "quickly embraced as a close ally by Trump campaign advisors," Maddow explained.

Wednesday, Maddow said that the second major indication of possible involvement by the Saudis and UAE in the election came from the revelation that Barrack was "the bridge between Trump and the crown princes of Saudi Arabia and the United Arab Emirates." The report cited people familiar with the matter.

"Manafort has since been indicted by the special prosecutor investigating Russian meddling in the presidential election," The Times reporter David Kirkpatrick wrote. "The same inquiry is examining whether the Emiratis and Saudis helped sway the election in Mr. Trump’s favor — potentially in coordination with the Russians, according to people familiar with the matter. Investigators have also asked witnesses about specific contributions and expenses related to the inauguration, according to people familiar with those interviews."

"Really?" she asked, rhetorically. "Not just Russia but Russia and the UAE and Saudi Arabia potentially working together to do that."

Maddow asked Kirkpatrick if he knew that special counsel Robert Mueller had turned his investigation to look at other countries and their potential involvement in the 2016 election. Specifically, Mueller is reportedly looking at the United Arab Emirates and Saudi Arabia.

Kirkpatrick explained that the Nader information comes from the emails exposing a secret Jan. 2017 meeting on the Seychelles islands between Blackwater founder Erik Prince and Russian oligarch Kirill Dmitriev. The secret meeting was aimed to create a communications channel between the White House and the Kremlin. Prince then lied about it when questioned by Congress.

"I think we know for sure that that meeting has caught the interest of the special prosecutor and that they're asking questions about Nader, about Nader's connections with Russia, about efforts by the UAE and possibly Saudi Arabia to try to help the Trump campaign and whether or not there was some communication there," Kirkpatrick told Maddow.

All of those findings have nothing to do with Tom Barrack, however, The Times reporter explained.

"He enters the picture earlier trying to build a bridge as you say between the Trump campaign and the Arab leaders," he continued. "When we were doing the Nader reporting, I wondered how is it the UAE and Saudi Arabia can feel so positive about Trump that they would send this emissary to the Trump campaign to offer their help. Some of that becomes clear when you look at the communications that Tom Barrack had with the ambassador."

He went on to say that Trump never met with the Arab leaders, but that Barrack did all of the legwork to bring the two together and build the relationships between the two.

"There's an interesting part of this where Tom Barrack tries to set up a meeting between Paul Manafort and then the deputy crown prince of Saudi Arabia, Mohammed bin Salman," Kirkpatrick said. "It was discussed between Yousef Al Otaiba, the Emirati ambassador, and Tom Barrack as a prelude bringing MBS (as he's known) together with the candidate. It's a rather advanced effort to try to hook up the campaign with Saudi Arabia and specifically with MBS at a time he wasn't yet the successor to the thrown. When he was still making his move."

He said the meeting never happened but from the emails it sounded as if Manafort was close, saying things like "let's do it Friday, to avoid the press."

"Even though the meeting didn't happen, the work that Tom Barrack did to sell the campaign on the Saudis and the Saudis on the campaign, had some benefit," he said. "We saw them change the Republican Party platform to help the Saudis. And we saw them saying 'Look we're moderating this policy on a Muslim ban, don't worry it's not as bad as it seems.'"

Watch the full explanation and interview below:

Kyiv (Ukraine) (AFP) - The EU on Friday joined the G7 in agreeing a cap on the price of Russian oil to starve the Kremlin of resources for its Ukraine war, as Vladimir Putin said strikes on Ukraine's infrastructure were "inevitable".

The price cap of $60 per barrel, previously agreed on a political level with the United States and the G7 group of wealthy democracies, will come into effect with an EU embargo on Russian crude oil from Monday.