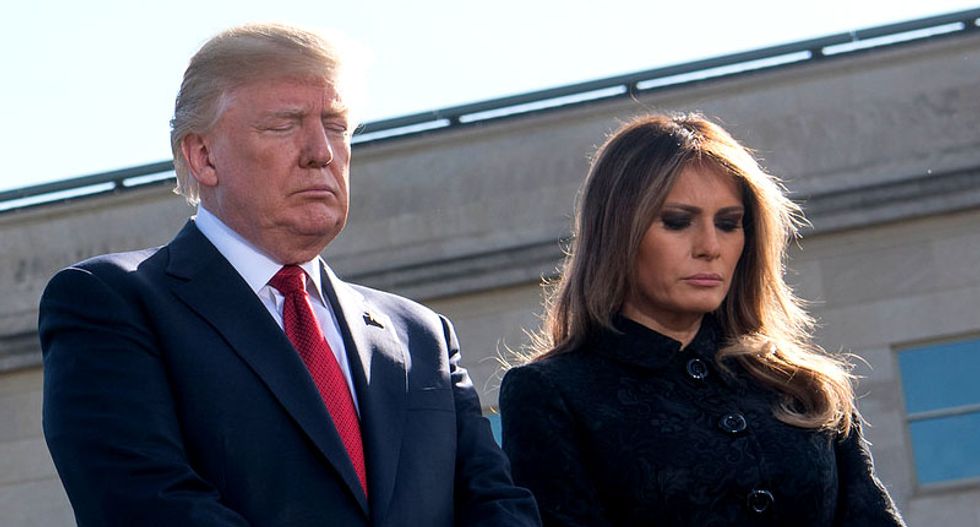 President Donald Trump and First Lady Melania Trump reflect during a moment of silence at the 9/11 Observance Ceremony at the Pentagon in Washington, D.C., Sept. 11, 2017. (DOD photo by Navy Petty Officer 1st Class Dominique A. Pineiro)

The White House says that First Lady Melania Trump will make her first appearance in nearly a month on Monday night, CNN reports.

The president's third wife has not been seen since going to the hospital for surgery on May 10.

Despite claiming that she is well, Melania did not attend a Trump family getaway this weekend at the president's Camp David retreat, which everyone else in the Trump clan made it out to—even little-seen daughter Tiffany.

I see the media is working overtime speculating where I am & what I'm doing. Rest assured, I'm here at the @WhiteHouse w my family, feeling great, & working hard on behalf of children & the American people!" Melania Trump allegedly wrote.

Monday's event will be closed to the press, which immediately made some suspicious about her alleged attendance.

The one event the White House alleges Melania will be attending will be closed off to the press https://t.co/YrZESNvdft
— Sarah Kendzior (@Sarah Kendzior) 1528077447.0