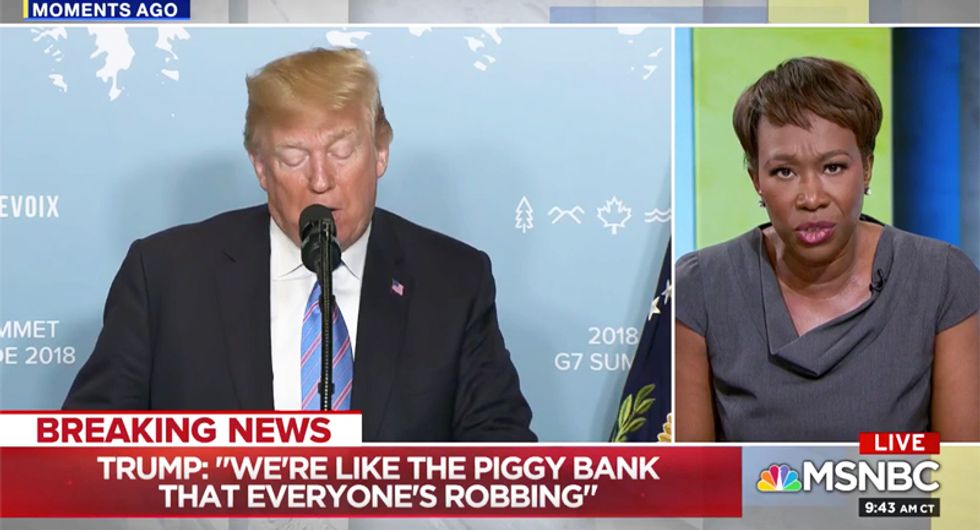 Following President Donald Trump's rambling address and abrasive question and answer back and forth with the press at the G7 summit, panelists on MSNBC's AM Joy admitted they were stunned and almost needed to pick their jaws up off the floor.

With host Joy Reid admitting, 'We were saying maybe we should have a camera in on our faces as we were sort of reacting," to Trump's address, her panel weighed in with a shell-shocked looking John Harwood admitting he was stunned by how Trump looked and spoke.

"I'll be honest, as a citizen I'm concerned about the president's state of mind," Harwood stated. "He did not look well to me in that press conference. He was not speaking logically or rationally. I don't think many of those things he said are true, and there's about something his affect which was oddly kind of languid from him."

"I don't know what it means, but he did not look well to me," the MSNBC correspondent added added.

Well, john has hit the nail on the head," Nance agreed. "I think [GOP strategist] Steve Schmidt said this the other day, that Donald Trump comes off as a moron. I think he came off like an idiot today. I was almost shocked at the way that he spoke with utter contempt of every president that preceded him. He does not fundamentally appear to believe in the processes and systems that put him in the office. he doesn't appear to believe in the alliances that bind us together, that make us stronger as a nation."

"It is all about his narcissism," he excitedly added. "And the view from a national security perspective, this man wouldn't qualify for the nuclear weapons control system, to allow him to be anywhere near the nuclear control -- the nuclear control keys or even guarding them? I mean, I'm really shocked at the way that he speaks because it is all Donald Trump-centric. He came off like Mad King Donald,  not president of the United States."