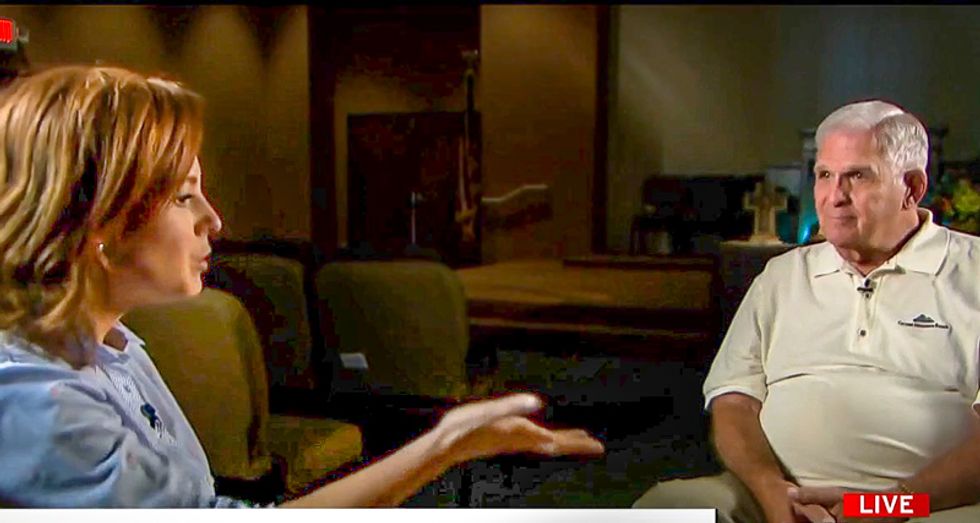 During a report on MSNBC's Morning Joe, Ruhle noted that "for the most part" evangelicals "stand with the president because they believe his ideology supports their overall values."

"Blind faith is how you have to trust the Lord," pastor Bill Sutton of Trinity Baptist in McAllen, Texas told Ruhle.

"But the Lord and elected officials are two different things," Ruhle observed.

"But they are ministers of God for the righteous," the pastor replied. "I don't believe any person is in any office that God has not allowed it to be there."

Sutton insisted that he does "care about these kids."

"I've kind of put my trust somewhere," he explained. "I can't solve it and so I'm trying to believe that the government will do that which is right because they are ministers of God for righteousness sake."

North Carolina Pastor Mike Jones questioned whether the images of children in detention centers were real.

"I don't believe it," he told Ruhle. "I think it's all a big lie. Like I said, I don't think that's happening. I don't think that the people who are so-called being separated are what the news is portraying them to be."

Another North Carolina evangelical pastor, Mike Purdue, blamed the parents who are being separated from their children.

"It's the parents, the parents who bring their children to the border to violate the law," Purdue opined.

Ruhle later told MSNBC's Willie Geist that she brought up Trump's history of immorality with one of the pastors.

"And he stopped me and said, 'But in the end, God wanted him to be president and it's God's will and we have to give the president a pass," she revealed. "And he felt like many others -- you don't criticize God, you shouldn't criticize our leaders. So for someone like me, sitting across [from the pastor], I was shocked to hear that."

"The point that is pretty hypocritical," Ruhle added, "for these pastors that talk so much about the most important thing is pro-life, it's stunning that they're willing to say that about unborn children, but they're not willing to consider these children who are being torn from their mothers and have no idea when they'll see them again."

"When you think about the welfare of a child, it should possibly never begin or end," she concluded.