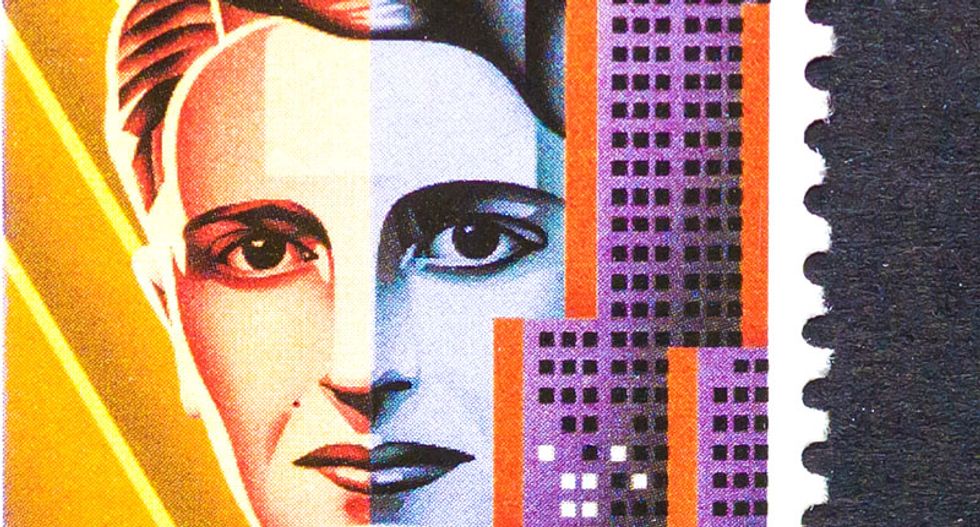 A postage stamp showing an image of Ayn Rand, circa 1999 (catwalker / Shutterstock.com)

Philosophers love to hate Ayn Rand. It’s trendy to scoff at any mention of her. One philosopher told me that: ‘No one needs to be exposed to that monster.’ Many propose that she’s not a philosopher at all and should not be taken seriously. The problem is that people are taking her seriously. In some cases, very seriously.

A Russian-born writer who moved to the United States in 1926, Rand promoted a philosophy of egoism that she called Objectivism. Her philosophy, she wrote in the novel Atlas Shrugged (1957), is ‘the concept of man as a heroic being, with his own happiness as the moral purpose of his life, with productive achievement as his noblest activity, and reason as his only absolute’. With ideals of happiness, hard work and heroic individualism – beside a 1949 film starring Gary Cooper and Patricia Neal based on her novel The Fountainhead (1943) – it’s perhaps no wonder that she caught the attention and imagination of the US.

Founded three years after her death in 1982, the Ayn Rand Institute in California reports that her books have sold more than 30 million copies. By early 2018, the institute planned to have given away 4 million copies of Rand’s novels to North American schools. The institute has also actively donated to colleges, with the funding often tied to requirements to offer courses taught by professors who have ‘a positive interest in and [are] well-versed in Objectivism, the philosophy of Ayn Rand’ – with Atlas Shrugged as required reading.

Rand’s books are becoming increasingly popular. The Amazon Author Rank lists her alongside William Shakespeare and J D Salinger. While these rankings fluctuate and don’t reflect all sales, the company her name keeps is telling enough.

It’s easy to criticise Rand’s ideas. They’re so extreme that to many they read as parody. For example, Rand victim-blames: if someone doesn’t have money or power, it’s her own fault. Howard Roark, the ‘hero’ of The Fountainhead, rapes the heroine Dominique Francon. A couple of awkward conversations about repairing a fireplace is, according to Rand, tantamount to Francon issuing Roark ‘an engraved invitation’ to rape her. The encounter is clearly nonconsensual – Francon genuinely resists and Roark unmistakably forces himself upon her – and yet Rand implies that rape survivors, not the rapists, are responsible. Might makes right and, as Roark states earlier in the novel, the point isn’t who is going to let him do whatever he wants: ‘The point is, who will stop me?’ Rand’s championing of selfishness, and her callousness to the unfortunate, finds echoes in contemporary politics. It would not be stretching a point to say that her philosophy has encouraged some politicians to ignore and blame the poor and powerless for their condition.

Rand champions self-sufficiency, attacks altruism, demonises public servants, and vilifies government regulations because they hinder individual freedom. Yet, she conveniently ignores the fact that many laws and government regulations promote freedom and flourishing. In Atlas Shrugged, the mysterious cult-like leader and Objectivist spokesperson John Galt and his clique run away to establish a colony off the grid, free from government interference, and free to create their own rules. Yet imagine the reality of a world without regulations such as those of an environmental protection agency. Neighbours would be free to pump smog into Galt’s utopia, pollute its water supply, or spray toxic pesticides that drift and poison residents. Yet Galt rejects any duty towards others, and expects none from others. In his own words: ‘Do you ask what moral obligation I owe to my fellow men? None.’ Galt is rich, so he might be able to buy out a few neighbours. Nonetheless, Rand’s philosophy – as espoused by characters such as Galt who represent her views – assumes that we live in a world with unlimited resources and property that can be insulated from others. She ignores the fact that we share the Earth – we breathe the same air, swim in the same ocean, and drink from shared water sources.

Some libertarian philosophers, such as William Irwin in The Free Market Existentialist (2015), have proposed variations of Rand’s ideology that introduce some state control to protect people and their property from harm, force, fraud and theft (although he doesn’t specifically support an environmental protection agency). However, for Rand, writing in her essay collection The Virtue of Selfishness (1964), ‘There can be no compromise between freedom and government controls,’ and to accept any form of government control is ‘delivering oneself into gradual enslavement’. Still, Rand didn’t always live by her own philosophy: in a stellar display of hypocrisy, she collected social security payments and Medicare later in her life. In another essay, ‘The Question of Scholarships’ (1966), Rand attempted to justify accepting government benefits as partial restitution for taxes paid, or that one expects to pay in the future – and only if the recipient objects to it. The problem is not only the complexity of calculating how much government support one could rightly collect back from taxes paid – since, presumably, she also used roads, tap water, police protection, and a myriad of other things that the government provides. But it’s also in contradiction with her point that there can be no compromise between freedom and government. Moreover, it’s disingenuous to actively participate in, and benefit from, the very same system that she complained about under the guise of mooching back what was mooched from her. It might be selfish, but it’s not, as she claimed, moral.

Vilifying Rand without reading the detail, or demonising her without taking the trouble to refute her, is clearly the wrong approach. Making her work taboo is not going to help anyone to think critically about her ideas either. Friedrich Nietzsche – a philosopher sometimes aligned, albeit superficially, with Rand, partly due to her Übermensch-like protagonists – warned in 1881: ‘The innocent will always be the victims because their ignorance prevents them from distinguishing between measure and excess, and from keeping themselves in check in good time.’

Rand is dangerous precisely because she appeals to the innocent and the ignorant using the trappings of philosophical argument as a rhetorical cloak under which she smuggles in her rather cruel prejudices. Her writing is persuasive to the vulnerable and the uncritical, and, apart from the overextended set-piece monologues, she tells a good story. It’s her novels that are the bestsellers, remember. Almost two-thirds of the thousands of reviewers on Amazon give Atlas Shrugged a five-star rating. People seem to be buying it for the story, and finding a convincing philosophy neatly packaged within, which they absorb almost without thinking. It’s not too much of a stretch to imagine what people find admirable in her characters: Rand’s heroes are self-interested and uncaring, but they’re also great at what they choose to do, and they stick by their principles. It’s a prime example – and warning – of fiction’s influential power.

Hoping that Rand’s ideas will, in time, just go away is not a good solution to the problem. The Fountainhead is still a bestseller, 75 years since first publication. And perhaps it’s time to admit that Rand is a philosopher – just not a very good one. It should be easy to show what is wrong with her thinking, and also to recognise, as John Stuart Mill did in On Liberty (1859), that a largely mistaken position can still contain some small elements of truth, as well as serving as a stimulus to thought by provoking us to demonstrate what is wrong with it. Rand’s rhetoric continues to enthral millions of readers, so we need compelling language and stories to provide counterarguments with eloquence. Imagine if a writer could persuade the millions who are reading Rand today to come to different, kinder and more compassionate conclusions, to see through her self-serving egoism rather than be seduced by her prose. We need to treat the Ayn Rand phenomenon seriously. Ignoring it won’t make it go away. Its effects are pernicious. But its refutation should be straightforward.