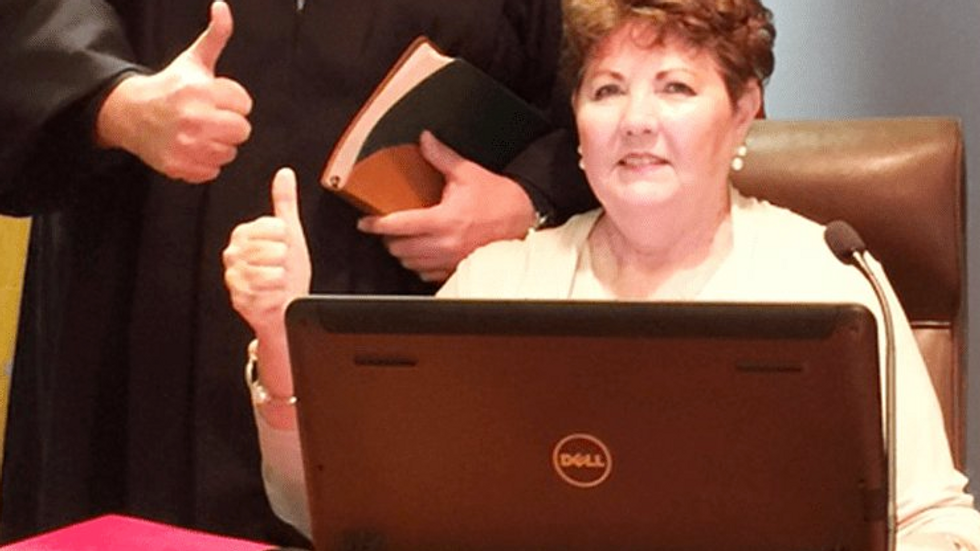 After a Republican school board member in Alabama was called out for sharing racist posts on Facebook, she doubled down by blaming former First Lady Michelle Obama and kneeling NFL players for being unpatriotic.

The Root reported that Jefferson County, AL school board member Donna Pike shared a racist post about Valerie Jarrett, an Obama-era White House official that was the subject of a similarly racist post made by Roseanne Barr.

"No! I'm not black!" reads the meme Pike shared about Jarrett on June 1. "I'm Valerie Varrett [sic] and I'm a Muslim, born in Iran."

A screenshot from another post Pike shared from a page called "Trump's Deplorables" calls the former First Lady "a disgrace" because she does not appear to have her hand over her heart during the national anthem. Light research conducted by The Root suggested the photo was edited, as other photos from the same event show Obama with her hand over her heart. 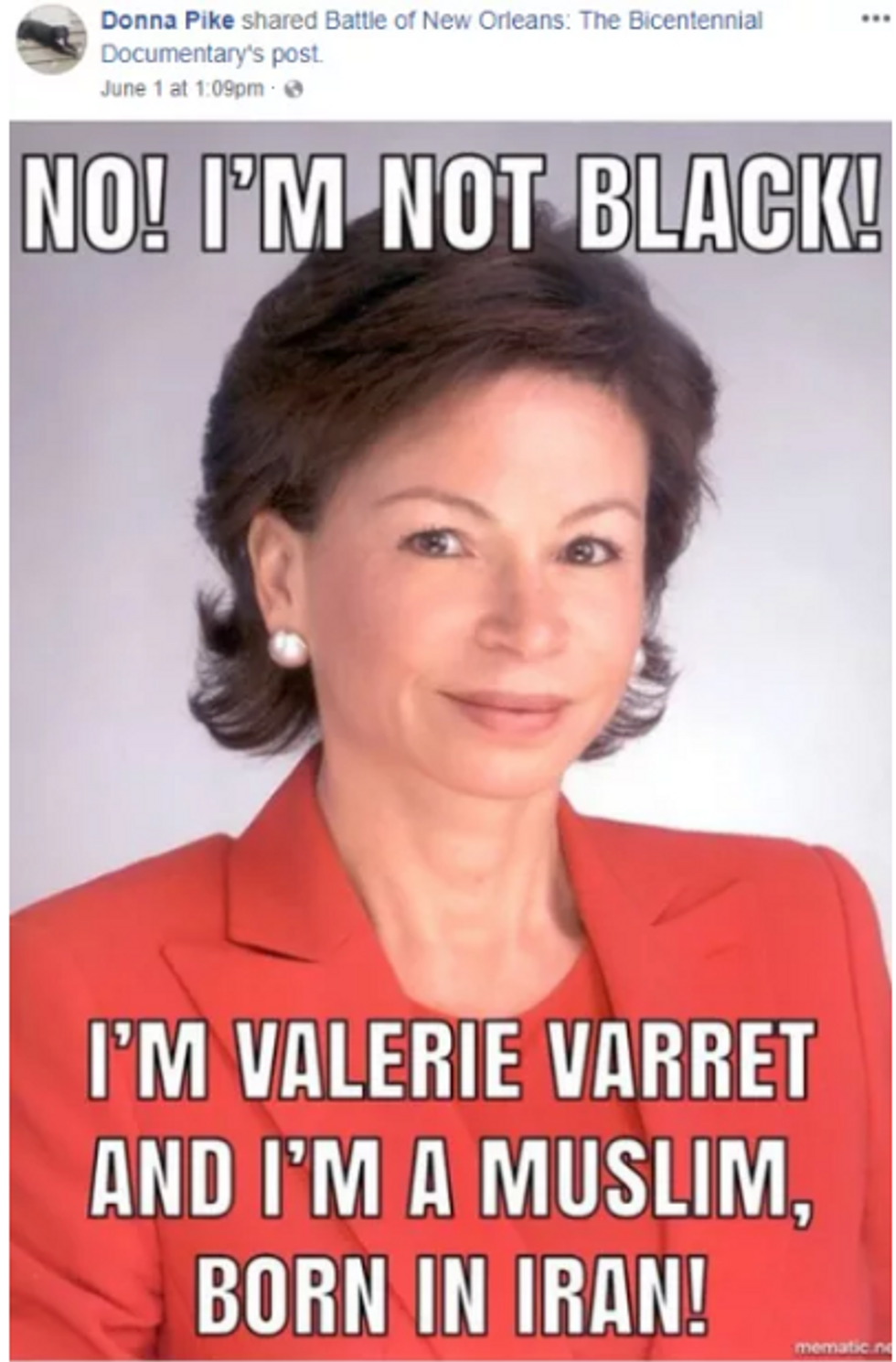 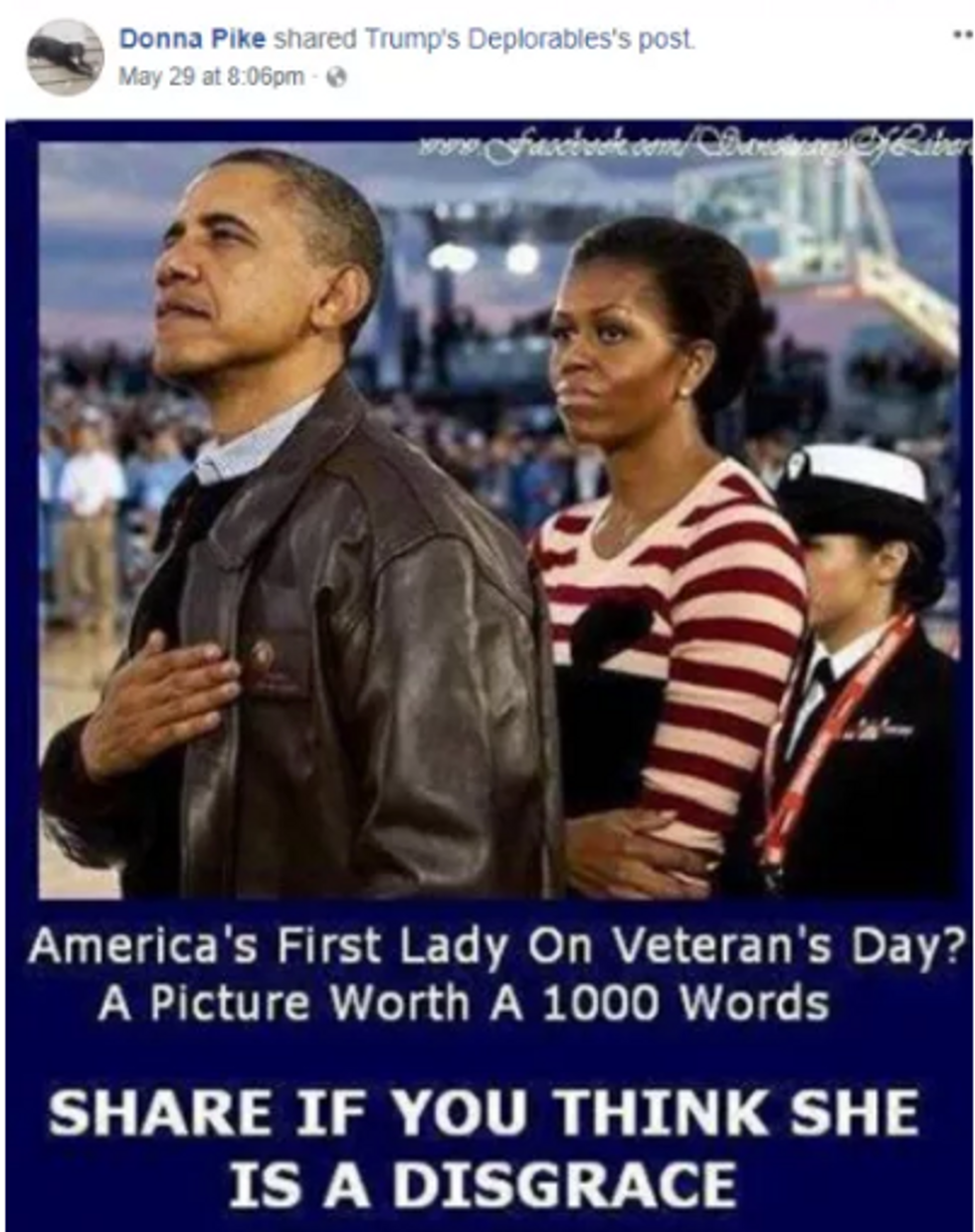 After being confronted by local journalist and activist Carlos Chaverst at a school board meeting earlier this week, Pike told her fellow board members she wasn't sorry for the posts.

"I shared it, and I’m not sorry I did,” she told the Jefferson Co. School Board. “And I meant it because it shows hypocrisy in our country. Some people can get away with it and some people can’t. It was not racist.”

She went on to cite her military veteran children when explaining why she shared the likely-edited photo of the former First Lady.

"I have a disabled veteran that’s a daughter and I have a son that’s a veteran," Pike continued. "And for her not to salute the flag, if you’ll look at the picture, was offensive to me. Now, will I apologize for that? Never.”

The Root noted that when the school board's head tried to discuss why her posts may be viewed by parents as problematic, Pike made a bizarre claim that insinuated she was oppressed.

"If we’re to state that we’re so oppressed that we can’t stand up for our children who fought for this country," she said, "I take offense to that."

After reiterating that she's not a racist, Pike made a tangential comment about NFL players protesting police brutality by kneeling during the national anthem — and then seemed to admit she may be racist.

You can watch video of Pike being confronted about her racist posts during a school board meeting below, via AL.com.