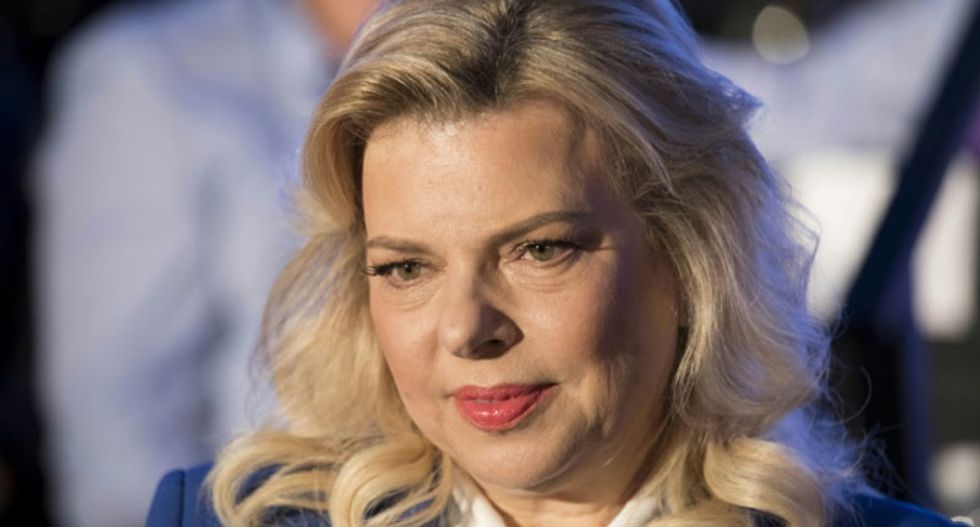 An Israeli prosecutor has charged Prime Minister Benjamin Netanyahu's wife Sara, seen here at a ceremony commemoratinng the Six-Day War of 1967, with fraud and breach of trust after a long probe into allegations she falsified household expenses. (EPA POOL/AFP/File / ABIR SULTAN)

Israeli Prime Minister Benjamin Netanyahu's wife Sara was charged Thursday with fraud and breach of trust after a lengthy police probe into allegations she falsely claimed meals worth $100,000, the justice ministry said.

The move represents the latest legal headache for leader Netanyahu and his family, as the authorities investigate the combative premier over allegations of corruption in a string of eye-catching cases.

The justice ministry announced that "the Jerusalem district prosecutor a short time ago filed charges against the prime minister's wife".

The ministry said Sara Netanyahu was accused of falsely declaring there were no cooks available at the prime minister's official residence and ordering "hundreds of meals from outside caterers at public expense".

From 2010 to 2013 Netanyahu, her family and guests received "fraudulently from the state hundreds of prepared meals (each including a number of courses) to the value of 359,000 shekels ($99,700)", the indictment read.

Netanyahu, a high-profile presence at her husband's side throughout his lengthy time at the helm, has denied any wrongdoing.

According to the charge sheet, the meals were ordered from a variety of well-known Jerusalem establishments, including an Italian restaurant, a Middle Eastern grill joint and a sushi establishment.

The trial is set to be held at the Jerusalem magistrates court, with the prosecution requesting it to be held before a panel of three judges due to the "public sensitivity" of the case.

The legal woes come as Netanyahu's husband himself is under the microscope on suspicion of a series of corruption offences.

In one case, the prime minister and his family are suspected of receiving one million shekels worth of luxury cigars, champagne and jewellery from wealthy individuals in exchange for financial or personal favours.

In another case, investigators suspect the premier of trying to reach an agreement with the owner of Yediot Aharonot, a top Israeli newspaper, for more favourable coverage.

Netanyahu has protested his innocence and vowed to remain in power, saying he is the victim of a "witch-hunt".

He also faces suspicions of government favours that allegedly saw regulatory breaks go to Israel's largest telecom firm Bezeq, in return for favourable coverage of him and his wife by a news website.

Last week he was questioned as a witness in a probe of alleged corruption over the state purchase of three German submarines.

He is not considered a suspect, but some of his close associates have been questioned several times.

Despite his troubles, opinion polls suggest Netanyahu's right-wing Likud party would remain the largest in parliament if elections scheduled for November 2019 were held now.