Protests across Spain as sexual abuse gang released on bail 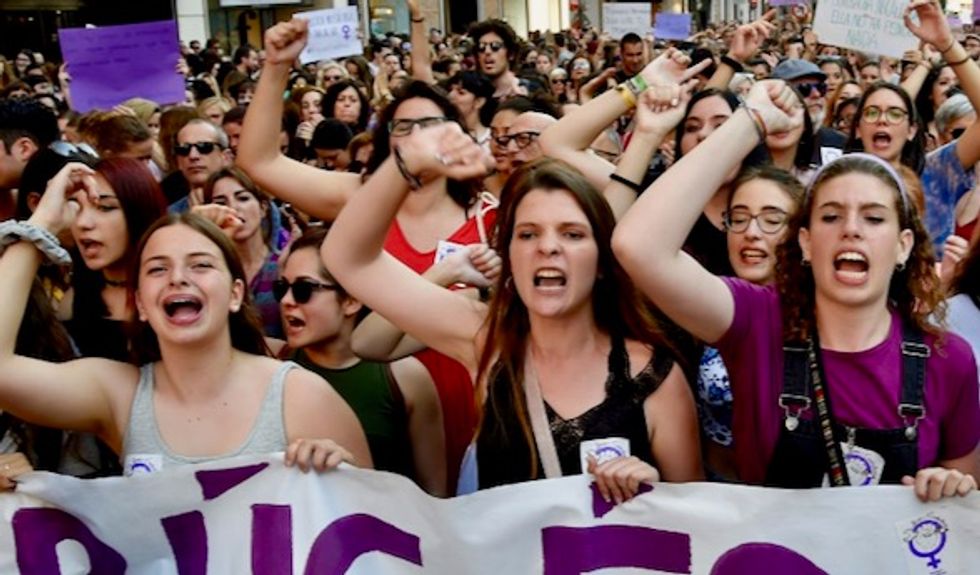 Protesters hit the streets across Spain for the second day running on Friday, after five men sentenced to nine years in prison for sexually abusing a young woman at Pamplona's bull-running festival were released on bail.

The men, who called themselves "The Pack" in a WhatsApp messaging group, had been accused of raping a woman, then 18, on July 7, 2016, at the start of the week-long San Fermin festival, which draws tens of thousands of visitors.

All five, aged between 27 and 29, were convicted of sexual abuse in April but were acquitted of the more serious crime of sexual assault -- which includes rape -- as the court did not consider the victim to have been subjected to intimidation or violence.

The men appealed their jail terms and a Pamplona court on Thursday ordered the five to be released on bail of 6,000 euros ($7,000) pending the outcome of the appeal.

Thousands of people of all ages demonstrated outside the justice ministry in central Madrid on Friday evening, shortly after the five men left jail after spending nearly two years in custody.

"I was stunned" by the court ruling, Aratz Beranoaguirre, a geologist, told AFP at the Madrid protest.

"Men have been educated with the idea that we can do anything, and with this ruling we have seen that you can rape and nothing happens."

The crowd chanted: "They don't believe us if they don't kill us."

Other protests were held in the southern city of Seville, the hometown of the five men, Pamplona -- where the crowd held a large banner that read: "No is no. Justice!" outside of city hall -- Granada, and elsewhere.

Thousands of people had already protested in Pamplona, Bilbao, Barcelona and other cities on Thursday after the court issued its ruling.

Women's groups took to social media to call the protests with the slogan: "If the pack hits the streets, we will as well."

Marches after the verdict in April brought tens of thousands of protesters out on to the streets.

AFP / JAVIER SORIANOProtesters raise their hands at a rally in Madrid

"It is not fair that they are released with a sentence of nine years, and just a few days before San Fermin, they can even go there," said Lucia Rodriguez, a 60-year-old protester in Madrid, referring to the upcoming running of the bulls festival which gets underway on July 6.

In its decision on Friday, the Navarre court said the five had been allowed out on bail because the social pressure on them made it "practically unthinkable" they would risk re-offending.

The men will remain under judicial monitoring. They have had their passports withdrawn and must report to court three times a week.

They are also banned from travelling to Madrid, where the victim lives.

One of the men is a policeman with the Guardia Civil -- who is currently suspended -- and another was once in the army. Several are "ultras" or hardcore fans of FC Sevilla.

The fact that the men videoed the attack on their smartphones and bragged about it within their WhatsApp group added to the outrage over the case.

afp/AFP / JOSE JORDANAn online petition calling for the five to be kept behind bars had garnered 657,000 names by Friday night

The mayor of Pamplona, Joseba Asiron, said Friday his office would appeal the decision to release them, saying there was "a growing distance... between society itself and certain decisions taken by the courts".

An online petition calling for the five to be kept behind bars had garnered 657,000 names by Friday night.

New socialist Justice Minister Dolores Delgado has not commented on the court decision, speaking only of a need to "change mentalities".

The first step announced by the government of Pedro Sanchez, who took office earlier this month at the head of cabinet that includes 11 women, was to train magistrates in awareness about violence against women.

Noelia Garcia, 41, said she did not trust that the situation would change with a new government dominated by women.

"That is not enough. There needs to be a reform of the judicial system. Judges from another era need to be replaced," she added at the Madrid protest.