Rachel Maddow explains how senators can suit up for a fight: 'Democrats are not the doormats Republicans want them to be' 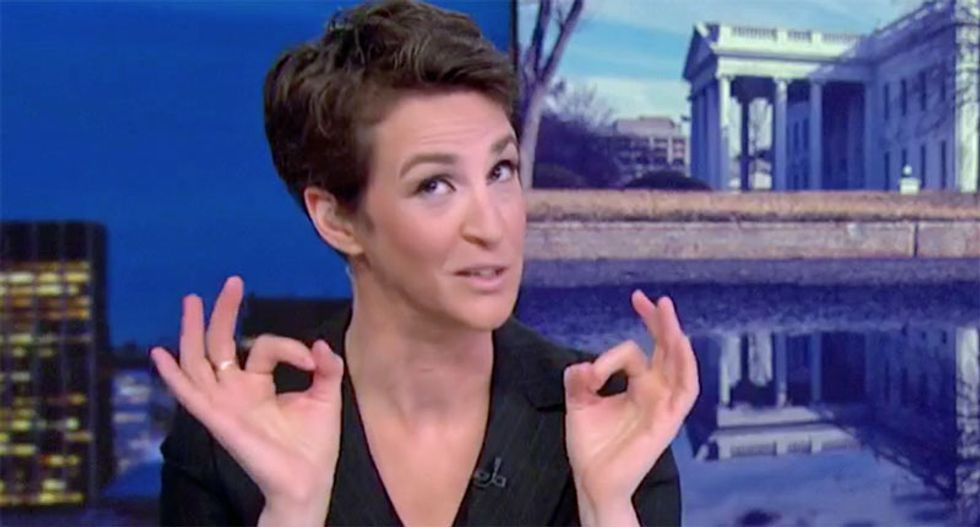 The host of MSNBC's 'The Rachel Maddow Show'

After a short history on how we got to this point in history, MSNBC host Rachel Maddow made the case for why Democrats should suit up for one hell of a fight in the U.S. Senate.

"The weight of this moment, the consequence of this moment is all because of what Republicans did when they blocked President [Barack] Obama from getting to name the last justice," she recalled. "What Republicans did with Merrick Garland is something that has never been done before, and they did it without any hesitance, without any shame. They just declared, 'New rule! This president isn't going to get to name a new justice. Nope. No nominees considered until after the election. New rule.' That is how we got to this moment. That's why today is so important."

Today, Democrats have a decision to make, she said.

Maddow walked through a series of Democratic senators who have already stepped up to say they're ready to stop President Donald Trump from nominating a right-wing judge.

"Now I know what you're thinking, 'Ooh, Democrats, right? Up on your hind legs, nice. But impotent, what can you actually do? You're in the minority. All right.' Two things to keep in mind here: Number one is big Luther [Strange], who is not there anymore. The junior U.S. Senate seat from Alabama was held by big Luther Strange, Republican, last year when the senate confirmed the last supreme court Justice Neil Gorsuch.

Given that Trump decided that he's going to appoint an anti-choice justice, that means that with the 51 to 49 senator split, it means a single Republican senator will be responsible for overturning Roe v. Wade. Maddow noted that Sen. Susan Collins (R-ME) was awarded with the 2017 Barry Goldwater Award from Planned Parenthood's Republican Advisory Board. Would she vote to overturn Roe?

"Now, no matter the specific policy positions or the liberalness or the conservatism or the complicated home state politics of any particular Democratic senator, no Democratic senator has a reason to volunteer to be a doormat on the issue of the Supreme Court, right? Democrats as a unified block, every single one of them, they have no reason to go along with any meetings and hearings, any votes on the Supreme Court nominee before the election, right?"

This is all because the GOP insisted on what they did during Obama's administration.

"Every Democratic senator in the country is about to hear from every single one of their Democratic constituents every day from now until the election until it's clear that the Democrats will all be unified on that no Doormat Caucus point," she said

She noted if every Democrats agrees not to be a doormat to the GOP, everything will be fine. Everyone, however, has to be unified, and this is the true test for the Democratic Party.

"If democrats pull this off, if they stand together and they fight this for the next four months and they win this, they will stop the Trump Supreme Court nominee," she closed. "They will save, among other things legal abortion in this country, at least for the time being. They will prove themselves not what Republicans expect them to be, right? And they will give themselves a chance of winning back control of Congress in Washington, which will give them a thumbs-up or thumbs-down say in who the next nominee. They've got four months to do it, starting today. That's it. Simple."

She argued, that if a Democrat can win in Alabama in Luther Strange's seat, then anything is possible. Democrats just have to suit up for it.