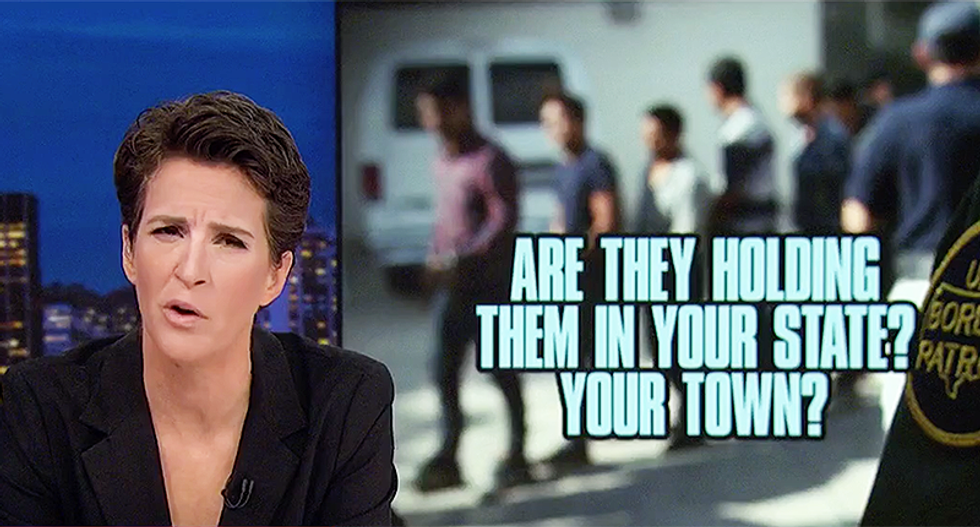 The Justice Department can't afford the time or the budget to prosecute the thousands of families waiting for entrance on the U.S./Mexico border. Wednesday night, however, MSNBC's Rachel Maddow revealed that lawyers in the Judge Advocate General's Corps or JAG Corps has been asked to rush to the border on the Pentagon's dime.

It's "special unprecedented 6-month shifts as, 'special assistant U.S. Attorneys,'" Maddow reported. "The Justice Department has asked the Pentagon to ship active duty military lawyers to the border to prosecute people picked up at the border, including parents who were having their kids taken away from them. We have never heard of anything like this before."

She said that the Defense Department has agreed to abide by the "unprecedented request." It was only after Maddow's research team confronted the DoD with the emails they confessed that the story was true.

"An urgent request, DOD has directed the armed services to support the Department of Justice by providing 21 attorneys to prosecute immigration crimes in U.S. district courts," Maddow read from the email. "That means federal courts. 'For six months in the following six cities. Yuma, Arizona, Los Cruces, New Mexico, El Paso, Texas, and McAllen, Texas.' The Justice Department has apparently told the Pentagon, 'We are looking for litigators with general courtroom experience and we'll provide basic training at the U.S. Attorney's office on immigration, crime, and federal criminal procedure."

Maddow mocked the claim that the litigators might not have courtroom experience doing any kind of immigration law, "but apparently don't worry, they're going to get a little bit of basic training and then they'll get right in the courtroom."

She noted it is the first indication they had seen anywhere that something like this was happening.

In a statement provided to Maddow, the Pentagon said, "The Secretary of Defense has approved a Justice Department request to detail 21 attorneys with criminal trial experience to the department of justice for a period of 179 days. The DOD attorneys will be attorneys and will work full time assisting and prosecuting reactive border immigration cases, with a focus on misdemeanor improper entry and felony illegal reentry cases. cases."

From a civilian perspective, Maddow explained that the military budget, "which pays for, you know, bombs and guns and ammo and all that stuff and the salaries of active duty military personnel," will now be shifted to pay for warring against migrant families on the border.

"The military budget is, by this program, effectively being repurposed and diverted into Jeff Session' Department of Justice to help him handle this new huge backlog of immigration prosecutions that they've just created because of the Trump administration policy, for which they apparently made no plans in terms of how they were actually going to implement it," Maddow said. "They didn't bother to staff up more prosecutors to do this kind of prosecuting work. They just decided that they'd start prosecuting everybody, wholesale, with no plan for who would actually do the work."

Watch her full take below: