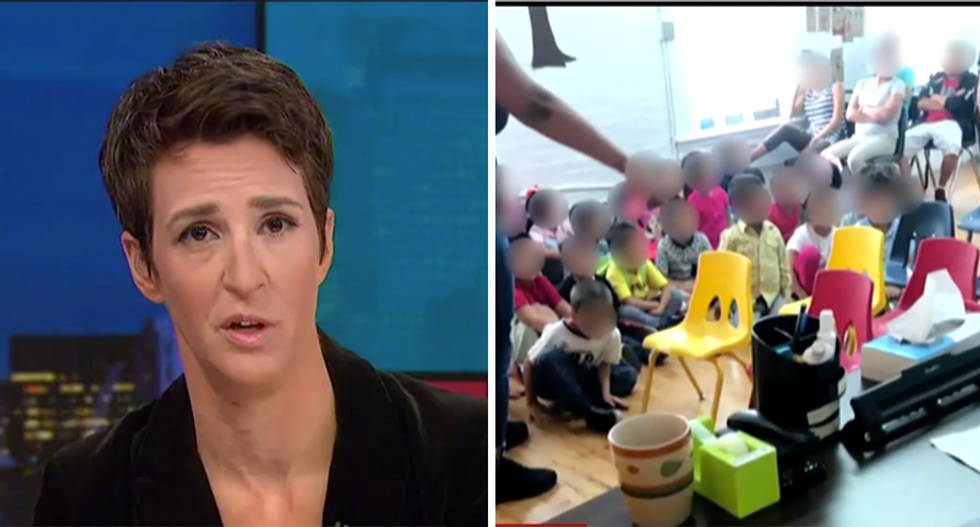 A former teacher of a dentition facility in New York, has smuggled footage out that she filmed of the children before she quit her job.

Maddow noted that the use of the facility was unknown to most New York officials including the governor and Mayor Bill de Blasio.

"Now for the first time we can show you footage from inside that facility," Maddow said. "These images were shot surreptitiously by a woman who worked at the facility until last week. This footage was shot late last week. The worker who took these images and took the footage I'm about to show you has since quit her job at this facility. She has provided this material to MSNBC and NBC news on the condition of anonymity."

Maddow said that they asked her why she did it and provided the video to them, she said, "I am here today because I feel like it's important to make a difference. I feel that it's time for everybody to stand up and to stop being afraid and actually help these children that are being separated from their parents."

"It's very heartbreaking to know there's children, even if it were just one, but there's a lot of them in my program, and it's sad to know that these children are crying for their parents. They don't know where their parents are," the woman also said.

Maddow said that the teacher said there was a huge influx of younger children arriving in the last few months. That's how she realized it was as the result of the Trump administration's policy.

"There was a huge influx," the woman said. "The amount of kids that are little, that are coming alone, compared to the amount of teenagers, it's way higher. So that tells you a lot. How are these kids coming alone? That's not okay. They're not coming alone. They're getting separated at the border."

She also showed video of a young girl upset and missing her mother. There's also audio recordings of an adult speaking in Spanish saying that the children are not allowed to speak to the press at all.