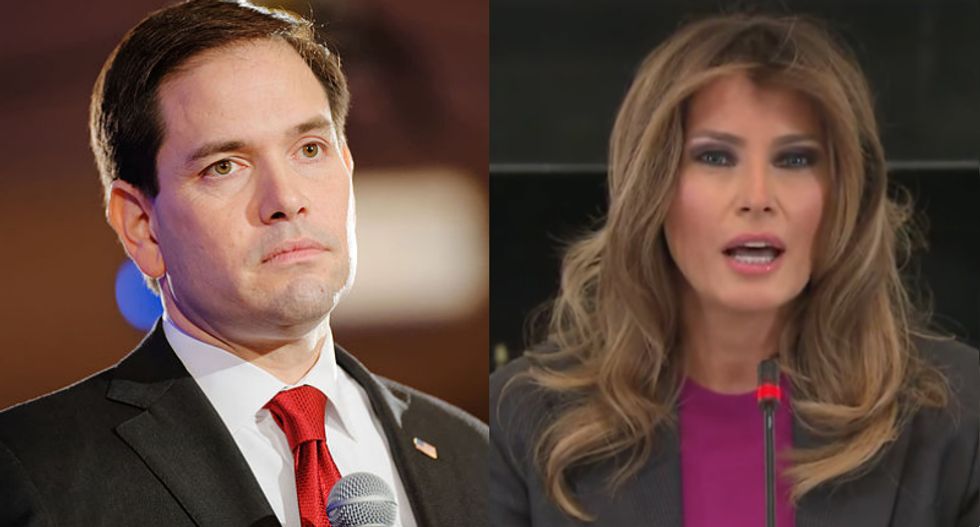 Sen. Marco Rubio (R-FL) inspired a frenzy of angry (and hilarious) tweets after attempting to defend First Lady Melania Trump from critics who have what he calls "Trump Derangement Syndrome."

"I know for a FACT that @FLOTUS has been a strong voice of compassion for migrant children," the senator tweeted on Friday. "The vicious treatment of her over the last day is a reminder of how Trump Derangement Syndrome,where hatred for him justifies everything,has become an epidemic."

"Here was @glennbeck during the Obama years losing his mind over the fact that Michelle Obama wore a white outfit to visit an oil spill, comparing her to Marie Antoinette, saying it made her seem disinterested, calling it an 'outrage,'" the journalist's thread continued.

Molloy went on to point out that Fox News' Lou Dobbs and other media outlets and figures were up in arms over President Barack Obama wearing a tan suit.

"I still can't believe these were actual stories," Molloy tweeted, noting that "the actual topic he was discussing that day was Russia invading Ukraine, but that got lost in all of this."

Check out more hilarious responses to Rubio's Melania defense below.

starting a new drinking game where every time i get enraged at something marco rubio says i "take a shot" and by th… https://t.co/D8AzpXo4Xj
— Kristen Arnett (@Kristen Arnett) 1529684892.0

@marcorubio @FLOTUS I’m sure if Michelle Obama had worn that jacket your response would be exactly the same. 🙄
— Jay Couture (@Jay Couture) 1529682136.0

@marcorubio @FLOTUS The republicans love to say things are shameful, but criticism of the First Lady for modeling a… https://t.co/2LuUha4Ekh
— Molly Jong-Fast🏡 (@Molly Jong-Fast🏡) 1529683655.0

In a related topic, among the worst kind of human beings are the children of immigrants who then slam the door shut… https://t.co/fpmg19BLdd
— Gabe Ortíz (@Gabe Ortíz) 1529684009.0

Wouldn’t it be nice if @marcorubio cared this much about kids being killed in their classrooms. https://t.co/up8LSV4BPL
— Andrew Weinstein (@Andrew Weinstein) 1529685539.0

Hey who had the bingo card that needed the space where Rubio uses the term Trump Derangement Syndrome? You can call… https://t.co/e1aDFlupE0
— Mister Magic (@Mister Magic) 1529684166.0

i’ve not yet determined the precise scientific or mathematical explanation for how an organism could possibly have… https://t.co/b43fWLmJcZ
— Davis Hurst (@Davis Hurst) 1529686769.0