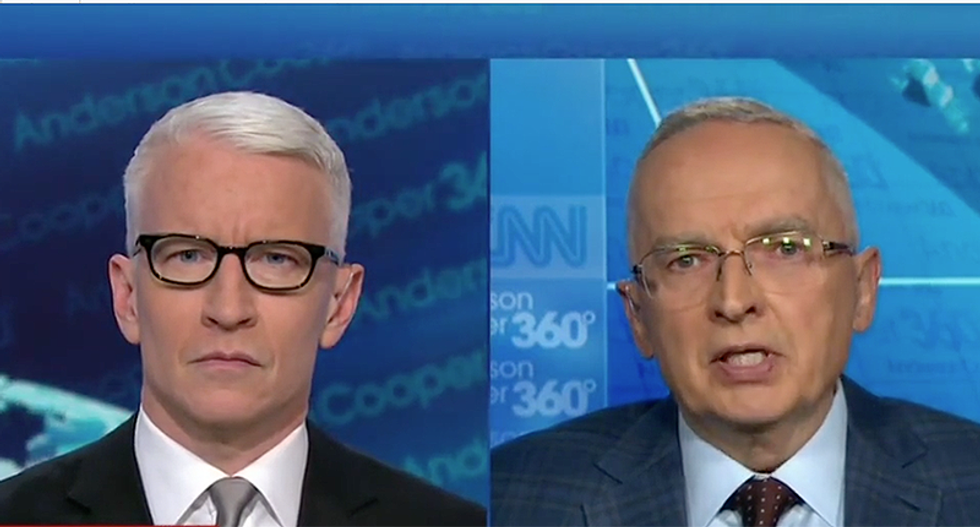 In a CNN interview with Anderson Cooper, retired Lt. Col. Ralph Peters (U.S. Army) warned that the upcoming meeting with Russian President Vladimir Putin might never become public. He noted the possibility is concerning given the president's history with Russia.

"Summits may be normal in general, but with these specific characters, Vladimir Putin and Donald Trump, it is cause for alarm," the former Fox News commentator said. "As we know before Trump — if John Bolton can do one service for his country is to do all he can to prevent a one-on-one Putin meeting behind closed doors. He knows how to work Trump and he studies him and our president is impulsive and undisciplined. And we don’t know what he might blurt out. We don’t know what he might agree to behind closed doors. We are unfortunately, Anderson, we have a president we cannot trust."

Cooper noted that in the past former President George W. Bush said that he looked into Putin's eyes and saw someone he could work with. He ultimately had to admit he was wrong.

"And also, of course president Obama was caught on a hot mic, he could do more for Vladimir," Peters continued. "Three presidents in a row now, have imagined that they could deal with Vladimir Putin. Somehow work to our benefit and the world’s benefit. And Putin has devoured each one of them. Devouring Trump, whether or not he has something on Trump."

He went on to cite lines from an A. E. Housman poem:

The Russian bear is huge and wild.

He has devoured the infant child.

The infant child is not aware

It has been eaten by the bear.

"And President Trump is that infant child," Peters explained.

He also explained that American allies are terrified because Trump is so "unpredictable."

"He doesn’t do his homework. He doesn’t seem to understand the context of why those sanctions are in place," Peters continued. "Vladimir Putin invaded a neighboring country twice. He assassinates dissidents. He assassinates journalist. His force has committed untold atrocities in Syria. He's worked to undermine our election, undermine European elections with quite a bit of success. But we need people to ride herd on this president. It is a very, very tough job. This is going to be a test for John Bolton as to his integrity and ethics. Now he is, for as long as I have known him, he has been tough on Russia, tough on Putin."

He closed by saying, "we'll see" what happens.