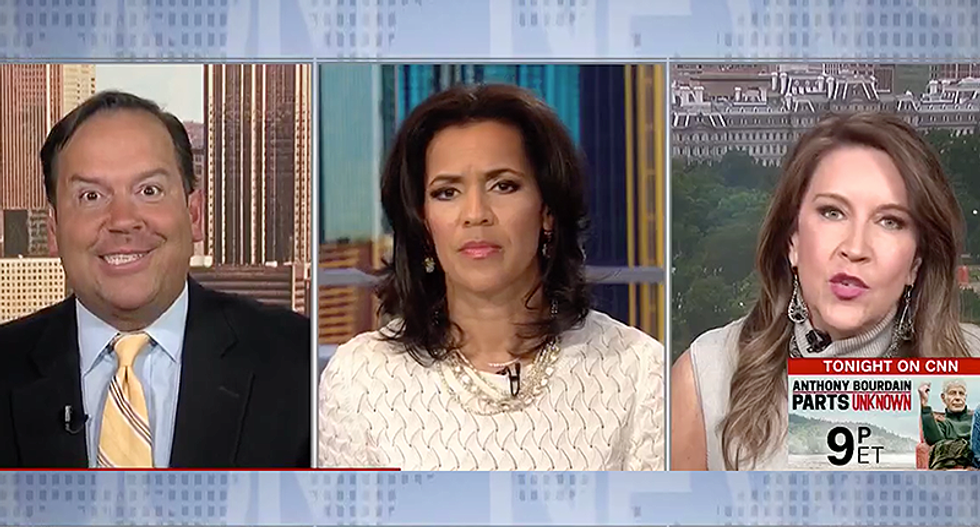 The facts weren't on Steve Cortes' side during a CNN political debate Sunday with Democratic strategist Maria Cardona.

During a discussion about the ongoing migrant crisis on the border that is separating families, Cortes claimed that all of the families that are being taken into custody are committing a crime and aren't following the rules for claiming asylum.

Host Fredricka Whitfield attempted to disagree with the claim by Cortes, but the conservative ran roughshod right over her attempt at a correction.

"No, it's not. Fredricka, it's not accurate," he said of the claim families are being separated even if claiming asylum. "If you show up to a port of entry in the United States with your children and request asylum lawfully, you are not separated from your family. You are not."

Cortes clearly hasn't been paying attention. There are at least two mothers who are suing the federal government after arriving at a port of entry and claiming asylum. One was at the San Luis Port of Entry, where Beata Mariana de Jesus Mejia-Mejia had her 7-year-old taken from her. The 38-year-old mother was seeking asylum from an abusive husband, who she said beat her and threatened to kill her. She's now suing.

Another was a mother and child who came through the Port of Entry at San Diego. Her six-year-old daughter was taken from her, despite the family making it through the initial asylum screening process. Her daughter was then taken to Chicago and held in detention, where she spent her seventh birthday alone. She is also suing the federal government. There are many others.

He went on to say that many of the people coming through the border are from central and South America and are simply fleeing economic depressions in their own country. Jesus Mejia-Mejia is obviously not one of those. One young boy had his left eye and arm injured from a gang in Guatemala. Despite naming MS-13 "enemy No. 1," President Donald Trump and Attorney General Jeff Sessions have decided that those fleeing gang or domestic violence are not eligible for asylum.

Despite multiple attempts by Whitfield and Cardona to fact-check Cortes, he kept talking over them and refusing to allow them to speak.