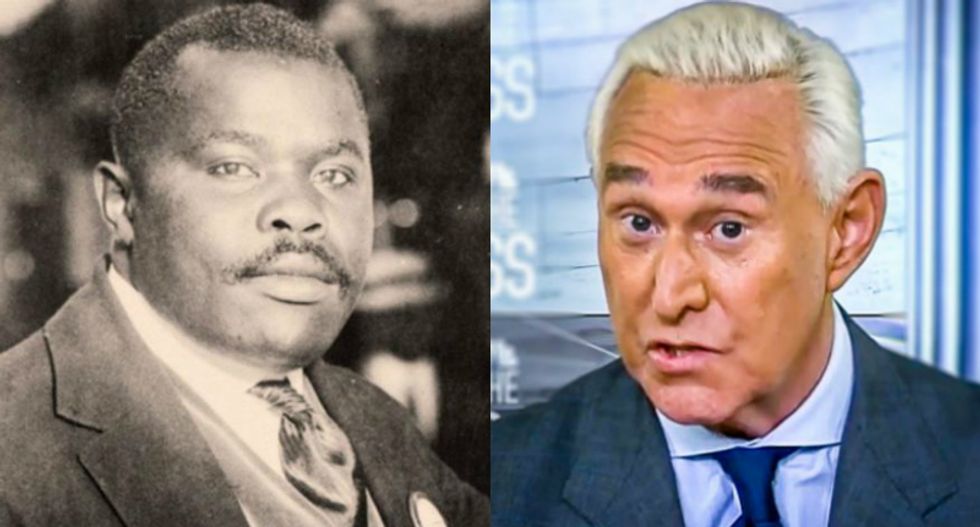 Donald Trump's sometimes-consiglieri Roger Stone claims he urged the president to pardon black nationalist figure Marcus Garvey — but the icon's family has no idea who Stone is, nor have they heard of the floated pardon for the man who died in 1940.

The Daily Beast reported Friday that Stone told its reporters about the potential Garvey pardon that would exonerate the famous founder of the Universal Negro Improvement Association and African Communities League, but did not respond to follow-up questions or include any reasons for the suggestion.

Charged with mail fraud by infamous FBI director J. Edgar Hoover, Garvey eventually had his five-year sentence commuted after serving three years by President Calvin Coolidge "on condition that he be deported to Jamaica," the report noted. The leader's son, Dr. Julius Garvey, launched a campaign during the Obama administration to exonerate his dad — but when reached for comment by the Beast, the icon's offspring said he didn't know who Stone is and had not heard of any revamped pardoning campaign for his famous father.

"We have not pursued it with the current president or the Department of Justice,” Garvey told the Beast, adding that he's “not sure of the direction [Trump] is going in with his pardons."

"It seems he is responding more to celebrities more than out of a reason of social justice," the younger Garvey continued. "So I don’t know if my father fits in that context.”

Garvey, the report noted, is a strange choice for Stone — the vocal black nationalist and civil rights forebear encouraged African Americans "to pursue self-reliance, economic liberation, and the revitalization of the African continent." With his Black Star shipping line, Garvey encouraged black Americans to return to Africa — a pursuit that eventually led to his conviction.

“J. Edgar Hoover targeted him when he just came out of law school,” Julius Garvey told the Beast. “He was the new head of the FBI and he had the first black agent infiltrate his movement. There was no evidence against Garvey. The whole thing was travesty of justice.”

Stone, the report noted, mentioned the Garvey pardon suggestion just once before, in a 2017 Reddit thread where he told users he wanted Trump to announce the pardon during Black History Month. Trump has never mentioned the suggestion.