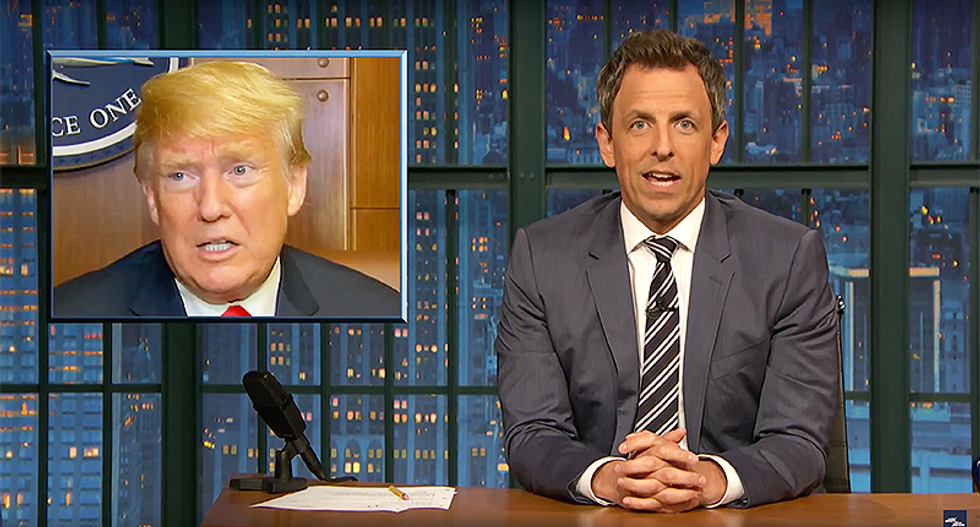 The only way President Donald Trump manages to do something thoughtful, kind and helpful for anyone is when he makes it up in his head, accused "Late Night" comedian Seth Meyers.

During his Thursday "Closer Look" segment, Meyers played a clip of an interview Trump did Wednesday with Bret Baier in which he claimed families have begged him to bring back their son's remains.

“The soldiers that died in Korea, their remains are going to be coming back home,” he said aboard Air Force One. “And we have thousands of people that have asked for that, thousands and thousands of people. So many people asked when I was on the campaign, I’d say ‘Wait a minute, I don’t have any relationship…’ but they said, ‘When you are President, we’d love our son to be brought back home.’ You know, the remains."

"There's no way that story's accurate," Meyers pointed out the lie.

Factually, the Korean War armistice was signed in 1953. Any parent of a fallen soldier in the Korean War would likely be over 100 years old today. The "thousands and thousands" would mean the parents of 5,300 soldiers killed in the war, mostly over 100, were all still alive and reaching out to Trump.

"Why does Trump always have to make up a little one-act play where someone begged him for something and he got it done?" asked Meyers. "If he signed a bill making June 14 National Cupcake Day, he would say, 'Oh, a little old lady -- she came up to me, she said, 'Please, Mr. Trump, my dying son's wish was June 14 would be Cupcake Day. Please, sir. Is there anything you can do?' And I said, 'I would, but the Democrats won't let me.' But then, I did it because I am strong and I absolutely don't have dementia.'"