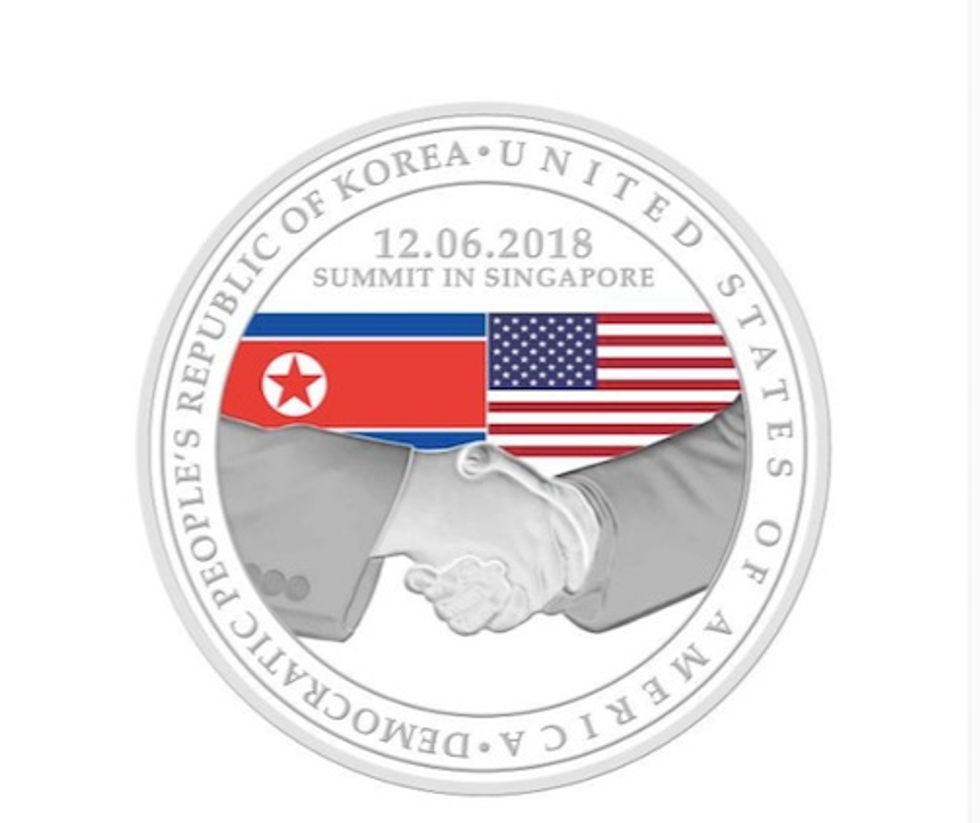 Singapore on Tuesday unveiled a commemorative medallion ahead of next week’s summit between the U.S. and North Korean leaders in the wealthy city-state, carrying the inscription ‘World Peace’ in large letters on one side.

The words on the medallion, featured on the online shop of the Singapore Mint, are accompanied by the dove and olive branch motif, a biblical symbol of peace, as well as a rose and a magnolia, the national flowers of the two countries.

The other side of the souvenir, which costs more than $1,000 for the version in gold, depicts two hands clasped in handshake in front of both nations’ flags and the June 12 event date.

The meeting between Donald Trump and Kim Jong Un will be the first ever between a sitting U.S. president and a North Korean leader. After a war of words that lasted months, it aims to start a discussion on ending the North’s nuclear weapons program in return for diplomatic and economic incentives.

South Korean President Moon Jae-in has said Trump deserves a Nobel Peace Prize for his efforts to end the standoff.

Last month, the White House also unveiled commemorative coins for the summit, making for an awkward juxtaposition when Trump canceled the event on May 24, citing Pyongyang’s “open hostility”, although he subsequently revived the talks.

A small Southeast Asian nation with good ties to countries both East and West, Singapore tends towards neutrality, projecting itself as the region’s answer to Switzerland.

In 2015, Singapore hosted a historic meeting of the leaders of Taiwan and China, the first since victory in a civil war for the Communists in 1949 confined their Nationalist foes to the island.

The exact venue of the Trump-Kim summit has yet to be confirmed, although Singapore has declared a special event zone including its foreign ministry, the U.S. embassy, and several large hotels, such as the Shangri-La.

Singapore retailers are also banking on the summit, with pubs offering themed drinks to lure some of the thousands of journalists and delegates expected to visit.

Ukraine's Ministry of Defense trolled Russian tourists spending their summers in Crimea this week after the country's military carried out a successful attack on a Crimea-based Russian air base.

As CNN reported earlier this week, the surprise attack on the air base resulted in at least seven Russian planes being destroyed, including Su-24 bombers and Su-30 multirole fighter jets.