South Korea and US to announce suspension of major military drills this week: report 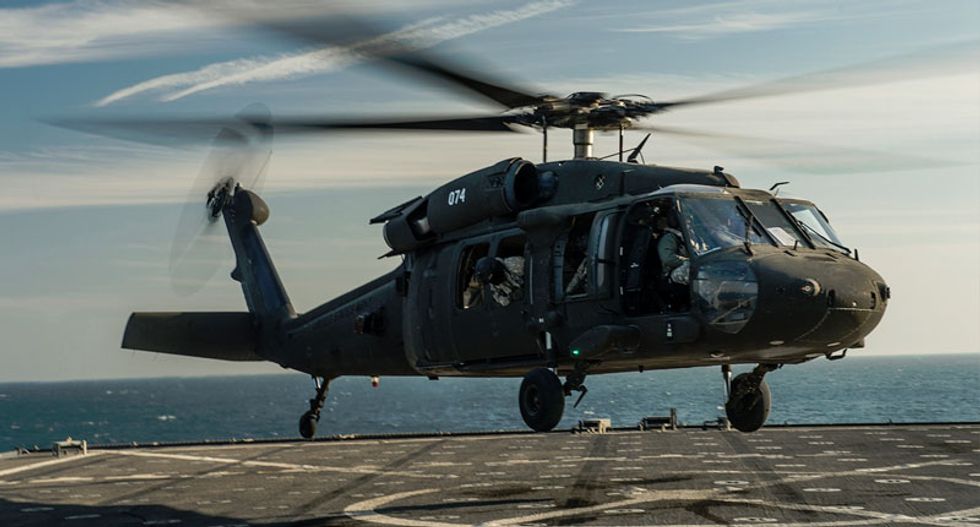 A U.S. Army UH-60 Blackhawk helicopter lands on the flight deck of the amphibious dock landing ship USS Harpers Ferry in the Arabian Gulf in a December 26, 2013 handout photograph. Seven Marines and four soldiers were unaccounted for early on Wednesday morning after their Army helicopter crashed during a night time training mission in Florida, a military official said on March 11, 2015. REUTERS/US Navy/Mass Communication Specialist 3rd Class Mark El-Rayes/Handout via Reuters

South Korea and the United States are expected to announce the suspension of “large-scale” military drills this week, with the provision that they would restart if North Korea failed to keep its promise to denuclearize, news agency Yonhap said on Sunday.

Immediately after the announcement, U.S. forces in Korea said they had received no guidance on stopping any drills, and South Korean officials said they were trying to figure out which exercises Trump was referring to.

However, in a sign Seoul may be open to suspending drills, South Korean President Moon Jae-in said on Thursday his government would need to be flexible when it came to applying military pressure on North Korea if it was sincere about denuclearization.

Yonhap also reported on Sunday that during military talks between the two Koreas on Thursday, South Korean officials asked their northern counterparts to relocate artillery 30 to 40 kilometers away from the heavily fortified military demarcation line that divides the two countries.

The South’s defense ministry denied it made such a request, Yonhap said.

The talks, the first in more than a decade, held in the border village of Panmunjom in the demilitarized zone (DMZ), followed an inter-Korean summit in April at which leaders of the two Koreas agreed to defuse tensions and cease “all hostile acts”.

North and South Korea failed to reach any concrete agreement during those talks, officials said.

North Korea proposed to Seoul to disarm, on a trial basis, the Joint Security Area in Panmunjom, the only site in the DMZ where both countries’ soldiers stand almost face to face, the South’s presidential spokesman said on Friday.

About 28,500 U.S. troops are stationed in South Korea, a legacy of the Korean War, which ended in 1953 in an armistice that left the two Koreas technically still at war.

At a Senate hearing on Thursday, Trump’s nominee to be ambassador to South Korea, retired Admiral Harry Harris, backed the idea of a “pause” in major military exercises. He said his understanding was that any suspension would involve only major military exercises and that regular training of U.S. forces in South Korea would continue, although final decisions were up to the Department of Defense.

The U.S.-South Korean exercise calendar hits a high point every year with the Foal Eagle and Max Thunder drills, which both wrapped up last month.

The next major drill, Ulchi Freedom Guardian, is planned for the end of the summer.

Last year, 17,500 American and more than 50,000 South Korean troops participated in the Ulchi Freedom Guardian drills, although the exercise is mostly focused on computerized simulations rather than live field exercises that use weapons, tanks or aircraft.