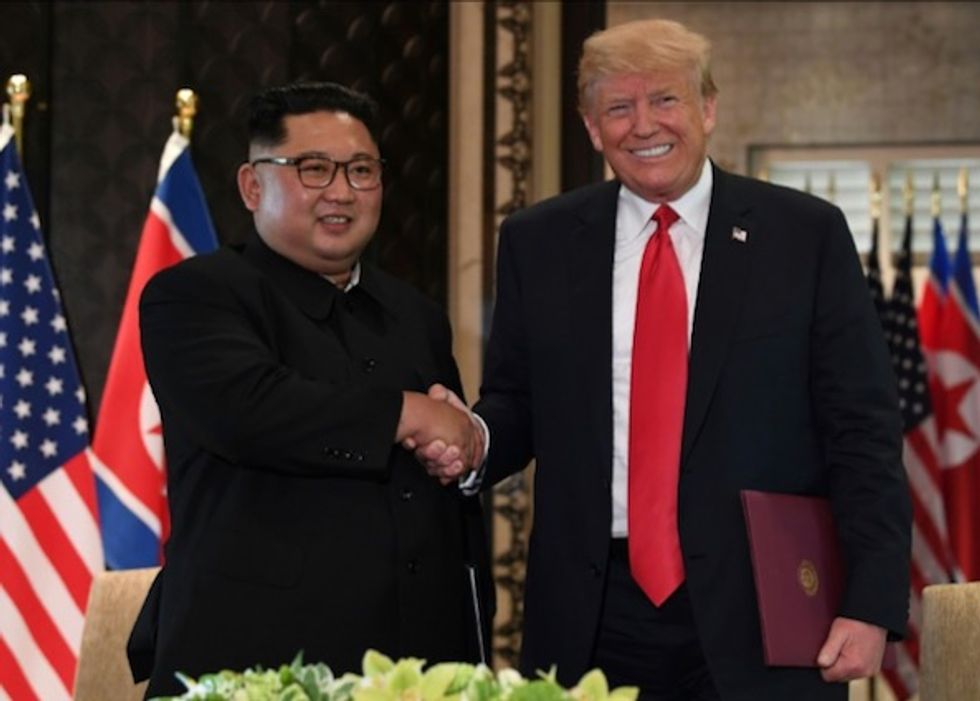 Donald Trump's warm embrace of North Korean dictator Kim Jong Un after a spectacular bust-up with G7 allies is the latest example of what critics say is a worrying penchant for autocrats.

The backslapping, smiles and handshakes in Singapore on Tuesday stood in conspicuous contrast to the furrowed brows and piercing looks of a summit just days before in Canada.

Whereas Trump looked tired and annoyed in Quebec, where he was surrounded by leaders of democracies, he could barely have been more relaxed around the lunch table with Kim -- a man who oversees industrial scale human rights abuses and is suspected of ordering the assassination of his own brother last year.

"Getting a good picture everybody?" he joked with photographers before sitting down to ice cream with Kim, "so we look nice and handsome and thin."

At a post-summit press conference, Trump praised Kim as "very smart" and a "very good negotiator," in the same breath as warning critical statements by Canada's prime minister would cost the country "a lot of money."

Trump's embrace of strongmen and autocrats has long been a point of contention at home.

He has repeatedly praised Russian leader Vladimir Putin and has voiced admiration for Philippine President Rodrigo Duterte, whose drug policies have resulted in thousands of deaths.

But the juxtaposition of Trump's treatment of Kim and his disdain for G7 friends has pushed criticism to new levels.

"The president disrespects our closest allies and gives a pass to dictators," said Democratic congresswoman Nanette Barragan. "I never thought I would see the day."

For Trump's fiercest critics, it is just more evidence of a dangerous predilection for authoritarian figures.

"How long will you remain silent as President Trump lays ruin to our alliances and tears apart the very fabric of our democracy?" Democrat Adam Schiff asked his Republican colleagues.

"Patriots do not stand mute when our country is in jeopardy, no matter what party occupies the White House."

Trump's joint stroll and bonhomie with Kim was too much even for some of the party faithful.

"If Obama had had the last 24 hours that Trump has had, the GOP would be demanding his impeachment," said prominent Republican commentator Erick Erickson.

The White House has balked at the notion that Trump is more comfortable around strongmen than fellow democrats.

When a CNN reporter put the point to Trump in Canada, Trump denounced him as "fake news" and his national security advisor John Bolton laughed derisively.

But some observers say there are more personal, less ideological, reasons for Trump's behaviour -- he likes people who praise him.

The Putins, Kims and Dutertes of the world have been more than willing to lavish praise when needed.

In contrast, fellow G7 leaders -- many of whom have electorates that distrust the businessman-turned-president -- are not given to massaging his ego.

"The G7 made clear that for Trump it's all about whether people respect him and see him as successful," said Kelly Magsamen a former top Pentagon Asia specialist.

"He also appears to be easily manipulated by dictators who have figured this out."