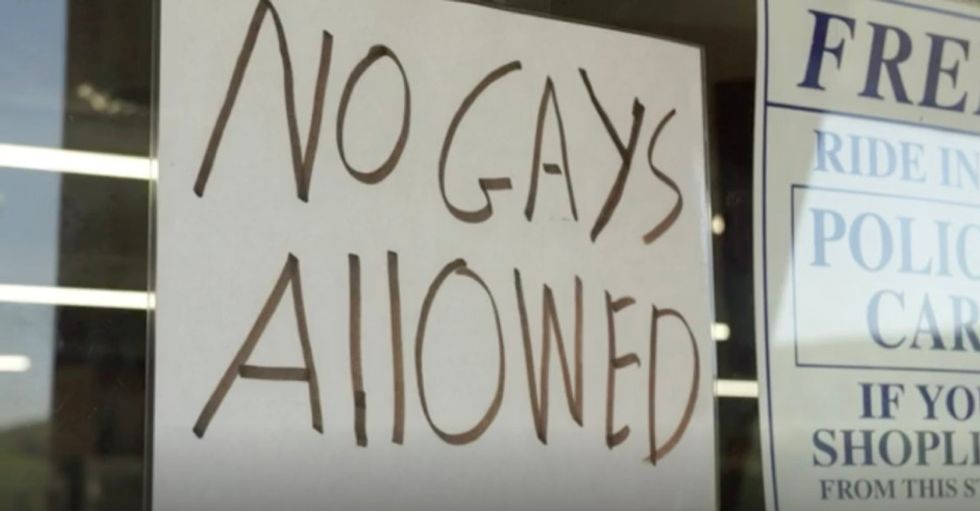 It was 2015, days after the U.S. Supreme Court ruled same-sex couples have the same rights and responsibilities as different-sex couples to marry. Tennessee hardware store owner Jeff Amyx was not putting up with that, so instead he put up a sign saying, "No Gays Allowed," and told folks he was banning "the homosexual people." (Image above from 2015.)

Shortly after, Amyx replaced it with a sign that took a bit more of a "legal" tone: "We reserve the right to refuse service to anyone who would violate our rights of freedom of speech & freedom of religion."

He wants you to know he doesn't hate gays, he hates sin, by the way.

And, "on Monday, Amyx posted a sign saying 'No Gays Allowed' at his store again," Syrause.com reports.

This week's Supreme Court ruling in favor of an anti-gay Christian baker prompted Amyx to post the new "No Gays Allowed" sign, because why not? Amyx, a Baptist minister, told WBIR that after the cake baker's win, he's seeing "a ray of sunshine" and a "great win."

Which has emboldened him once again.

"This is 'happy days' for Christians all over America, but dark days will come," Amyx warned this week. "Christianity is under attack. This is a great win, don't get me wrong, but this is not the end, this is just the beginning," he claims, of the supposed war on Christians.

Back in 2015 when marriage equality became the law of the land Amyx was certain he and his fellow Christians were being persecuted. (Despite selling bumper stickers in his shop that read, “Choose God or Gays,” Amyx may be surprised to learn that many gay people are also Christians.)

"They gladly stand for what they believe in, why can't I? They believe their way is right, I believe it's wrong. But yet I'm going to take more persecution than them because I'm standing for what I believe in," Amyx said then.