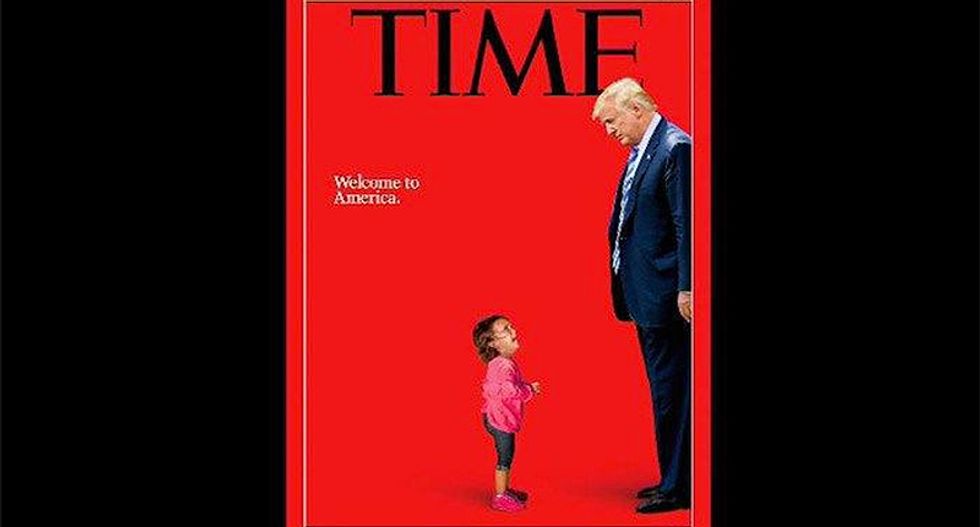 Pulitzer Prize-winning Getty photographer John Moore was the man responsible for the photo of the sobbing little girl watching her mother be frisked at the border. After going viral, TIME magazine used a remixed version of the photo on the cover of their magazine, and now some want the little girl to be compensated for it.

“As a father myself, this photograph was especially difficult for me to take,” Moore wrote when he posted the photo on his Instagram channel. He shot several photos of the girl.

A Honduran asylum seeker carries her daughter, age 2, before being taken into custody by Border Patrol agents near… https://t.co/equmt0f6Kq
— John Moore (@John Moore) 1529154948.0

A Honduran asylum seeker, 2, and her mother are taken into custody near the US-Mexico border. The Trump administrat… https://t.co/2pPfusxaQn
— John Moore (@John Moore) 1528913431.0

He said that the 2-year-old girl is a Honduran asylum seeker that was taken into custody along with her mother.

"They had just crossed the Rio Grande from Mexico and were to be transported to a U.S. Customs and Border Protection processing center," Moore wrote. "The Trump administration’s 'zero tolerance' policy for undocumented immigrants calls for the separation of parents and children while their cases for political asylum are adjudicated, a process that can take months - or years."

Some activists want to see the girl get paid for her image being splashed across the media.

"How about if Time Magazine pays this little girl - just as the magazine would pay a supermodel who appeared on its cover?" tweeted Nancy Levine. She was inspired by photographer John Ehrenfeld, who suggested that the girl be compensated by those using her photo. The tweet has been retweeted by Moore, who appears to agree with the sentiment.

.@KiraPollack @jbmoorephoto How about if Time Magazine pays this little girl - just as the magazine would pay a sup… https://t.co/LxtZg7HBdZ
— Nancy Levine (@Nancy Levine) 1529597411.0

In an interview with Raw Story, Ehrenfeld said that he felt as many Americans do seeing the photo. He described her as being a child that could belong to anyone.

"It had a big impact on me, that cover," he said of the girl featured standing up to "bully" Trump. "And it breaks so many people's hearts, not only for that particular girl but because she looks so much like anyone's daughter.  So, I just thought, everyone's going on Facebook and Twitter and expressing outrage but the consensus is that people feel helpless. People can vote in November, but it's frustrating."

He initially thought about setting up a GoFundMe for the girl, but then took a different tactic.