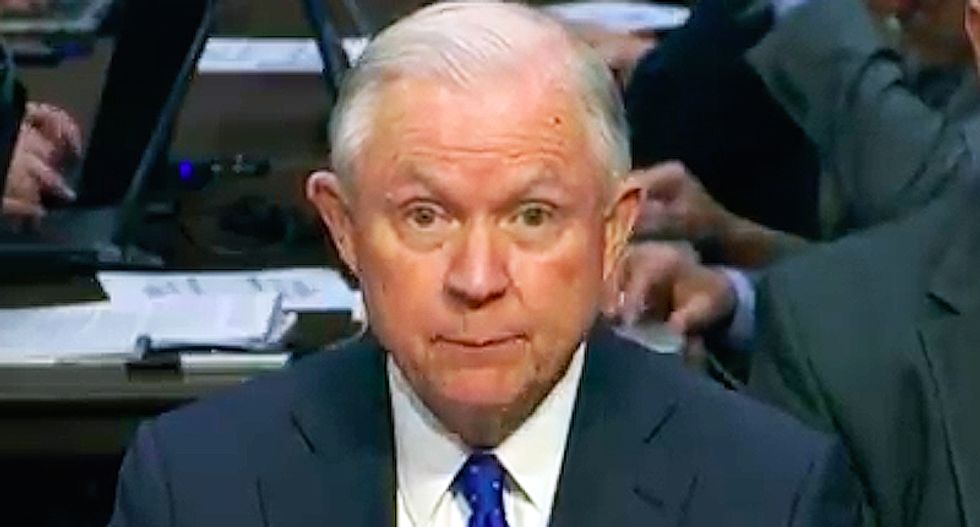 Trump delivered many disturbing, un-American declarations during the 2016 campaign but that had to be one of the most chilling, immoral comments any American politician has ever made. He hasn't changed his attitude since he became president. The Washington Post reported this just last April:

The president ... was reportedly shown a recording of a previous drone strike and asked “Why did you wait?” after the video showed the strike was delayed until the target’s family home was out of range. ...

Later, when the agency’s head of drone operations explained that the CIA had developed special munitions to limit civilian casualties, the president seemed unimpressed.

He stated repeatedly on the trail that families were "in on it," that "the wives know," and so on, expressing the opinion that they had to be dealt with harshly in order to persuade the bad guys to stop their terrorist ways. He never explicitly said that the U.S. government should remove children from their families but apparently he thinks that's a good idea too. He's actually put that form of "going after the families" into practice on the Mexican border.

The issue of children from Mexico and Central America turning up at the border unaccompanied and asking for asylum has been a thorny issue for some time. Those kids' parents sent them away to escape violence in their home countries and our government has never dealt with it successfully.

Under Barack Obama they were housed in unpleasant conditions and the government apparently "lost track" of some of them, although immigrant advocates say that particular story is overblown because most of those kids simply ended up with relatives and fell off the grid. Nonetheless, at least the Obama administration understood it was dealing with a humanitarian crisis and made some effort to mitigate the problem, however ineffectually.

Something much more insidious is taking place today. On May 7, the Trump administration announced its new hardline immigration policy:

Attorney General Jeff Sessions announced Monday that the Justice Department will begin prosecuting every person who illegally crosses into the United States along the Southwest border, a hard-line policy shift focusing in particular on migrants traveling with children. ... Federal prosecutors will “take on as many of those cases as humanly possible until we get to 100 percent,” he said.

I hope I don't have to point out that it's not the child's fault either. But that doesn't appear to concern Sessions or Homeland Security Secretary Kirstjen Nielsen any more than killing family members to deter terrorists concerns their boss. Nielsen declared that Americans are separated from their children every day when they commit crimes -- so if you don't commit a crime, it won't happen to you. Defining keeping your family together as "smuggling" is glib, but that doesn't mean it makes sense.

These aren't members of MS-13, the violent street gang that Trump calls "animals" and loves to talk about in creepy, lurid detail. Some of these children and families, in fact, are appearing at the border seeking asylum from MS-13 in their home countries. (Many gang members are hardened into violent criminals in the American prison system and are then deported back to their home countries where they rule the streets.) Trump and Sessions don't have any compassion for those women and children, for reasons that aren't hard to figure out. They hail from "shithole countries" and in their minds aren't much better than "animals" themselves.

It is not a crime to appear at the U.S. border and seek asylum. Yet people who do that are essentially being treated exactly the same as people who have crossed the border illegally simply to seek work. Neither of these categories should be prosecuted as criminals but the former are especially vulnerable people, often women with their kids, trying to escape violence and keep their families out of the line of fire. They are allowed by law to have a fair hearing of their asylum application and they are not getting it.

According to NBC News, the system is so backlogged and overwhelmed that hundreds of kids under the age of 12 are stuck in various overcrowded detention centers and it's getting worse every day. Salon's Matthew Rosza wrote about the fact that Sen. Jeff Merkley, D-Ore., attempted to visit one of these detention centers last weekend only to be turned away. It's clear they're hiding something.

This podcast interview between MSNBC's Chris Hayes and ACLU immigration lawyer Lee Gelernt is extremely informative about the surreal nightmare of this byzantine system, which is of course a feature, not a bug. According to Gelernt, the government's Kafkaesque policy is to immediately separate mothers from their kids, some as young as a few months old, then rush the applicant through a phony hearing so their application can be denied and they can be prosecuted for illegal entry -- even though they openly presented themselves to authorities to seek asylum. And even in the unlikely event they win their cases, they don't necessarily get their kids back.

The whole point of this is to make examples of these mothers and children, and to deter asylum-seekers from even attempting to come here. And this is in spite of both domestic and international laws governing the rights of refugees. Apparently, those laws are no longer operative in the United States.

Trump always said, "I will be very tough on families," but I think everyone assumed he just meant that to apply to families of suspected terrorists -- not that that makes such a policy any less grotesque and immoral. It appears that he meant it as a broad-based deterrent to be used against all people he sees as enemies of the state. He now has administrators, prosecutors and an armed force eager to carry it out.

America's borders have officially become a cruel, dystopian nightmare for immigrants and refugees. The president and his supporters couldn't be happier.