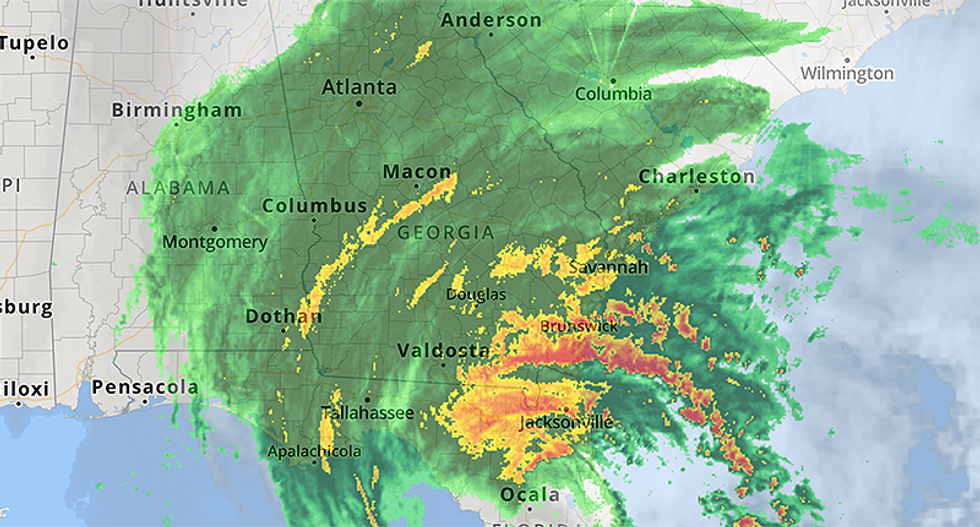 The Trump-appointed acting director of the National Oceanic and Atmospheric Administration—which plays a key role in monitoring the global climate crisis—has reportedly proposed stripping "conservation" and "climate" from NOAA's mission statement, which scientists say "would undermine the agency's vital work on behalf of the American people."

During a recent Department of Commerce meeting, Rear Admiral Timothy Gallaudet—President Donald Trump selected him for NOAA's number two spot, but he is leading the agency while the controversial pick for director is tied up in the Senate—reportedly gave a presentation in which he proposed notable alterations to NOAA's mission statement.

The suggested cuts seem to align with the Trump administration's broader war on science, and could signal a significant shift in the future endeavors at an agency which, as the New York Times noted, "because of its work on climate science data collection and analysis... has become one of the most important American agencies for making sense of the warming planet."

Given NOAA's notable contributions to climate research, the proposal was met with swift condemnation by the scientific community. Andrew Rosenberg, director of the Center for Science and Democracy at the Union of Concerned Scientists—and a former NOAA scientist and senior executive—called it "shocking" and "foolhardy."

"Understanding the changing climate is becoming more critical by the day, as the effects of global warming mount, and it's essential to protecting our economy and security," Rosenberg said. "NOAA is continuously working to improve forecasts of extreme events, which are intensifying in a warming world. As we know from last year's wildfires and hurricanes, these kind of forecasts are critical for protecting American lives and infrastructure."

"Removing 'conservation' from its mission statement is equally alarming. We have made outstanding progress in ocean conservation, from fisheries to whales and other endangered species over the past few decades," he added. "NOAA's revised mission seems to be all about deregulation, which could have a big impact on fish stocks."

Gallaudet's "misguided and harmful" proposal, Rosenberg concluded, "is another unconscionable action taken by the administration under the guise of national security."

This is worrisome; @NOAA is a critical resource for the collection and analysis of climate data. If some policymake… https://t.co/cmHuOI15mD
— Zeke Hausfather (@Zeke Hausfather)1529873218.0

Redefining @NOAA’s mission is a serious threat to the breadth of science, services and stewardship that NOAA provid… https://t.co/navSQ24qio
— Jane Lubchenco (@Jane Lubchenco)1529895470.0

If the revised mission takes effect, NOAA won't be the first federal agency to alter its publicly declared purpose under Trump. Earlier this year, the U.S. Citizenship and Immigration Services (USCIS) came under fire for cutting "nation of immigrants" from it mission while the Consumer Financial Protection Bureau (CFPB) has abandoned its founding purpose—to protect consumer from corporate predators.

In March, it was reported that Secretary Ben Carson was planning to replace an anti-discrimination promise in the Department of Housing and Urban Development's (HUD) mission statement to language that emphasizes "self-sufficiency," but the change has not been made on the agency website and Carson has reportedly asked staff to submit alternative suggestions.