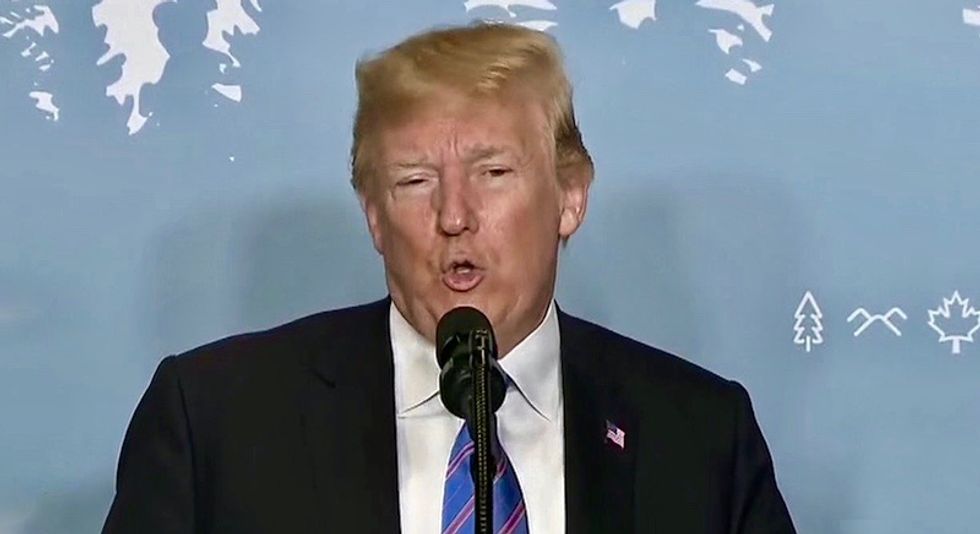 Donald Trump speaks at the G7 meeting in Canada (Screenshot)

President Donald Trump may fail to qualify as a dictator, but it’s not for lack of trying.

In late 2016, Harvard University's Robert and Renée Belfer professor of international relations Stephen M. Walt wrote a 10-point list for analyzing whether a president is a dictator.

Less than half-way through his first term, Trump has fulfilled seven of the 10 criteria.

The president routinely bullies the press, creating environments that range from hostile to physically unsafe.

This began during the campaign and continues to this day, as Trump riles rally crowds against the press and repeatedly attacks them on social media.

“These people, they hate your guts,” he recently told a rally about the press.

The president reportedly told a reporter off-camera that he intentionally bullies the press to “demean” and “discredit” them.

This requires little explanation, as the president attacks national security entities on a near-daily basis.

The FBI is a favorite target. Trump has gone so far as to falsely claim the agency was illicitly spying on him during the 2016 election.

Since his election, the president has attacked nearly 20 corporations.

In one notable example, Trump cost Amazon “billions of dollars in market cap as investors sold off stock.” Trump did so by engaging in a public PR attack on the company through his Twitter account.

The president has also attacked the press by threatening to change libel laws. He considers journalists to be an opposition force, labeling major networks like CNN and NBC “fake news.”

After Republicans denied a vote on President Barack Obama’s nominee to the Supreme Court, they swiftly moved to install a Trump nominee following his swearing-in.

Trump took advantage of the GOP’s bad faith action, appointing Justice Neil Gorsuch rather than calling for a hearing of Obama-appointee Merrick Garland.

His decision to capitalize rather than correct the unethical move by his party is an unusual example of court-stacking.

Trump opened his campaign with a call to fear.

“They’re bringing crime. They’re rapists,” is among the most memorable lines from his opening campaign attacks on people of Mexican descent.

His policies as president reflect this xenophobia, including repeated attempts to ban travel from Muslim-majority countries.

Trump’s fixation on forcing Mexico to pay for a southern border wall to fight a nonexistent immigration crisis is yet another example of fear-mongering through isolationism.

The president has directly called critical media the “enemy of the American people,” to say nothing of the insults he regularly lobs at any political opponent who dares to stand in his way.

Trump’s ascent to the presidency was arguably birthed from the demonization of former President Barack Obama, who Trump portrayed as an illegitimate foreign invader who illegally took the oath of office.

He’s made a show of attacking black football players, by intentionally misrepresenting their protests against racial discrimination as attacks on the United States as a country.

The president has weaponized the power of the pardon as an opportunity for political gain and signaling.

His use of pardons to negate legal judgments against political allies, like Joe Arpaio and Dinesh D’Souza, represents a break from the norms of pardoning individuals as a form of corrective justice rather than erosion of the law.

Trump also claims that allies who break laws are treated “unfairly” when they face legal consequences for their actions.

This contrasts with his “law and order” rhetoric directed at immigrants, against whom he uses human rights violations and deportation as political weapons.

Chris Sosa is the Senior Editor at AlterNet. His work also appears in Mic, Salon, Care2, Huffington Post and other publications. Follow him on Twitter @ChrisSosa.