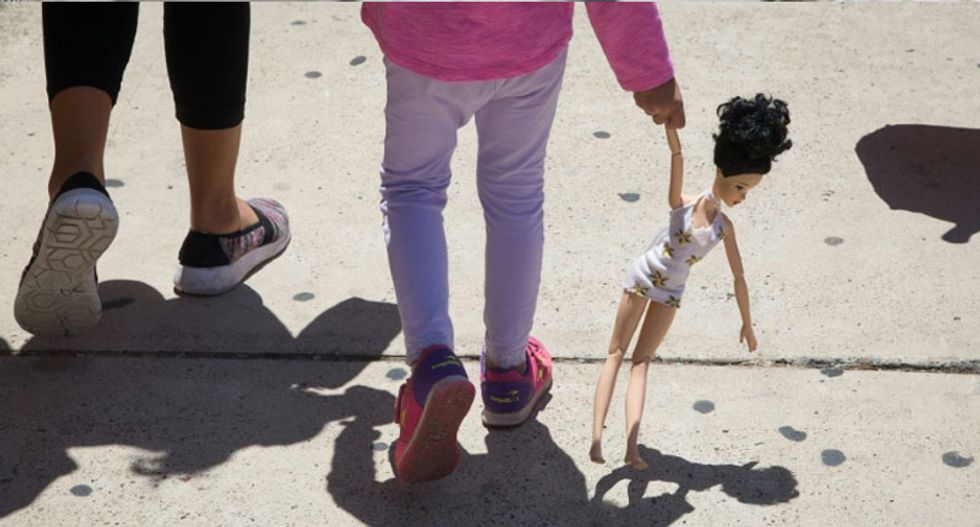 The UN rights chief on Monday condemned the "unconscionable" separation of migrant children from their parents at the US border, as First Lady Melania Trump made a rare political plea to end the deeply controversial practice.

The "zero-tolerance" border security policy implemented by President Donald Trump's administration has sparked tears among migrant families and outrage on both sides of the political aisle.

It took on particular resonance as America celebrated Father's Day.

"The thought that any state would seek to deter parents by inflicting such abuse on children is unconscionable," Zeid Ra'ad Al Hussein said as he opened a session of the UN Human Rights Council in Geneva.

He called for Washington to immediately end the practice of "forcible separation of these children."

Democrats, meanwhile, stepped up their opposition to the policy, describing it as "evil."

"They call it 'zero tolerance,' but a better name for it is zero humanity, and there's zero logic to this policy," said Senator Jeff Merkley of Oregon, after leading a group of Democratic lawmakers to the Mexican border.

They toured a converted Walmart supermarket that is now housing about 1,500 immigrant children, after which Merkley said "hurting kids to get legislative leverage is unacceptable. It is evil."

Bracing for more child arrivals, the government plans to build camps at military bases in Texas.

Authorities said that during one recent six-week period nearly 2,000 minors were separated from their parents or adult guardians -- a figure that only stoked the firestorm.

Trump has said he wants the separations to end, but continues to blame opposition Democrats for the crisis, which critics say is of his own making.

Amid deep divisions, congressional Republicans have struggled to craft a viable immigration plan.

Trump's wife, who seldom wades into the political arena, opted to call for bipartisan immigration reform to fix the issue, rather than denounce the policy.

"Mrs Trump hates to see children separated from their families and hopes both sides of the aisle can finally come together to achieve successful immigration reform," her spokeswoman Stephanie Grisham said.

The president himself later tweeted: "The Democrats should get together with their Republican counterparts and work something out on Border Security & Safety. Don't wait until after the election because you are going to lose!"

Immigration is one of the most divisive issues roiling American politics.

The number of separations has jumped since early May, when Attorney General Jeff Sessions announced that all migrants illegally crossing the US border with Mexico would be arrested, regardless of whether the adults were seeking asylum.

Since children cannot be sent to the facilities where their parents are held, they are separated, which the American Academy of Pediatrics has warned causes "irreparable harm" to the children.

One Honduran asylum seeker killed himself in detention after US authorities separated him from his wife and three-year-old son last month, The Washington Post reported.

Homeland Security Secretary Kirstjen Nielsen insisted that "we do not have a policy of separating families at the border. Period."

"For those seeking asylum at ports of entry, we have continued the policy from previous Administrations and will only separate if the child is in danger, there is no custodial relationship between 'family' members, or if the adult has broken a law," she wrote on Twitter.

Some of Trump's fellow Republicans also have said the policy must end.

The administration has decided "to separate children from their parents to try to send a message that if you cross the border with children, your children are going to be ripped away from you," Senator Susan Collins told CBS television's "Face the Nation."

"That's traumatizing to the children who are innocent victims, and it is contrary to our values in this country."

Laura Bush, the former first lady and wife of Republican ex-president George W. Bush, was unflinching in her rejection of the policy.

"I appreciate the need to enforce and protect our international boundaries, but this zero-tolerance policy is cruel. It is immoral. And it breaks my heart," Bush, who lives in Texas, wrote in a Washington Post opinion piece.

"These children should not be a negotiating tool. And reuniting them with their families would reaffirm America's belief in & support for all parents who love their children," he tweeted.

In one incident that highlighted the crisis, five immigrants died and several others were injured after a high-speed chase with Border Patrol agents in Texas ended in a crash, US media said.