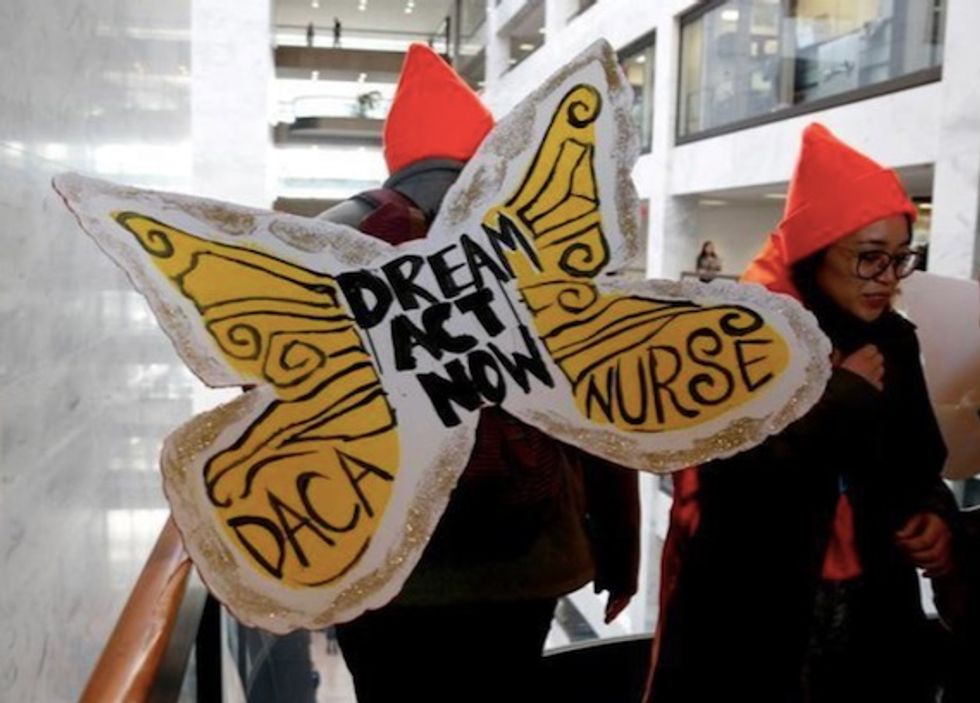 FILE PHOTO: Protesters calling for an immigration bill addressing the so-called Dreamers, young adults who were brought to the United States as children, walk through the Hart Office Building on Capitol Hill in Washington, U.S., January 16, 2018. REUTERS/Joshua Roberts

Negotiations in the U.S. House of Representatives on immigration legislation were on the verge of collapse on Tuesday as Republicans fought over how much protection to give undocumented “Dreamer” immigrants and as President Donald Trump ramped up his war against illegal and legal immigrants.

High-level talks were set for later on Tuesday involving House Republican leaders and warring centrist and conservative lawmakers in the party that controls both chambers of Congress.

Some House Republican aides portrayed the closed-door session as crucial amid the deadlock. Failure to craft a compromise could result in renegade centrists forcing votes on the House floor on a bill that could pass with mostly Democratic support.

Even if House Speaker Paul Ryan manages to write a compromise bill toughening U.S. border security and ending the threat of deportation for “Dreamers” - undocumented immigrants brought into the United States as children - his solution could be rebuffed by Democrats who are needed to enact any immigration bill.

House aides familiar with this months-long effort to dislodge immigration legislation from a conservative blockade acknowledged that Democrats were not part of the consultations.

Republican Senator Jeff Flake, a central figure in efforts to protect Dreamer youths now that Trump wants to end the Obama-era Deferred Action for Childhood Arrivals (DACA) program that temporarily protects them from deportation, scoffed at the idea of the House moving ahead with a Republican-only bill.

He added: “If it’s anything like what was part of the Goodlatte bill, that’s just not going to fly.”'

House Judiciary Committee Chairman Bob Goodlatte has been pushing legislation to continue Dreamers’ temporary legal status, but without any prospect for U.S. citizenship.

Embraced by the White House, the measure would reduce the amount of legal immigration and prevent U.S. citizens from sponsoring some relatives living abroad who want to relocate to the United States.

A similar measure failed in the Senate last February.

On a related front, the Trump administration in recent months has ramped up a practice of separating immigrant children and parents who cross U.S. borders without visas and of holding them in detention centers.

Senator Dianne Feinstein, the senior Senate Judiciary Committee Democrat, pledged to fight for legislation she introduced last week to end the practice. At a press conference on Tuesday, Feinstein acknowledged she neither had any Republican backers or a promise from Chairman Chuck Grassley to hold hearings on the measure.

“Children are terrified, parents are heartbroken and families are being destroyed,” Feinstein said.